Hospitals leave Pegasus at the Paddock with a thunderbolt from Cosgrove 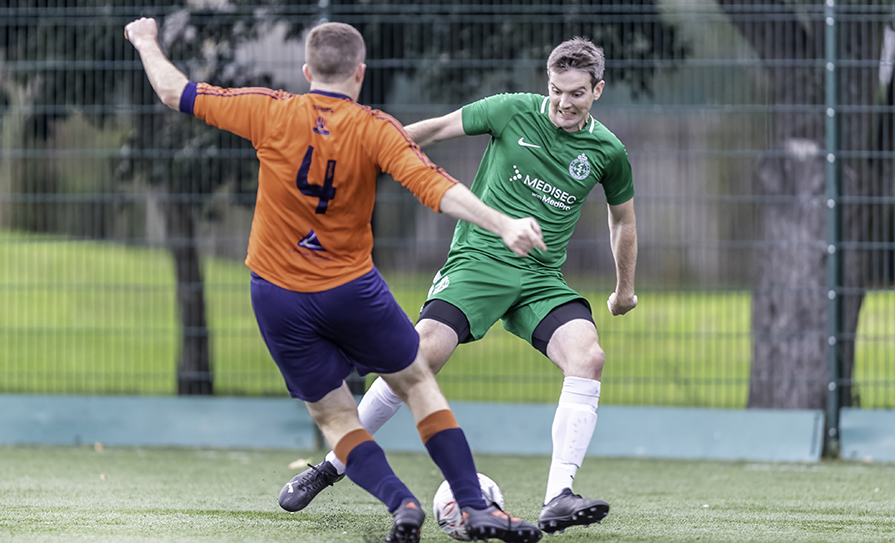 Dublin Hospitals FC (DHFC) welcomed Pegasus/St James’s Athletic FC to Pearse Park on a pleasant Saturday morning for a Leinster Senior League game. DHFC were keen to get back to winning ways following a disappointing defeat away to Ashbourne United a week previously.

With just the bare 11 available for the game, managers Rory Durand and John Cosgrove didn’t have any difficulty choosing which players to start, but faced defensive dilemmas with only one recognised centre-back available. A few eyebrows were raised when Barra Neary was put on the left-wing, a consistent performer at left-back for much of last season.

DHFC started the game brightly and Neary justified that decision by putting the ball in the net inside the first 10 minutes. However, it was dubiously ruled out for offside. The industrious Ger Cheevers came close soon after with an attempted lob off the keeper that went just over the bar. John Cosgrove tormented Pegasus’ left-back with fantastic passes over his head to Cheevers throughout the game. Midway through the first-half, one of these passes led to a corner, which Cheevers took quickly before Pegasus could react and passed to Cosgrove. A great ball across the face of goal by Cosgrove was met by Neary, who calmly finished past the keeper once again to open the scoring.

DHFC continued to dominate the ball after the first goal and added a second before half-time through a sublime John Cosgrove free-kick. Luke Sheehan-Purcell won the ball back at the edge of his own box, and following some fine build-up play, won a free at the edge of the opposition’s box. Cosgrove’s left-footed strike nestled into the top corner beyond the reach of the keeper. Reports are circulating that his brother Colm has been claiming the goal, but John has dealt with this by sharing a video of the goal on Instagram every day since!

Pegasus began the second-half aggressively and pressed higher up the pitch, making it more difficult for DHFC to play out from the back, which was a prominent feature of the first-half. However, DHFC continued to apply the pressure and Rafael Loboto had a great chance to add a third goal following a great cross from Ger Cheevers, but his effort went narrowly wide. Soon after this, Rory Durand held his marker off well to volley past the keeper from a John Cosgrove corner to make it 3-0. This goal was well-deserved for his tremendous work rate throughout the game.

DHFC controlled the game well and limited Pegasus to speculative efforts. The defence was marshalled well by the experienced Colm Cosgrove, and on the few occasions where Pegasus created chances, the ever reliable Paul Schutze was on hand to keep the clean sheet intact.

Player of the match: Ger Cheevers.

PS: Dublin Hospitals FC would like to thank our wonderful sponsors Medisec Ireland. Match highlights provided by medicalaccountant.ie are available now at the official club YouTube channel @dublinhospitalsfc. Don’t forget to subscribe to keep up to date. Go online to www.dublinhospitalsfc.com for all the latest DHFC news, records, results and other features.