A successful campaign in the books 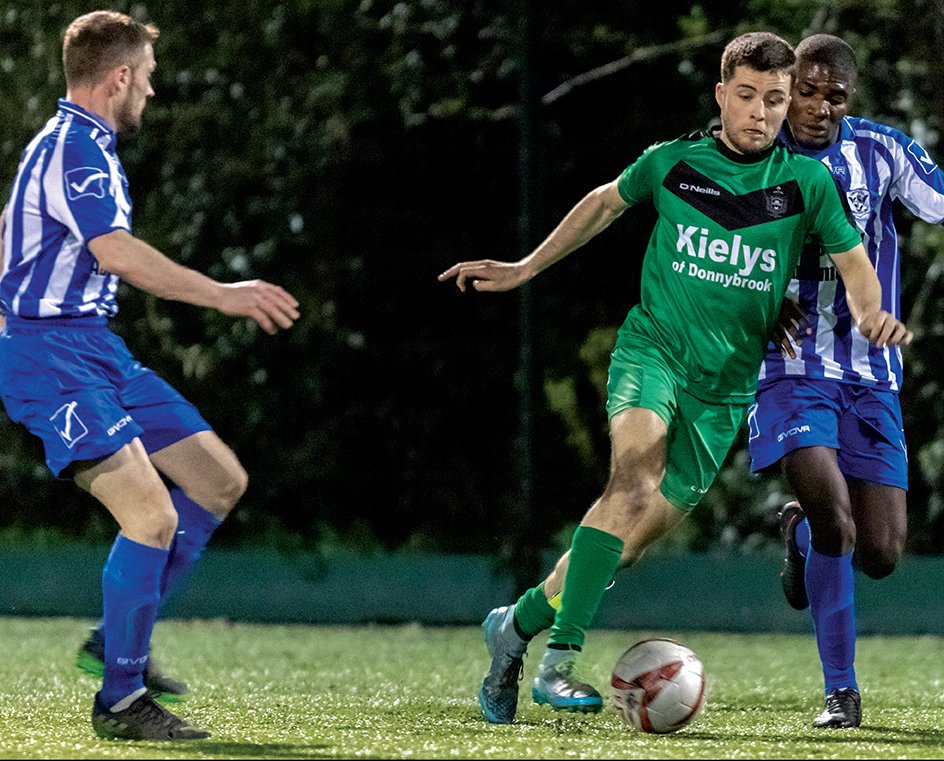 St Vincent’s competed at the highest level in their history this past season. Winning the Leinster Senior League Saturday Major 1D division in 2017/18 earned two-level promotion to Major 1B. Well aware of the challenge, the team logged a strong pre-season and felt ready for the season ahead. After a close opening defeat to local rivals Seafordrock United, Vincent’s smashed Inchicore Athletic 4-0 with goals from Fionn Lynch, Darren McMahon and an Aidan McGrath brace. The result left the squad feeling confident that they belonged.

Unfortunately, the team would go on to lose five and draw one of the following six league games. Player availability, squad consistency, poor performances and bad luck combined to leave the club in a perilous position. A win over Dunboyne AFC followed by two more defeats left the club firmly in the relegation zone entering the Christmas break.

Having taken seven points from 11 games in a 20 fixture league, the team recognised the need to come together and turn things around. Focus sharpened as securing safety became the priority. Match-day availability and performance improved. John Cosgrove and Fionn Nally sparked a key 3-1 win over fellow strugglers Lucan United in the first game after the Christmas break.

An extremely tough run of close fixtures saw the team claim two points from five games. With three games to go, nothing less than nine points, and helpful results in other games, was needed to survive. Rory Durand, Mark Dwyer and Eddy Wrynn keyed a 4-3 win over Beggsboro AFC. Next up, James Clarke scored a 25-yard screamer on the half volley to lead the team to a 2-1 win over CIE Ranch. In the final game of the season, a winner-takes-all affair against Dunboyne AFC, Rory Durand scored the goal of the season in a tight, tense, terse 1-0 win. Survival felt every bit as good as winning the league the previous season.

Goal-scorers typically soak-up much of the limelight, but the defensive and midfield efforts of players such as Andy Delany, Kieran Keane, Colm Cosgrove, Dan Hales, Peter Kelly, Gav Kane and David Kennedy were essential to the turnaround in fortune.

League survival, or a ‘lower mid-table finish’ as we now refer to it, is a huge achievement. Dead and buried with three games to go, players showed character, heart and commitment to pull together and win three on the bounce. The team have shown they are capable of competing at the Major 1B level, and look forward to battling at the other end of the table next season.

The Tom Carroll is cup competition for teams competing in Major 1A to 1D divisions, and represents a realistic chance of silverware on an annual basis. Midweek games make it difficult for single-team clubs to go on strong cup runs. League form invariably suffers if a small player pool focuses on cup fixtures. That being said, Vincent’s recorded comfortable wins over Trinity Donaghmede and Ringsend Rovers to reach the quarter-final stage and set up a tie with Rosemount Mulvey. Historically a top club, Rosemount have found their feet again after a few difficult years. Following a late Rosemount equaliser in normal time, Vincent’s eventually lost in a penalty shootout. The bitter defeat was compounded by the fact Rosemount went on to win the trophy without having a tougher game. It has been a long time since Vincent’s tasted cup success, and they may look back at this as one that got away.

Noel Ryan was one of the founding members of Crumlin United, Robbie Keane’s schoolboy club. The cup competition carrying his name pits the best LSL Saturday division teams against each other. A convincing 3-1 win over Inchicore Athletic saw the team progress to take on Tek United in round 2. Competing in the top Saturday division, Tek oozed class and were too strong for St Vincent’s. The Noel Ryan cup is often a short-lived affair for the club, though it is a great opportunity to take to the field against top-class opposition.

A number of players distinguished themselves in terms of consistency, leadership and performance over the course of the season. Kieran Keane topped the appearances chart, playing in 22 of 25 games. Aidan McGrath and Rory Durand shared the golden boot, with nine goals apiece. Senior Player and Young Player of the Year awards, voted on by players, will be handed out during a ceremony at the annual general meeting in McSorley’s pub, Ranelagh, on Saturday 8 June. Many are in contention and the ultimate award winners will merit the honour.

After three seasons at the helm, Sean Keane is stepping down as club manager. Sean would like to make it clear that he has not been sacked, and is moving to Melbourne in July for an ICU fellowship. A rocky first season was followed by two far more successful campaigns, and the club is in a better place after making strides in a number of areas.

Rory Durand and John Cosgrove are taking on the role. The dynamic duo are filled with fresh ideas and will put their own stamp on the squad. They are hard workers, excellent coaches and extremely passionate about football. The club could not be in better hands going forward.

Every summer, just like our hospital system, the team loses talented individuals to foreign travel. Fionn Lynch and Darren McMahon are off to the Southern Hemisphere as part of the annual NCHD exodus. Fionn, currently an intern at St Vincent’s University Hospital, is moving to Adelaide. In his first season with the club, he performed at a high level and carried a constant attacking threat. Quality strikers are hard to find, and he is a big loss. Darren has been one of the team’s brightest and most consistent players since his 2017 debut. He is a fantastic defender, rarely misses a game, and even chips in the very odd goal. The St James’s Hospital anaesthesia trainee is moving to Perth and will be sorely missed. We wish them both the very best of luck.

League survival in a very competitive division is a huge achievement. The LSL Saturday Major 1B represents a very good standard of amateur junior football. There is no such thing as an easy game, and players have the opportunity to test themselves on a weekly basis. The team is delighted to compete at the same level next season. Promotion and relegation mean next seasons 1B division will welcome some teams and say goodbye to others. A successful campaign can be measured by many metrics, though St Vincent’s annual goal is to achieve promotion and move up the league ranks. It is difficult to know the standard required to achieve this, though a consistent effort across the entire season will give the team every chance of claiming the required top-three finish.

Away from the field of play, the club will look to improve in a number of areas. Training recently moved to the all-new 11-a-side astro pitch at St Kilians German/Irish school in Clonskeagh. This was a huge upgrade over previous winter training facilities, and the club is aiming to expand on this partnership for the season ahead. Home games will continue to be played under the Friday night lights of St Benildus College. Form at home took a backward step this season, and the goal is to get back on track and go undefeated.

The club owes a massive thanks to our wonderful sponsors, who make a huge contribution to the successful running of the club: Consultant benefactors from St Vincent’s Hospital, the Medical Protection Society, Progressive Financial Services, Doyle Interior Systems and Medserv. They are wonderful partners and we would like to sincerely thank them.

New players are always welcome. Player recruitment is essential to the club’s success, and the team needs new faces every season. People move on due to peripheral rotations, retirement, foreign travel, fellowships and a host of other personal and work-related issues. Pre-season training begins in mid-July. A friendly tournament takes place in early August, and competitive fixtures kick-off later in the month.

There is an opportunity for new sponsorship partners to come on board for the coming season. There are a number of ways to get involved, and the club would love to hear from interested parties.

If you would like to get involved, please get in touch via our email, svuhfc@gmail.com, or the St Vincent’s Hospital FC Facebook page.

The 2019 World Medical Football Championship takes place in Riviera Maya, Mexico, from 29 June to 7 July. A strong squad of 25 doctors will make the trip. There is form in this tournament, as the team has reached the quarter-final stage on two previous occasions. Unique tournament rules dictate there must be two players older than 40, and two older than 35, on the pitch at all times. It is not all fun and games however, as a conference runs concurrently and is no doubt well attended. The team have been training well, performing to a high standard over a series of friendlies, and are confident of achieving success in the competition.

The Irish Medical Football World Championship organisers can be contacted via email at irishmedicalfootball@gmail.com. Progress and regular updates can be followed via Twitter @Irelandmedical.