Tiguan Allspace Is Still A Perfect Solution For Many, If Not All, Your Needs 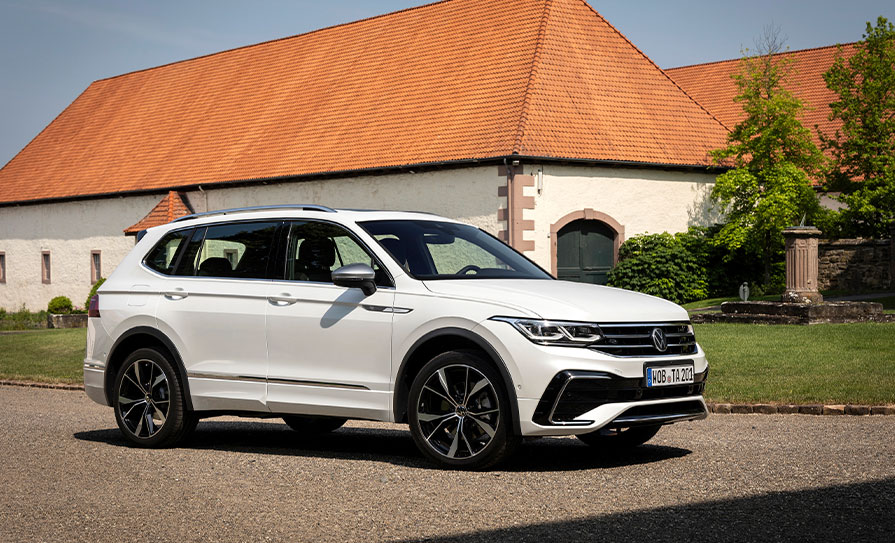 Getting into a large, diesel SUV has a slightly retro feel to it. My daily drive is a Škoda Enyaq, a fully ‘electric’ electric vehicle (EV). It is a car I have had for just about a year and have now become accustomed to. It is silent, potent and, of course, limited in some ways, and every drive involves that (increasingly less frequent) frisson of anxiety about range.

So, jumping into the latest Tiguan Allspace, a car that has been around in its current guise since 2017; albeit here with a raft of new upgrades, it does feel a little bit like a ‘Farewell Tour’ for this model as a diesel.

The Tiguan has been a huge success for Volkswagen, both internationally and domestically. For the environmentally conscious of you, concerned at the thought of a large, diesel SUV, here is a sobering fact: None of the ID.3 or ID.4 electric models would have come about if it wasn’t for the money made from selling these, very profitable, SUVs.

Here in Ireland the Tiguan quickly overtook the beloved Golf as the brand’s top-selling model. And now the Tiguan has been overtaken by the fully-electric ID.4. So what now for the Tiguan?

Well, whatever about the regular Tiguan, the Allspace still has an ace up its sleeve at the back, because, for now at least, you can’t get a seven-seater EV from Volkswagen (The ID.Buzz will eventually see to that, but expect both the price tag and availability to be equally depressing). Yes, of course, some of you aren’t yet quite ready to become EV owners. Either way, for now, a large seven-seater SUV that is capable of north of 800km on a full ‘tank’ means you are going to be buying a diesel. So what do we make of this one?

Well, let’s deal with the latest upgrades to the model and they are apparent as soon as you blip the key, where a large LED strip of light glows across the handsome radiator grille, which now gets the new Volkswagen logo. It wasn’t fitted to our test car, but you can also have the IQ.LIGHT LED matrix headlights (basically super-duper headlights). But even the regular ones look great and bring the Tiguan in line with the rest of the range. In some markets, you can have the Allspace as a five- or seven-seater, but here in Ireland it only (and thankfully) comes with the extra seats, which fold flat when you don’t need them, leaving an enormous luggage capacity of 700 litres with the seats folded away. Due to a slightly redesigned front, the Tiguan Allspace has grown by 22mm, but overall the dimensions are pretty much unchanged.

The most significant changes to the Tiguan Allspace have taken place inside the car. There are new infotainment systems, a new ‘digital cockpit’ and some of the most comfortable seats you will find around. If you want to treat your back with love, order up the ergoActive seats with electric four-way lumbar support adjustment and massage function.

As mentioned, our Allspace came with the tried and trusted 150hp 2.0-litre TDI, which has been given some subtle tweaks to try and keep emissions in check. CO2 emissions are 155g/km, putting it in VRT Band 17 with an annual motor tax of €280. That is quite decent considering the car’s considerable bulk.

This doesn’t feel like a rapid vehicle anymore in the era of neck-snapping electric car acceleration, but it never feels slow. 0-100km/h takes just under 10 seconds, which is fine for a vehicle that weighs in at 1,735kg. But this weight is significantly less than the equivalent ID.4, which can be around 2,200kg, but will get to 100km/h in around three seconds less in GTX form.

The addition of new items such as ‘travel assist’ (which will stop you and move off again in heavy traffic) and adaptive cruise control makes commuting and long journeys especially easy in the Allspace. And, of course, if you have kids and are driving them and their friends quite frequently, then the versatility the extra seats provided is always welcome.

There are a total of four grades of Tiguan. An entry-level manual model just named ‘Tiguan Allspace’ that costs €39,595. Then there is the Life model from €46,225; the Elegance from €58,280 (only available as a DSG auto); and then the model we were in, the R-Line, from €59,075. This gains 20” Suzuka alloy wheels, lots of R-Line logos throughout, a Sports Pack, with progressive steering, sports suspension, and shocks, and inside some ‘Art Velour’ upholstery and R-Line carpet mats.

Should you still be buying a Diesel Tiguan Allspace in 2022 or for 2023? It depends on your needs. If you don’t need the extra space and seats then the ID.4 will be a better buy long-term. But, as we have said, EVs still aren’t for everyone. Buy on a PCP (personal contract purchase) and the residual value risk is with Volkswagen, rather than you and you have a comfortable, handsome seven-seater that has never heard of range anxiety and will be a loyal and faithful family vehicle.