Lexus Refines The Art Of The Plug-In Hybrid 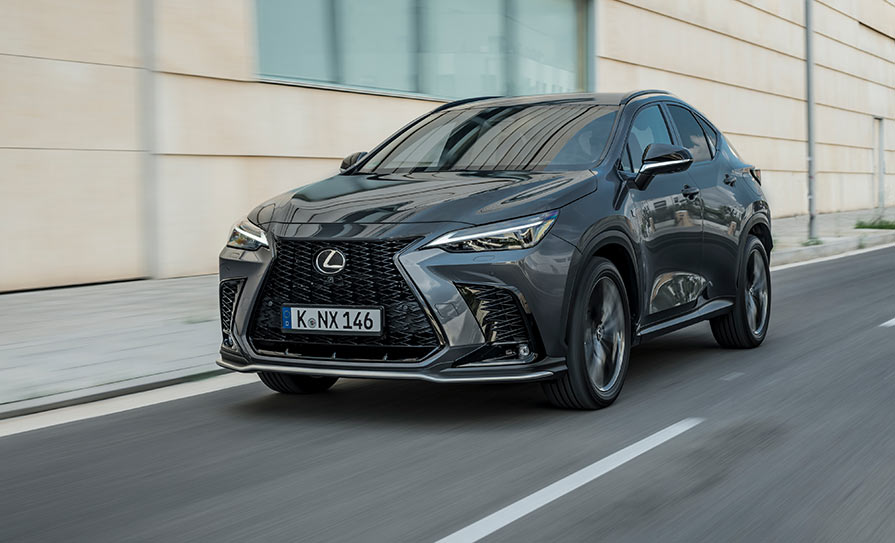 LEXUS REFINES THE ART OF THE PLUG-IN HYBRID

Lexus might still not be top of the list for many executive buyers, but on the evidence of some of its latest offerings, it really should be. The Lexus RX450h+ is an executive-level compact SUV with a plug-in hybrid (PHEV) combination of a 2.5-litre four-cylinder petrol engine, with 40kW electric motors developing 309hp and 227Nm of torque.

It is a five-door, five-seater, which will be big enough for most families with two-to-three kids. It has a starting price of €58,130, but the F-Sport model was a smidge under €71,000. This price very much puts it in the premium/executive level and although we could go into the virtues of something like a BMW 5-Series or Lexus’ ES300h for this sort of money, the appeal of the compact SUV to the Irish buyer at the moment is well-illustrated by the sales figures. For example, the Audi Q3 is that brand’s biggest seller here in Ireland and now this NX is Lexus’ most popular car. According to their Irish boss, it has sold out for this year (April 2022) already.

Lexus, let’s be honest, went through something of a patchy spell design-wise, a few years back. Cars like the CT200 are best forgotten, but the brand is well and truly back in form with the NX450h, which is a gorgeous thing. This is the second generation of the mid-sized luxury SUV, introduced last year as a replacement to the original 2014 NX, which became Lexus’ best-selling car in Europe, with more than 175,000 units sold. Lexus says that this new design is all about “functional beauty, which means blending design with performance. This is a bigger car than the car it replaced; 20mm longer, with a 30mm longer wheelbase and it is also 20mm wider and 5mm taller. The styling is dominated by the Lexus spindle grille, which this time has a more upright position. There are LED headlamps on the higher grade models like the one we were in and the Sport model gains dark chrome exterior details, a mesh grille and 20-inch alloy wheels, with a 10-spoke design inspired by the wheels used on Lexus’ LC flagship coupé.

The cabin of the new model is very impressive. Lexus’ fit and finish were always decent, but it is now pushing out the Audi at the top of the charts. The NX is the

first Lexus to feature the Tazuna concept for the driver’s cockpit, which takes its name from a Japanese word describing the rider’s use of the reins to control a horse. The instruments are clustered very well and within your field of vision and there are fewer switches within the cabin than in the previous cabin (from 78 to 45), with the cabin dominated by a beautiful, large touchscreen, which employs the ubiquitous Apple CarPlay and Android Auto system to good effect. It doesn’t feel like a physically huge car inside. But space upfront is generous and while three adults wouldn’t like being in the rear too long we suspect, it will be fine for all but your gangliest of kids. The luggage space is a generous 545 litres with the rear seats in place and this can expand out to 1,436 if you fold the seats f lat.

This is the best PHEV we’ve driven. It is by far the most refined, the range from the battery is very usable, and while it won’t reach the 69-76km Lexus claims, it is capable of more than 50km if you drive it judiciously and that is very decent. The combination of the 2.5 litre four-cylinder petrol engine and the 134 kW front electric motor, a 40kW rear electric motor, and 18.1 kWh battery work together, or with the battery in isolation, very well. You can choose to have the car drive in EV mode or hybrid mode. Acceleration is brisk enough for an SUV; 0-100km/h takes just 6.3 seconds and all this is with CO2 emissions of less than 30g/km. Handling is decent too, with Lexus’ intelligent E-Four electric all-wheel drive providing very sure-footed handling. The steering is not too light. This was one car we did not want to hand back.

As we said, you can choose between the Executive, the Premium, and the Sport model. We would most likely stick to the Executive, as it is well-equipped and costs just under €10,000 less than the Sport model, which of course is prettier, but none of its extras are really necessary. Sure, in the Sport model you get a 14” touchscreen display, which feels more Tesla-like, but the 9.8” screen in the Executive model isn’t exactly tiny. The Executive has privacy glass, a wireless smartphone charger, smart entry and start system, Tahara leather with heated front seats, and an electric tailgate. So it is very well appointed.

The Lexus NX was crash-tested this year by Euro NCAP and received a five-star result and, as you might expect from such a technology-laden car, this extends to the safety items, with a pre-collision system that can detect motorcycles and pedestrians in the car’s path. There is also adaptive cruise control, which Lexus says has been improved so that it can more quickly recognise and adjust to traffic cutting in front.

This is one of the best cars of 2022 so far. It is, without doubt, the best PHEV on the market and its refinement levels, technology, and comfort make it a winner.