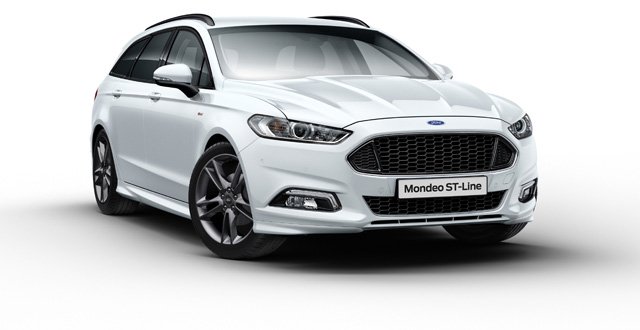 There’s nothing mundane about this Mondeo.

The Mondeo has been around for 25 years, and while many competitors have come and gone, it has held its place at the top of the family saloon pile. It’s rare for a car to become so much a part of society that its name forms a noun, but this automobile has managed that, thanks to Tony Blair. ‘Mondeo Man’ was a term coined by the former British Prime Minister in the early 1990s to describe hard-working Labour voters. However, this automobile has gone on to outlive the stereotype and his tumultuous reign by more than a decade.

On first sight, this big, chic Mondeo surprised me with its brash good looks, while my girlfriend was gobsmacked to discover it was actually a Ford and not some far more pompous marque.

The model that I had was the full bells-and-whistles ST-Line, painted in frozen white and festooned with goodies. If you’ve read my column before, you’ll know that a car’s ability to overtake a cyclist going up a hill, without causing an accident, is very important to me. This car, with its 180hp two-litre turbo diesel engine, had plenty of get-up-and-go, especially considering the size of the vehicle, which is a rather large 4.87m in length and 2.12m wide, while weighing-in at 1,584kg.  Despite this, it is rather good for the environment, as this model only produces 117g/km of the bad stuff, putting it in the €200, A4 road tax bracket.

The interior was lovely, spacious and well put-together and I’m happy to report that it is devoid of the recycled Coke-bottle plastics found in some older Fords. The steering wheel felt a little cluttered and if your hand slips down from the usual driving position, you are liable to inadvertently push some buttons. However, this is something any driver would get used to in no time.

The car had no shortage of storage space, with deep door pockets, cup-holders and a cavernous central cubby-hole. There was endless legroom in the back, eliminating any possibility of a six-year-old kicking your chair on the long drive to west Cork. The manual gearbox was fine, although if I were specc-ing this car out for myself, I’d investigate the automatic transmission.

The Ford Mondeo drives beautifully, and always has. Its torque and acceleration were thrilling, it handled smoothly, there was minimal turbo lag and the car felt light and responsive. It was the kind of car you’d happily drive long distances in with a back seat full of children, as it was built to be a workhorse, a comfortable cruiser and a family taxi. Its ‘hill launch assist’ is extremely handy, especially since they’ve done away with the old-school handbrake in favour of an electric button-activated system. The ‘lane-keeping aid’ and ‘traffic sign recognition’ systems are brilliant for remaining penalty point-free and safe on long trips.

As with most new cars, the Mondeo has front and rear parking sensors and my version had the camera too, so you can avoid that oh-so-taxing, turning your head manoeuvre. It also had a panoramic roof, which brightened-up the interior and gave the vehicle a more spacious feeling, although I couldn’t help wanting the thing to open, like a giant sunroof, which left me feeling like I had a convertible with a jammed top.

The starter Mondeo costs €28,845. However, Ford rightly decided that the readers of the <strong><em>Medical Independent</em></strong> deserved more than that, so the model I was handed — the ST-Line — was valued at €41,920, a substantial jump from the entry-level model and a little hop from the base ST-Line, which costs €37,195.

This bullet-proof, large saloon has won 37 awards, including 10 Car of the Year accolades, two of which were from BBC’s <em>Top Gear</em>.

It is the ultimate all-rounder for your family’s needs and should be at the top of your list if you’re shopping in this class.