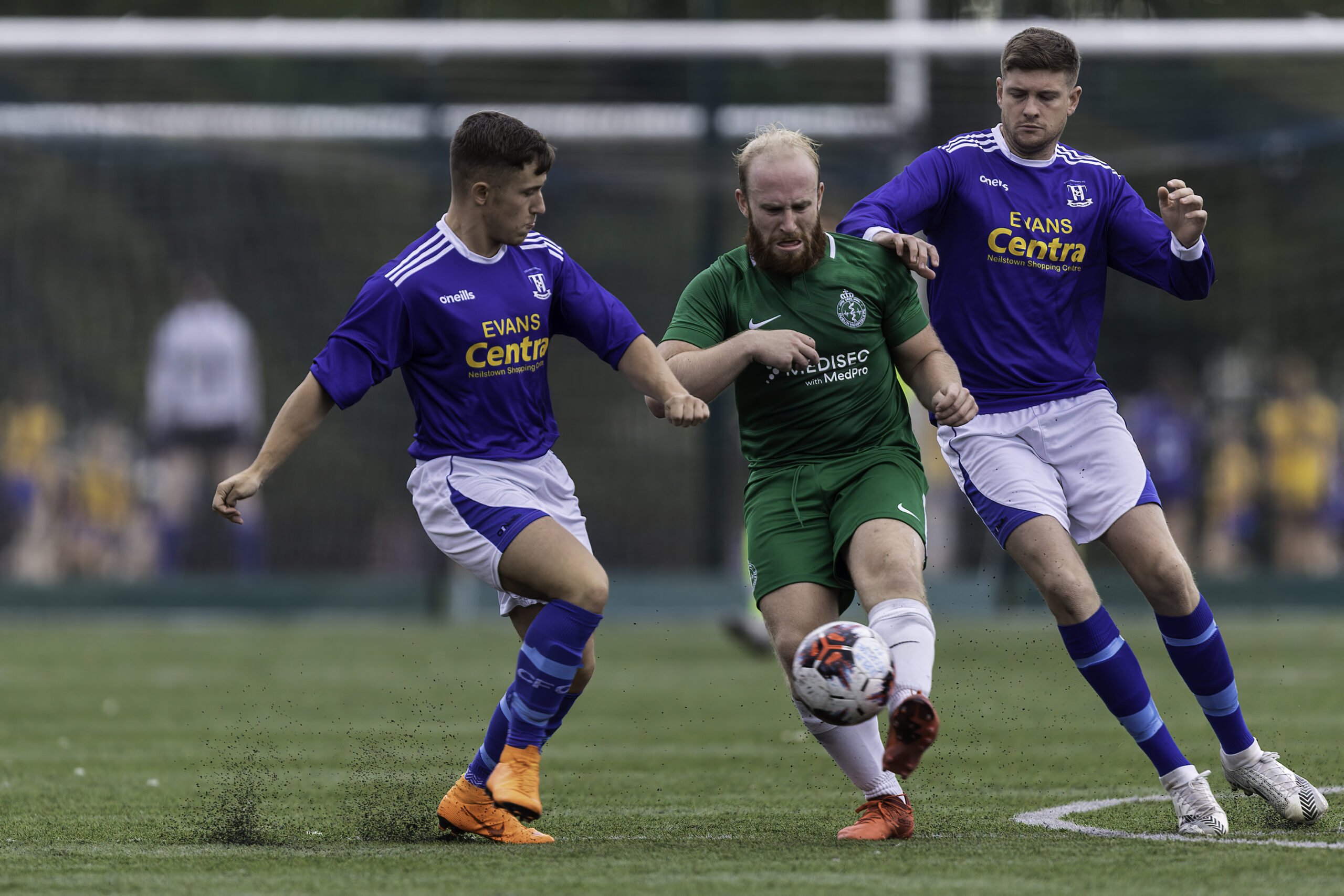 Dublin Hospitals FC (DHFC) progressed to the second round of the Leinster Football Association Jr Cup after surviving a late scare against a stubborn Collinstown at Pearse Park. Played in hot and humid conditions, the doctors tired late on and had to survive an onslaught from their plucky opponents to improve their record for the season to five wins, two draws and one defeat.

DHFC were dealt a blow prior to kick-off when midfielder Brian Gaffney fell victim to the hamstring epidemic that has afflicted the camp all season. But the doctors shuffled their pack and unearthed a few aces in the process.

They dominated the early exchanges, with the lively front trio of Fionn Nally, Cian Ward, and Dave Gildea posing a constant threat. Ward’s technical ability has been evident all season and he continued his rich vein of form in the first-half, giving his opposing rightback a torrid time, while ophthalmologist Gildea had a number of sights on goal, but was thwarted by Collinstown’s keeper on each occasion.

Comfortable in possession, the doctors bided their time and it wasn’t long before they made the all-important breakthrough midway through the first-half. Nally, ever-industrious on the right-flank, linked up with Gildea who teed up John Cosgrove to strike low and hard beyond the keeper for a deserved lead.

Cosgrove, a linchpin in the DHFC midfield, was wearing the captain’s armband on the occasion of his 100th appearance for the club. Rory Durand almost doubled the doctors’ lead soon after, but shot narrowly over the crossbar after some fine individual build-up play. His frustration with that miss was evident when he later picked up a needless yellow card.

Much of the build-up to the fixture was dominated by evergreen defender Colm Cosgrove, who hit the headlines in league action the previous week, after his cynical last-ditch tackle secured a nervy win against Drumcondra. Cosgrove, who refused to engage with any media all week, did his talking on the pitch. Calm in possession and aggressive in the tackle, he laid the foundations upon which this DHFC victory was built.

He was ably assisted by John O’Grady at left-back, centre-half partner Colm Kirby, and right-back Ciaran
‘Judgey’ Judge, who returned from a lengthy absence to deliver an assured performance.

The second-half continued in the same fashion as the first with DHFC dominating possession and creating chances at will. They doubled their lead after 55 minutes when a John Cosgrove corner caused confusion in the Collinstown box and Nally was on hand at the back post to poke home. The game became fractious thereafter, and a nasty late challenge on O’Grady saw Collinstown deservedly reduced to 10 men. Despite this setback, they grew into the game and their dominance paid off in the 75th minute.

The visitors’ number 13 posed a constant threat in the air, but he used his feet to damaging effect in the build-up to the goal, collecting the ball in midfield, evading a number of challenges before delivering an inch perfect cross for his strike partner to fire home.

Buoyed by that strike, Collinstown laid siege on DHFC’s goal, who had goalkeeper Paul Schütze to thank for a number of fine saves, which maintained their slender advantage. The doctors also had number six Dave Kennedy to thank for propelling them to victory.

Playing out of position in a defensive midfield role, Kennedy was energetic around the pitch, economical in possession and a constant thorn in the Collinstown side, as he snuffed out danger time after time. Deservedly, he was the unanimous choice for Man of the Match.

After a two-year absence, Gavin Kane returned to the fold for the final 15 minutes at right-back to make his 99th appearance for the club. Undoubtedly, reinforcements will be required as the physicians’ demanding fixture list has been compounded by recent cup success. A number of injuries to club stalwarts, such as Kieran Keane, Cillian ‘Granty’ Grant, and Ian Daly, have hampered preparations of late and the club’s brain trust will be eager to strengthen the squad as much as possible.

After a strong start to the season that sees DHFC sit one point off the top of the table with a game-in-hand, all eyes turn towards the FAI Junior Cup round one fixture, which will see DHFC travel to Corduff FC at a venue renowned for its caustic atmosphere and partisan home support. Things don’t get any easier the following week as they face another away-day in a mouth-watering topof-the-table clash with Skerries Town FC.

Subs: Gavin Kane PS: Dublin Hospitals FC would like to thank our wonderful sponsors Medisec Ireland, who have been integral to the redevelopment of our club. Go online to www.dublinhospitalsfc.com for all the latest DHFC news, records, results and other features. See also information about the Premier League Survivor 21/22.

John Cosgrove made his 100th league appearance for the club. The player-manager has been an outstanding servant over the years and, as has been the case on so many occasions, it was his left-footed strike that proved to be decisive on Saturday.