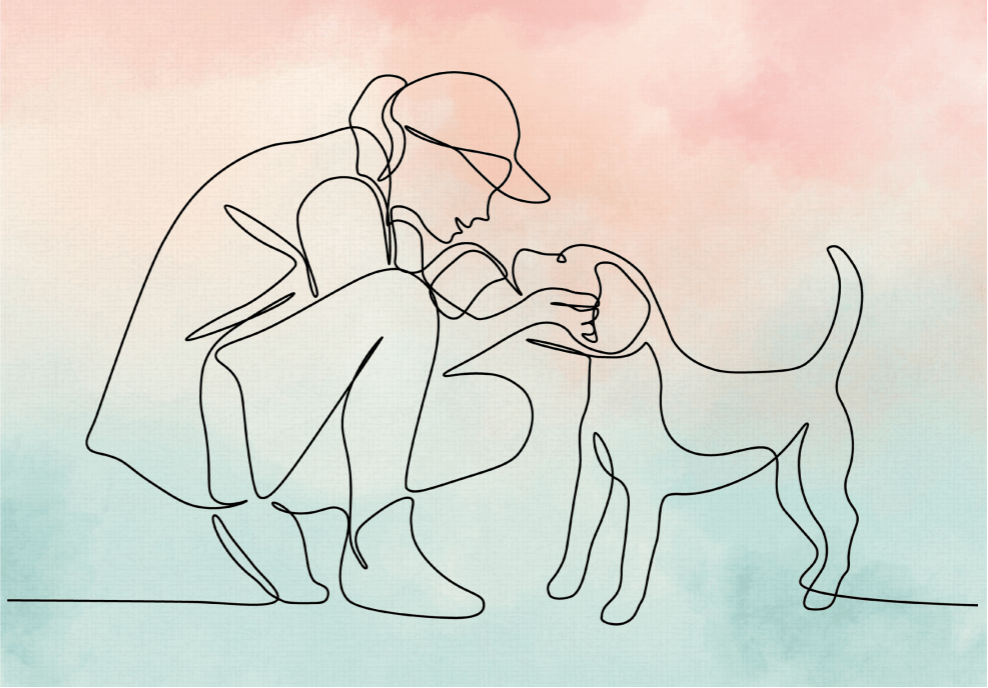 The strong bond that developed between Prof Gaye Cunnane and her new dog was a source of great surprise.

They say that owners begin to resemble their dogs after a period of time. Over the years while out walking around the streets of Dublin or elsewhere, I might take a moment to observe the connections between canine and human and, frequently, I would silently agree. There might be pointed features, or a dishevelled appearance, or (and this might be a reason to cross the road) an aggressive stance, with the leash acting as the real and metaphorical connection between the two.

So, when Charlie arrived, in a whirlwind of fluff and unpredictable bodily functions, into my ordered existence, I was sure that no-one would ever make such an analogy. Even the bond that I thought would be there from the beginning was questionable in the rude awakenings, typically at 3.25am, when insistent barking and whining would portend an unpleasant mess. At those times, when I would carry him into the garden to finish off what he had started, I would look up at the gloomy sky and ask myself how I had gotten into this situation and, more importantly, how I would get out of it again. In those dark moments, I would have happily handed him over to a stranger, along with the copious toys and comfy doggy blankets I had bought for him.

Even as a doctor, I had never seen so much pooh, especially in unpredictable places. One early morning, after a particularly dramatic night, I noticed lumps of it stuck to a kitchen cupboard and wondered if he’d actually fired them from his crate because I couldn’t think how they could otherwise have reached such far-flung locations.

But several hours later, he would greet me with delight, cuddling, licking, and sighing with contentment to have been reunited with his human, even if it wasn’t long since our previous, less happy, interaction.

It was easy to name Charlie, because he just looked like one. There were no long hours of debate over other choices. And the chance to give a precious, living creature his identity felt special. I loved holding his little body, feeling his heartbeat and his vulnerability, kissing the top of his soft, curly head and promising to give him the best life possible.

It soon became obvious that Charlie was well-named – he’s a cheeky fellow who gets himself into trouble despite his best intentions. He has a hard time recognising that not everyone will love him– not all humans take kindly to canine ways and some dogs like their personal space to the extent that they will snarl if it’s compromised, even by an enthusiastic panting puppy with a wagging tail. It took me a while as an adult to remember these lessons too and like Charlie, I have learned to hang back in new situations, to take it all in first, without landing myself in immediate trouble.

Charlie’s breed is uncertain and when his hair started to grow, he began to resemble a scruffy English sheepdog. He has bushy red/white eyebrows, circles of black hair around his eyes and a white muzzle with long whiskers. He arrived, as an eight-week old puppy, in April 2021, in the middle of a prolonged lockdown of our third pandemic wave, where all but essential businesses were shuttered, and grooming could only be done, legally, in a self-styled way. I had hoped for a small, quiet dog – and he is a rapidly growing, energetic fluffball.

One morning, just a few weeks after Charlie’s arrival, in an exhausted state of sleeplessness, I looked in the mirror to notice my overgrown shaggy locks in serious need of a trim, the dark circles under my eyes, not to mention the unkempt eyebrows, although thankfully no whiskers, and sighed at the irony. It turned out to be much easier for him to get a grooming appointment, but the price of a haircut for each us ended up the same.

Charlie had been with me for about a month when we both became ill – I got a fever, cough, and breathlessness, and Charlie developed vomiting and diarrhoea. At least we couldn’t blame each other for our symptoms. I went to the GP and brought Charlie to the vet. We both came home with antibiotics – I kept his on one side of the kitchen counter and I had mine on the other. He was on metronidazole, so even though, of course alcohol is out of the question for him – at least I wasn’t subject to the same restrictions.

I was careful not to mix the tablets up and became appreciative of my degree that allowed me to tackle the complexities of the medications (some involved syringes) with ease. We both remained febrile and lethargic for some weeks – my barking cough eventually resolved, but his bark, thankfully, became stronger with time,

I have a wonderful cousin whose intervention facilitated Charlie’s arrival in my life. She has an avid interest in genealogy and is always encouraging me to contribute my DNA to the family database. She bought me a kit for my birthday a few years ago that remains where I left it at the time. My heritage isn’t in question, so I didn’t see the point. However, Charlie’s parentage is the subject of conversation with random strangers almost every time I bring him for a walk. When I say I don’t know what type of dog he is, they start guessing – Cavalier, Bichon, Dalmatian, Terrier, with perhaps some Poodle characteristics. I saw him running the other day and he reminded me of a horse. He has very long legs and huge paws, so his ultimate size could be quite large. I had hoped for a small, quiet dog – and he is a rapidly growing, energetic fluff ball. I decided I’d like to know exactly what he is, in order to estimate future size and to be prepared for possible illnesses, so, to my cousin’s surprise, I bought a DNA kit for him. Like the antibiotics, I kept it separate from my own –how ironic it would be to mix them up – Gaye Canine and Charlie Cunnane:
Results awaited.