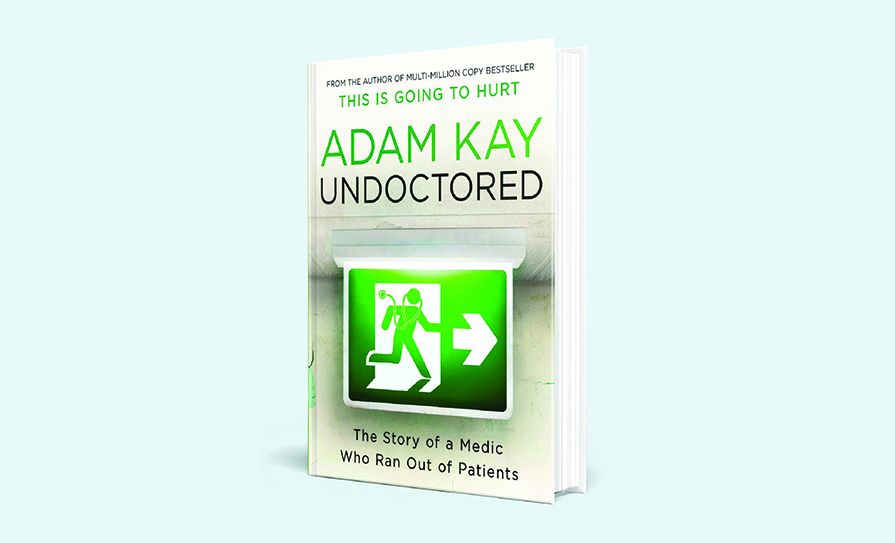 Title: Undoctored: The story of a medic who ran out of patients

Adam Kay is a funny writer who, like all good comics, leaves the reader with not only a smile and sense of awe, but also the impression that he has said something profound. This has led to enormous success, especially with his first book, This is Going to Hurt, and now, Undoctored: The story of a medic who ran out of patients, which is both a prequel and sequel to the earlier bestseller. I’m guessing that Undoctored will sell millions of copies even in the time it takes me to write this review.

But notwithstanding his success, has Kay actually said anything profound that we did not know already? Too often, I have sat in venues listening to stand-up comedians and thought that their insights were not only witty, but wise, only to realise later that apparent pearls were platitudes. Laugher is involuntary agreement. Reflection is the cure. Not everything that makes us laugh deserves attention. Sometimes, comics are amusing, but wrong.

When This is Going to Hurt was published I read it, went to see Kay at the National Concert Hall in Dublin, and got him to sign my book. He was patient, kind, and funny. Irritatingly, he was also quite wise and, I think, profound. As a result, even if we set aside his phenomenal gift for humour, there is still plenty going on in his writings that deserves our attention, not least in this new book, as well as his other publications.

Above all else, Undoctored further underlines one of Kay’s key messages from This is Going to Hurt and (even more so) the TV series based on that book; ie, that the ‘training’ of ‘junior’ doctors is often more akin to a survival challenge than true education. While medicine has always demanded dedication, too often this has translated into a tradition of overwork, a sense of responsibility for dysfunctional systems, and excessively long shifts in hospitals. Kay makes this point vividly in the new book and demonstrates the effect this system can have on trainees.

Like many readers, I worked as an NCHD in training posts for many years after graduating as a doctor. Hours were long: For a weekend ‘on call’, the NCHD would enter the hospital at 8am or 9am on Friday morning and remain at work in the hospital continuously until 6 pm on Monday evening. On a quiet weekend, the NCHD might get some sleep. On a busy weekend, there might be no sleep at all. It was incredibly difficult and, from lunchtime Saturday until Monday morning, unpaid.

After staggering home on Monday evening, the NCHD was back at work at 8am or 9am on Tuesday, and each day thereafter. There was no time off following nights or weekends ‘on-call’. Rosters were often ‘one-in-three’ or ‘one-in-four’, meaning that the NCHD was ‘on-call’ in the hospital every third or fourth night, and every third or fourth weekend, in addition to working five days a week. Thinking back, it was clearly ludicrous, deeply inhumane, and probably dangerous. It is a miracle that anyone survived, let alone remained in medicine. But, oddly, we did.

Today, the European Working Time Directive has made certain improvements and given NCHDs a day off after a night on-call. Even so, NCHDs are still expected to work lengthy shifts that exceed safe limits. This issue became even more apparent during Covid-19. When the stresses of the pandemic were added in, the position of NCHDs and many other doctors around the world became untenable. As we saw, many struggled deeply. Most found a way to cope, but some, tragically, did not.

The absence of compassion in our treatment of NCHDs is particularly distressing at a time when solidarity remains central to efforts to address the Covid-19 pandemic and hold our societies together. Hopefully, appreciation of healthcare staff will be one legacy of this dreadful pandemic, recognising the sacrifices made by so many during the white heat of the outbreak, when we relied on the steadiness of GPs, nurses, hospital doctors, testing centre staff, and many others to provide a bulwark against infection, illness, anxiety, and despair.

Kay has done medicine a real service by highlighting the pressures that hospital systems can place on doctors, and showing how excellent clinicians, such as Kay himself, can be squeezed out of the system. His witty, valuable new book is described on its back cover as “an astonishing portrait of a life in and out of medicine, from one of Britain’s finest storytellers”. This is true, but the publishing industry’s gain is medicine’s loss: We need people like Adam Kay to stay in medicine both to change the system and to keep us human.

In 1907, William Osler, perhaps the greatest medical educator in history, wrote that “whatever you do, take neither yourselves nor your fellow-creatures too seriously. There is tragedy enough in our daily routine, but there is room too for a keen sense of the absurdities and incongruities of life, and in the shifting panorama no one sees better than the doctor the perennial sameness of men’s ways.”

Osler was right, and, in order to better appreciate these dimensions of clinical practice, we need to entice Adam Kay back into medicine as soon as possible. On the basis of his books, this won’t be easy, but Kay’s sense of vocation is still apparent in everything he writes, so I think we have something quite powerful and profound to work with.

Prof Brendan Kelly is Professor of Psychiatry at Trinity College Dublin and author of In Search of Madness: A Psychiatrist’s Travels Through the History of Mental Illness (Gill Books).