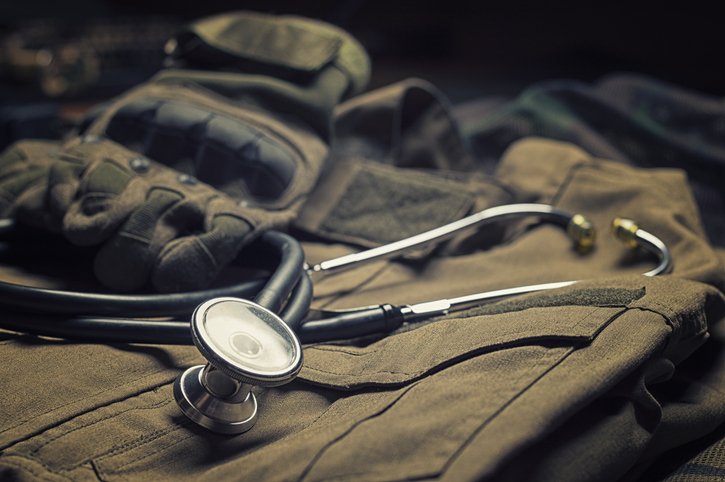 Stethoscope lies on the uniform of a US soldier. The concept of health care, military insurance, state care. Top view. Mixed media

Currently, it is a busy time in aerospace. The US National Aeronautics and Space Administration (NASA), along with their international partners, are projecting a return to the moon for 2026. The European Space Agency (ESA) is recruiting for astronauts this year for the first time since 2008. Internationally crewed ‘exploration class’ missions are now being planned to Mars that will involve months or years in space. Companies like SpaceX and Virgin Galactic will be sending commercial crews and paying passengers into orbit with increasing frequency by the end of the decade. Doctors trained in aerospace medicine are required to provide medical care for these crews.

Aerospace medicine is a branch of occupational medicine that deals with the health and performance of personnel who fly in air and space vehicles. There are unique challenges associated with medical care provision for space flight. There are significant physiological changes that occur in the human body as it adapts to the microgravity environment. As our species travels further from Earth, the prospect of medical evacuation in an emergency diminishes and the potential hazards encountered multiply.

For the multi-year Mars missions currently being planned, there will be no possibility to return to Earth for definitive treatment and medical emergencies will have to be managed by the astronaut crew themselves. Aerospace physicians need to be cognisant of the hazards their patients will encounter during flight and ensure that they remain physically and mentally fit for the task.

There are two distinct strands to aerospace medicine – operational and research. There are operational flight surgeons who have primary responsibility for the specific astronauts involved in space flight missions. Separately, there are a variety of clinical and non-clinical research avenues involving aerospace medicine trained physicians.

Astronaut health screening and fitness optimisation pre-flight is overseen by operational flight surgeons. They may also be responsible for training the non-medical crew in the basics of emergency medical care. Flight surgeons monitor all aspects of the crew’s health before, during and after flight. While some astronaut crews will have a trained doctor deployed with the mission, more frequently they will have a crew medical officer – an engineer or scientist who has been trained in basic emergency care and specific procedures. During space flight, these medical officers are supported by medical checklists for common conditions and can avail of telemedicine support provided by ground-based flight surgeons.

Human adaptations to the microgravity environment can cause problematic symptoms for astronaut crews that may need to be treated during flight. Microgravity has significant effects on the body’s structures and physiology. Bone loss and muscle atrophy are some of the most documented effects of microgravity and there is also an increased risk of nephrolithiasis due to the increased Ca+ from bone turnover. Fluid shifts from the lower body to the head and chest leading to puffiness around the face and neuro-ocular effects (often leading to papilledema).

There are changes in taste, metabolism, and increased secretion of stress hormones, such as cortisol. The effects of weightlessness can also lead to nausea and astronauts tend to take anti-emetics to mitigate against this. Vomit in zero-G, unfortunately, does not go downwards towards the floor, but rather floats outwards with the force it was propelled with.

For some of the known side-effects of space flight, effective countermeasures have been developed in order to minimise these effects on the body. As bone and muscle loss are recognised complications of weightlessness, countermeasures have been put in place to mitigate against them. Each crew member on the ISS must spend two hours a day exercising using the on-board exercise equipment. This gym equipment is specially designed to simulate the effects of gravity through harnesses and vacuum cylinders. However, even with such a rigorous exercise regimen, without the effects of gravity on their bones, astronauts lose approximately one per cent of their bone density per month while living in space.

A key area of space flight research is focused on technology-based countermeasures to the effects of microgravity on the human body. Bedrest studies have frequently been used to simulate the reduced use of the body’s muscles that astronauts go through in space. They allow examination of the reduction in muscle mass over time. During the NASA/ESA bedrest studies, participants had to remain in bed for 89 days, with the head tilted six degrees below the horizontal in order to simulate the effects on the body of weightlessness.

In the German Aerospace Centre (DLR), a short-arm centrifuge (pictured) is utilised during bedrest studies to assess the potential impact of artificial gravity during space flight. The centrifuge in the experiment places the body under increased G-force to determine whether this has a positive impact on reducing this loss of muscle mass in an inactive patient.

A major area of research interest at present in aerospace medicine is that of the effects of cosmic radiation. Background radiation outside of Earth’s protection can have devastating effects on organic tissue at high doses. Coupled with the radiation effects of solar flares, which are currently difficult to predict with accuracy, these are significant risks to the health of future astronauts. Radiation is a significant limiting factor in humans spending prolonged periods outside of low Earth orbit.

There are also many analogue environment studies run annually, attached both to governmental space agencies as well as university research departments and citizen science projects. These projects frequently place teams in isolation and give them similar tasks/schedules as astronauts would undertake during space flight missions where they can examine human factors and psychology in environments where there is real risk. Two active citizen science organisations that conduct citizen science analogue studies and accept volunteers from healthcare are Project PoSSUM (Polar Suborbital Science in the Upper Mesosphere) and the Austrian Space Forum (OeWF).

Antarctica presents in many ways an ideal analogue for space flight. A remote and austere environment, there are inherent risks to working in Antarctica. During the Antarctic winter, evacuation for medical reasons is not possible so the crew must be self-reliant. The ESA has a doctor based at the Concordia Research Station on the Antarctic Plateau, there undertaking research on the effects of isolation on a small crew in an inhospitable environment. The lessons learned here have applicability in space.

Space exploration has directly benefited medicine outside of the narrow field of aerospace medicine itself. The enormous cost of sending equipment into orbit has accelerated the miniaturisation and innovation in medical instrumentation. Some examples of medical technology that have been developed or improved from space flight research are MRI imaging, LASIK eye surgery, the left ventricular assist device (LVAD), ear thermometers, and automatic insulin pumps. It has also accelerated the development of telemedicine tools that have translated into terrestrial healthcare.

Historically, most aerospace medicine training programmes have been based in the US, where NASA recruits regularly for new classes of astronauts who then require medical support. In the UK, which had its second astronaut, Tim Peake, fly to the ISS with the ESA in recent years, the specialty of Aviation and Space Medicine was recognised in 2016. It now has a specialty training programme recognised by the UK General Medical Council. Although Ireland has not yet had an astronaut, a group of Irish doctors are currently conducting space flight-related research through Space Medicine Ireland (www.spacemedireland.com). They also provide an annual aerospace medicine bursary for medical students interested in learning more about the field.

ESA is not currently recruiting for flight surgeons, but they have just opened their astronaut recruitment process for the first time in 11 years. When applications were last open in 2008, more than 10,000 people applied for a handful of places. ESA are anticipating more applications this time for approximately four training places. Applications are open to doctors who have completed their specialty training in general practice or in another specialty.

It is required that applicants are fluent in English and are proficient in at least one other language. Candidates should be physically fit and free from chronic illness. As part of the initial application, candidates must provide a medical certificate for a Class 2 Aviation Medical.

ESA are aiming to recruit approximately four full-time astronauts as well as up to 20 reserve astronauts. These reservists will be selected in the same way, but will continue to hold their current posts until they are selected for a specific task or mission. ESA is also trialing a new ‘parastronaut’ programme, whereby individuals who meet all of the requirements to become an astronaut, but suffer from a physical disability will be considered. This is a feasibility project for ESA to determine what innovations or adaptations can be put in place in order to facilitate space flight for these individuals.

Applications opened on 31 March 2021 and the final deadline for applications is 28 May. Be prepared for a very long assessment process as there will be several rounds of interviews, medical, psychological, and skills testing before the final candidates are selected, likely by autumn 2022. Those selected can expect a busy training schedule, with training blocks taking place at the European Astronaut Centre, Cologne, as well as in Houston, US and Star City, Russia.

If you are thinking about becoming Ireland’s first astronaut, you can find out more at: www.esa.int/About_Us/Careers_at_ESA/ESA_Astronaut_Selection