Listening to the needs of the deaf population 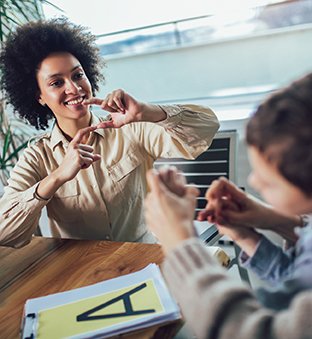 On 24 December 2017, Ireland’s 5,000-strong deaf community received long-overdue justice and equality, when President Michael D Higgins signed into law the Irish Sign Language Act. At last, after centuries of social exclusion, discrimination and oppression, Ireland’s deaf citizens can see their language have equal status with Gaelic and English. Deaf people now have the right of access to all public services. In addition, on 7 March 2018, some 11 years after signing-up to the United Nations Convention on the Rights of Persons with Disabilities (UNCRPD), the Irish Government became the last European country to ratify it. The UNCRPD enshrines the rights of all disabled people, including those who are deaf, to non-discrimination, autonomy, inclusion, equality and accessibility. It supports the learning of sign language, promoting the linguistic identity of the deaf community, and the right to health without discrimination.

Doctors are vital frontline professionals in the implementation of this legislation. They are well aware of the one-in-six people who have some acquired hearing loss (rising to one-in-two of the elderly population), but they may be less familiar with people who are profoundly deaf from birth or early life, who comprise one in a thousand of the population. More than 90 per cent of the deaf population are born into hearing families. The causes of their deafness are half-genetic and half non-genetic. There are more than 80 genes for deafness, mostly recessive. Most genes cause deafness alone, but others are associated with physical, neurological and/or visual problems. For example, Usher syndrome is a recessive gene which causes early, profound deafness and progressive visual field loss due to retinitis pigmentosa. Non-genetic causes of early profound deafness include maternal rubella and cytomegalovirus, birth anoxia, prematurity, neonatal jaundice, and infections such as meningitis.

Deaf families who have dominant genetic deafness are the core of the deaf community. Deaf children in these families have age-appropriate language development in ‘sign’. Deaf children born into hearing families are at risk of language delay if their deafness is not recognised early, and/or they do not have full access to a language. The choices their hearing families make are vital, but contradictory advice and the controversies in education have resulted in many difficulties and delays. The national sign languages of the world are natural, full languages, with the same grammatical structures as spoken and written languages, and are processed in the same areas of the brain.

There was an initial flowering of deaf education in sign worldwide in the 19th Century, which included the establishment of deaf schools in Dublin. The Claremont School was founded in 1816, which gave children a Protestant education in British sign language. St Mary’s school for girls and St Joseph’s school for boys were then established, using expertise from schools in Paris. In this way, French sign language became a component in the development of Irish Sign Language. However, in 1880, there was a conference in Milan organised by teachers advocating the strictly oralist (speech/lip-reading method) approach to the education of deaf children. This eventually spread to Ireland, and oralism was imposed in deaf schools in the 1940s and ’50s, becoming State policy in 1972. Elsewhere, the strictly oral method, which forbade and punished the use of sign, even for deaf children from signing deaf families, was becoming increasing discredited. Modern policies in Ireland built on the early detection of deafness by neonatal screening, and recognise the importance of age-appropriate language development using Irish sign language in a bilingual approach, whether or not cochlear implantation is appropriate.

Deaf people, therefore, may have fluent use of sign language and have had full access to literacy and education, or, because of deprivations in early life, may have significant difficulties in these areas. The cause of deafness may raise medical concerns, but in addition, even common health problems may be missed or be poorly managed due to communication barriers. Problems in making appointments, being called into the consulting room, lack of interpreting and/or poor literacy; all these can put the health of deaf people at risk. Misunderstandings about medication and difficulties in obtaining prescriptions can cause serious problems. Often, the deaf person has no way of contacting help in an emergency or out-of-hours.

Deaf people have an increased prevalence of mental health problems for three main reasons. There may be an increased neurological risk from some causes of deafness, particularly the non-genetic causes. There are excess risk factors which deaf children may be exposed to, including bullying, abuse, isolation, and the emotional, social educational and psychological problems associated with language delay.

The third key factor is the prolonged duration of mental health problems for deaf people due to significant delays in the recognition and treatment of even serious illnesses like schizophrenia. At present in Ireland, there are no specialist mental health and deafness (MHD) services for children and adolescence. From 2005 to 2018, there was a liaison mental health and deafness service hosted by Chime. At the beginning of 2019, the HSE commissioned a full adult multidisciplinary MHD service based in CHO 9, but it is not yet started.

In 2019, an online survey of 173 doctors from different specialties, mainly psychiatrists and GPs, demonstrated that more than 90 per cent had not heard of the Irish Sign Language Act 2017.

Over 50 per cent felt they were not confident with deaf patients, who were therefore receiving less-than-optimal service. Eighty-six per cent of responders would like further training. Even simple steps like asking deaf people about their communication needs and preferences can make an important difference. Relatives should not be used as ‘interpreters’, except in emergency situations. Relatives often do not have fluent sign, and confidentiality is seriously compromised.

Deaf awareness training provides information and interactive experience about communication and language options. Deaf organisations such as Chime, the Cork Deaf Association and the Irish Deaf Society all give information and advice.

Frontline medical staff have a key role in the implementation of the UNCRPD and the Irish Sign Language Act. These represent a social, linguistic and cultural view of difference, rather than a medical view of disability.

However, deaf people may have physical and mental health needs in addition to those of the general population, yet their access to services has been restricted. The legal basis for equality is now established, and both doctors and patients can now use the law to create fair and just services.