Learning from the Great Flu 100 years on 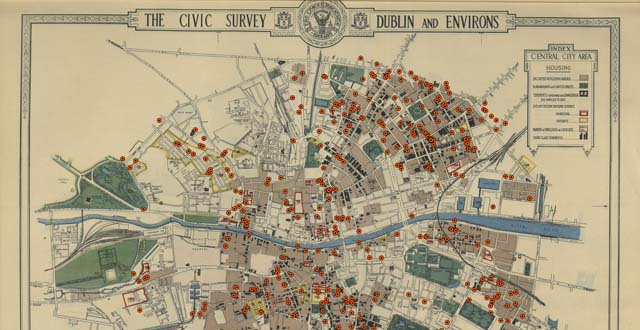 The occurrence of the Great Flu (also known as the ‘Spanish Flu’) 1918-1919 provides a wonderful opportunity for scientists, medics and historians to engage with each other in discussion and debate on the details of the pandemic that took the lives of between 20,000-to-40,000 Irish people.

A conference and exhibition titled ‘Pandemic: Ireland and the Great Flu 1918-1919’ was launched at Glasnevin Cemetery on 23 October, showcasing how an interdisciplinary approach to this epidemiological event can result in a very fruitful exchange.

As well as Irish experts on the subject, the conference brought together international experts from Norway and South Africa. Experts included historical demographers, oral historians, mapping experts and medical historians, who demonstrated the depth and breadth of historical methodologies that can be applied to this global medical event.

Research conducted by historians at the School of History and Humanities in Trinity College Dublin, Glasnevin Cemetery and influenza historian Dr Ida Milne (PhD), Carlow College, sheds new light on the flu pandemic in Ireland in 1918 and 1919. The research explains the impact and legacy of the outbreak from a uniquely Irish perspective. The accompanying exhibition (that runs at Glasnevin Cemetery until April 2019) examines the global, national and local impact of the world’s deadliest pandemic and includes exclusive new maps illustrating the impact and movement of the deadly flu virus.

The project emerged out of an innovative collaboration that exists between the School of Histories and Humanities at TCD and Glasnevin Cemetery Museum. The aim of this collaboration is to support Glasnevin Museum in communicating its history, and that of the 1.5 million individuals buried therein, to a wider audience.

While the Irish Revolution and the First World War (WW1) have dominated recent public engagement with Irish history generally, and Glasnevin Cemetery in particular, over one million burials at the north Dublin site mean that the research possibilities are endless. Since the mid-1870s, cause of death has been a key piece of data recorded in the Glasnevin Archive, therefore the possibilities for medical history research are obvious. And thus was born a public history project on the Great Flu (1918-19).

Numbers are key to this study. The official mortality figure from influenza in 1918 and 1919 for Ireland is 20,057, but that does not include secondary infections or illnesses such as pneumonia or bronchitis. Dr Milne has estimated that approximately 800,000 Irish people fell ill with the flu during those years. Globally, the mortality figure is thought to be between 50-to- 100 million. Approximately 5 per cent of the world’s population died, a much higher figure than the numbers killed by military action during WW1 (approximately 17 million).

Links to the First World War

And one of the most thought-provoking papers at the aforementioned conference came from Prof Howard Philips (PhD) of the University of Cape Town, who spoke about the links between WW1 and the pandemic. The war ensured that global traffic had increased, meaning that crowded troop transport and accommodation (ships, trains and trenches) were breeding grounds for the virus. Being invalided at home or going on leave meant that the civilian population was also exposed.

But in a military situation, how impactful was morbidity? Prof Philips estimates that 17 per cent of the German Army were infected with influenza by July 1918. This was a key moment in the conflict, when the Germans were launching their last great offensive on the Western Front. What impact influenza had, if any, on the outcome of the war is difficult to know at this distance in time; nevertheless, the health of the armed forces must be taken into consideration.

The pandemic in Ireland

But what of the local picture in Ireland? Using statistics from the Registrar of Births, Deaths and Marriages, the researchers mapped the 20,057 influenza deaths that were certified in 1918 and 1919.

The collection of mortality statistics (begun in 1864) was hugely significant from a public health perspective, providing the State and health authorities with information on causes of deaths which could be analysed according to age, gender and geography. Deaths were registered locally at superintendent registrar districts, which were co-terminous with the poor law unions created in the 1840s. These figures enabled the researchers to go beyond county-level analysis; the maps suggest that influenza entered the country at the same points as the majority of human traffic — along the eastern and northern seaboard. The movement of people spread the disease, which eventually reached less-populated areas. As such, it was not until the third and final wave in 1919 that people in Galway, Mayo and Kerry felt its full force. By overlaying the contemporary railway networks and the densely-populated British Army Regimental Headquarters on these maps, the team was able to illustrate the possible links between army personnel, the railway and the spread of the disease.

These maps offer visual evidence of a regional experience that was fleshed-out by two of the presenters, which looked at Inishowen and Connemara as focused case studies. The high rate of mortality in Inishowen in Donegal can be explained by four factors, according to Dr Patricia Marsh (PhD) from Queen’s University Belfast. These factors were: The presence of the military at Lough Swilly and the various army camps in the area; the rail network; seasonal migration between Donegal and Scotland; and the return of bodies, accompanied by fellow influenza sufferers, from Scotland for waking and burial in Inishowen.

Galway presented a different picture, however, and deviations from normal burial practices during the pandemic are embedded in the folk memory in Connemara, according to Dr Jackie Uí Chíonna (PhD) from NUI Galway. Burial had become an issue because fear of infection meant that the neighbours refused to help each other in waking and burying their dead. Dr Uí Chíonna told the story of one woman who lay dead for seven days before the sanitary authorities, aided by the local constabulary, took her body away and buried her in the workhouse cemetery.

The western experience is also marked by a sense that region had been abandoned by medical and welfare authorities at the height of the crisis. Mortality was high among healthcare workers, which partly explains why doctors refused to take work in the area. Dr Uí Chíonna noted that the “fabulous fee of 15 guineas” was not enough to entice doctors to the west of Ireland.

For the east of the country, archives at Glasnevin Cemetery reveal that burials doubled, with an average of 24 bodies interred daily at the height of the pandemic in October 2018 during the second wave.

For the museum today, however, it is not that easy to present a picture of influenza and its impact on the cemetery. The Historian-in-Residence of the Glasnevin Trust Mr Conor Dodd noted that material culture relating to the pandemic is largely absent from national museum collections. This is a product both of what has survived and the collection policy of cultural institutions. Historians have only turned towards the flu in the last 15 years and the heritage sector is only reconsidering its collections in light of this new historiographical focus.

One of the key themes that emerged from the conference was the relationship between science and culture, between the virus and the host population. And that population was different in different locations, so an army on the march was different to the civilian population suffering from malnutrition and war-time deficiencies. As a result, the impact of the virus varied significantly.

Viral archaeologists have been able to recreate the genetic structure of the influenza genome and, in doing so, have suggested that the H1N1 virus of 1918 possibly emerged first in 1907, and that influenza outbreaks in 1914-16 may have led to immunity among certain populations. The concept, posited by immunologist Dr Anne Moore (PhD) of University College Cork, that vaccination and earlier infection acted as “education for the immune system” means that we have to look once again at who died and who survived in order to build a more nuanced picture of the social-economic and biological conditions in which the disease took hold. For an historian, this idea is fascinating and suggests we need to reconsider the role of biology in human society.

Historians have tended to focus on the socio-economic factors that led to high mortality in certain areas and among certain populations. But the emergence of viral archaeological evidence means that we can no longer ignore the role of immunity. Therefore, a fusion of biological and sociological contexts is key to understanding the progression of the pandemic in 1918 and 1919.

But how is this historical case study relevant today? Demographer Mr Svenn-Erik Mamelund from Oslo Metropolitan University argues that in terms of pandemic preparedness, historians offer a key insight. Socio-economic factors played a prominent role in who died from the pandemic, and a map of Dublin city echoes a global pattern, that highest mortality existed for those in lower socio-economic groups and crowded housing situations. Therefore, a “socially unjust burden” is evident in the 1918-19 pandemic. He proposes that in pandemic preparedness plans, vaccinations should be targeted based on both social and biomedical conditions so there is a greater chance of reducing the inequalities that lead to higher mortality in poorer regions and populations.

The interdisciplinary approach of the conference ensured that immunologists, historians and demographers came together to examine where their disciplines converge, and understanding the host population, the cultural, socio-economic and political context of the day was equally important for both professions.

The Great Flu has been largely ignored until recently, but it was a key event in the transformations taking place globally at the end of WW1. The evidence from Ireland on the eve of independence demonstrates that we cannot ignore these global events when looking at this key moment in national history. And equally significant are the lessons learned from the past, and the role that these can have in transforming current approaches to the threat from pandemics.