Drawing upon the creative impulse 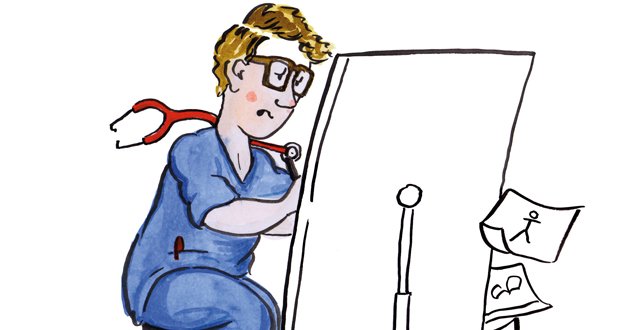 r Frank H Netter was a world famous medical illustrator. Dubbed ‘the medical Michelangelo’ by the <em>New York Times</em>, he used his artistic skill and applied that to further his studies in medicine. Dr Netter struggled to balance his illustrative work and his dedication to his medical practice. He always said illustration was his first love and while he felt a career in medicine was not for him, he felt  pressurised into finding a more stable way to make a living. Unlike Dr Netter, Dr Eoin Kelleher has no regrets about becoming a doctor. However, like Dr Netter, Dr Kelleher has a deep passion for illustration.

Dr  Kelleher has been drawing cartoons since third-year of secondary school. He once considered becoming a professional illustrator only to have realised the  harsh reality of how hard it is to make a living from drawing alone.

“To be a full-time illustrator you’d have to earn enough money to be able to live on. There are two reasons why – it’s actually very difficult to make a living from the arts and there isn’t really much of a demand. The other side of it is that I could give up illustrating and it wouldn’t have a massive impact on my day-to-day life, as in I don’t make enough from it to actually have to depend on it.”

Dr Kelleher once reached out to <em>The Irish Times</em> cartoonist, Martyn Turner, about his wish to pursue this dream to be a professional illustrator, only to be met with a swift reply advising him to get a day job. Dr Kelleher took the constructive advice on board and knew that a path in illustration was not really a career that can sustain most people.

He received his medical degree at the RCSI in 2014, but all through medical school he pursued his hobby. Although it is an extremely demanding profession, medicine provided Dr Kelleher with the financial security to realise his creative ambition.

“Whereas, if I had to do it because it was how I earned a living, then it might go from something I enjoy doing to something I’d have to do. There is less pressure on me to do cartoons. I draw because I want to do them. I focus on ideas that are important to me and I work with people that I want to work for. I don’t feel obligated to have to do something to just earn money. And, I do actually like my day job. In saying that, it would be nice to draw cartoons all day,” Dr Kelleher explains.

Throughout medical school Dr Kelleher sent out his cartoons to newspapers and magazines across Ireland in the hope of being recognised. The first place to acknowledge his work was <em>The Phoenix</em>. Although his cartoons were being constantly published, the demands of medical school meant  he had to put his illustrative ambitions on hold for a period.

“I had to cut down on what I did. I used to take a lot of art classes and I basically had to stop all that because of two things – time and space. Not like a studio, but a room in your house where all your paints are, which is hard when you’re moving around the country because you’re constantly starting a new job and don’t have enough free time. I think if you try and do one thing and do it well it’s probably more satisfying than doing something half-heartedly. That’s the main reason why it was so hard but for the moment, I’m happy doing cartoons. I do enough cartoons to keep me happy.

“Originally I worked for the <em>Irish Medical News,</em> but had to stop because my intern year at Beaumont Hospital was incredibly busy. At the end of my intern year, when things seemed to die down, I approached the <strong><em>Medical Independent</em></strong> (<strong><em>MI</em></strong>) and asked if they’d be interested in working with me and fortunately for me they were and here we are almost four years later,” he says.

Over the past four years Dr Kelleher has illustrated satirical cartoons for <strong><em>MI</em></strong>. The subjects he has tackled have ranged from detailing what a life in medicine is like on the frontline, to the repercussions of governmental and mangerial actions for both patients and staff, to the issue of emigration among NCHDs. His ideas are fuelled from years of working in the medical system. Dr Kelleher currently works in Beaumont Hospital as a trainee anaesthetist and describes his cartoons as a way to examine current topical issues that impact his work.

“I take a lot of my frustrations out in my cartoons. I am careful though not to draw something that directly relates to any person, or place that I’ve worked, because I don’t think that’s fair. My illustrations are related to things in general as opposed to any one or two people in particular, except for political figures. They invite it upon themselves, it’s part of the job [and] from being in the public eye. But, I like doing drawings for their own sake, not just satirical, but unfortunately I don’t have enough time to do them.”

<strong><em>MI</em></strong> asks Dr Kelleher about where he gets his ideas and who he is inspired by.

“They always just crop up. I could see something written down and think of a great illustration that would match it. Ideas just come to you.  Most of my ideas come from just sitting down at the drawing board and writing out all the current issues in politics and healthcare and trying to think of ways to make them funny,” he replies.

Dr Kelleher takes inspiration for his illustrations from an era he calls the ‘golden age’ of cartoons. The themes and ideas that have been in cartoons published in the British papers during the 1940s and 50s are a constant source of influence.

American poet, T S Eliot, once said that “immature poets imitate and great poets steal”. The knack lies in learning how to steal like an artist when it comes to what you take inspiration from and what you create.

“A lot of it is inspired by other people’s work. If you look at political cartoons, in general, say over the past 100 years, there seems to be recurring themes. Some of my cartoons are copies, but copy isn’t the right word because that makes it sound less credible. There’s a lot of famous political cartoons. So some of the cartoons I do are influenced by that and are a tribute to them more than anything else and made as a nod to cartoonists who are far better than I am. These  being David Low who worked for <em>The Guardian</em> and Victor ‘Vicky’ Weisz, who was a Hungarian cartoonist that worked for the <em>Daily Mirror</em> in the 1940s and 50s. Then there’s the famous current [cartoonists] – Martyn Turner and Gerald Scarfe, who is retired now. If you look back at a lot of themes that are always popping up, I draw inspiration from them.”

His love for medicine and cartoons has presented great opportunities for him over the years including illustrating a colouring book. <em>Journey through the Brain</em> was developed with Prof David Cotter, Prof Mary Cannon and Dr Lorna Lopez, researchers from the Department of Psychiatry in the RCSI, to bring their research to a wider audience, in particular children. Dr Kelleher was delighted to contribute.

“We sat down and talked about the most important things we wanted to cover. The reason why they asked me is because I had done illustrations like this before around neuroanatomy. I illustrated the cranial nerve and that was actually a drawing that was later adapted for the book.

“We looked at all the important topics, they obviously knew which ones are important enough to cover due to the fact that it is their area of expertise. We looked at the general anatomy of the brain and what they do. So ‘synapse’, which is how nerves talk to each other, and things like neurotransmitters and different functions for the brain. The left side versus the right [side of the brain]. Then we thought of how we would represent them and I went away and tried to draw them.”

According to Dr Kelleher, drawing also helps him overcome the stress of a medical career and the pressures that come with such a busy working atmosphere. Although he also finds exercise and practising mindfulness useful, he says that keeping his mind healthy for a strenuous job is important and for this, he credits drawing.

“Your day-to-day stress is a lot higher and particularly if your job is very busy. The hardest transition, from medical school to the hospital, is in terms of stress,” he comments.

<p class=”captionMIstyles”>“Drawing cartoons helps. I think it’s very important to have a hobby separate from work that you can do in your own space. That’s probably the main thing that really helps.”