Being President during a pandemic 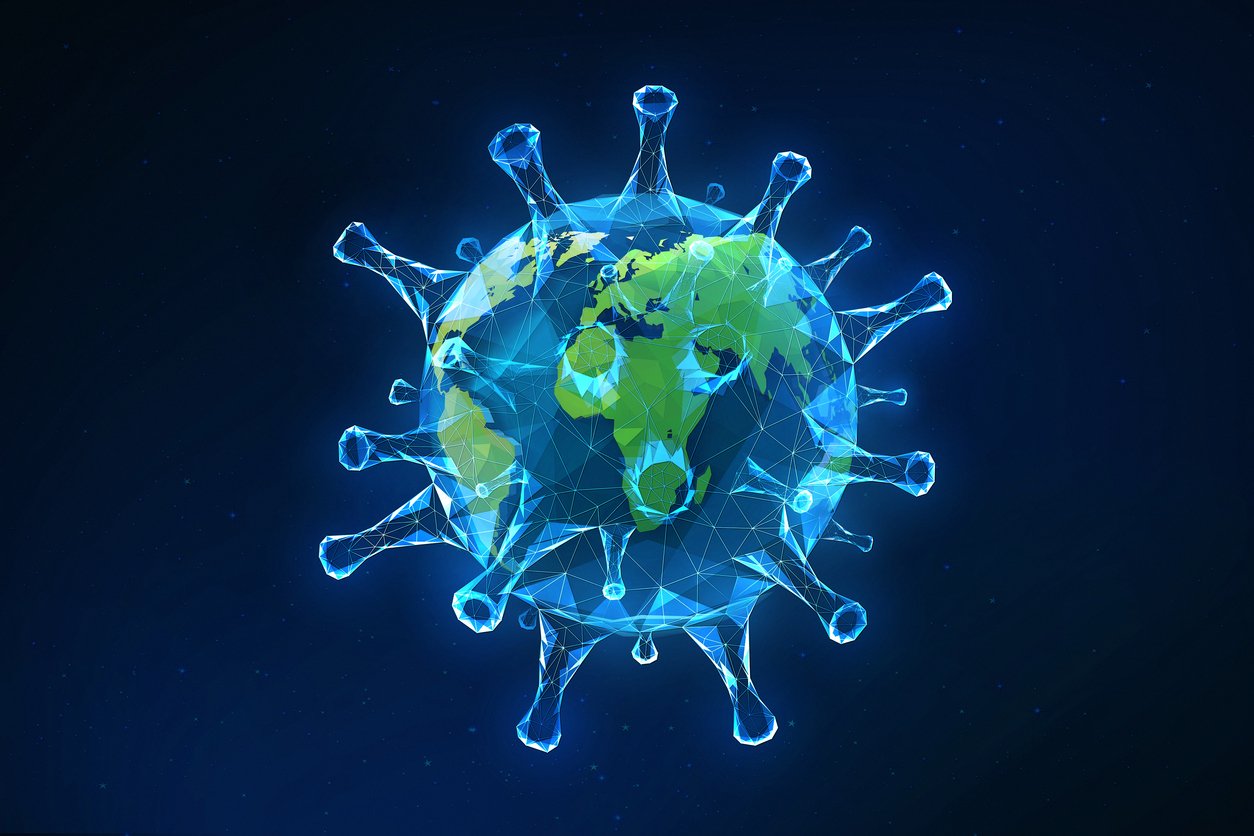 3D Rendering of planet Earth made to look like a virus cell.

Dr Padraig McGarry’s time as IMO President has been unusually long and has taken place during extraordinary times. He talks with David Lynch about the challenges posed by Covid-19 and the pressing issues facing the medical profession

Longford GP Dr Padraig McGarry is not meant to still be the President of the IMO. One of the many things the pandemic has impacted is the annual changes in leadership at the Organisation.

In April last year the IMO AGM was cancelled, and following an ‘abridged’ AGM in October it was decided that the current union leadership, including Dr McGarry as President, would stay in place until a full AGM (which may take place virtually) later this year.

His prolonged presidency has taken place against the backdrop of an extraordinary period in Irish and global medicine.

“I am hopeful for the speedy roll-out of an effective and safe vaccination programme into which all stakeholders buy into so as to protect the community at large,” Dr McGarry told the Medical Independent (MI) before Christmas.

“This requires a significant educational input from the HSE, the Department of Health and the wider professional bodies.”

Alongside the continuing pandemic, there are also significant industrial relations matters in the immediate future. Dr McGarry was speaking to MI before the most recent upsurge in Covid-19 cases over the festive period and the decision by IMO public health doctors to defer planned strike action later this month (January) because of the escalating severity of the pandemic.

Late last year, IMO public health doctors voted in favour of taking strike action for three days this month. The doctors are seeking consultant status in line with their medical colleagues and improved work models for the profession, as recommended in the 2018 Department of Health-commissioned Crowe Horwath report.

“Firstly, I think it is appalling that public health doctors have been left to hang out to dry to the extent that they have been,” Dr McGarry told MI.
“It is a very straightforward issue they (Minister for Health and the Government) can deal with… I did hear a particular politician trying to bring this into the domain of it being a financial issue. Yes there are financial issues, if you are working as a consultant you are entitled to get paid as such, but what they have sought is nothing that they are not entitled to.

“They are entitled to parity of esteem. They have the same qualifications as anyone else with specialist training… it is nothing more than other consultants in senior posts are entitled to.”

Dr McGarry said the proposal to offer public health doctors Sláintecare contracts is “totally disingenuous” given these contracts “don’t exist”.
In December 2019 then Minister for Health Simon Harris announced a new Sláintecare contract for consultants that would be for public-only work.
However, this contract has yet to be introduced. Last month the Department provided no date to this newspaper for when this might happen.

“There is no such thing as a Sláintecare contract,” continued Dr McGarry. “Now all that is doing is prevaricating and kicking it down the road. It is appalling and it is particularly appalling where they are prepared to play fast and loose when you consider how the public health system has stood up to this pandemic.”

“I wonder if a group of cardiologists or surgeons were in a similar frame would the same thing happen? I think it is appalling and I think it needs to be addressed immediately. It is one thing to give a round of applause, but they should give them what they are due, give them respect.”

In his own area of general practice, the roll-out of the chronic disease management programme continues and Dr McGarry said that “patients love it and benefit from it”.

“I think in the long run it will be seen as one of the more enlightened approaches that the HSE, prompted by us, have adopted and, hopefully, it will be a template for further roll-outs down the line.”

Such a template may be applied in mental health in primary care in the future. Recently Dr Denis McCauley, Chair of the IMO’s GP committee, and Dr Sumi Dunne, who is also on committee, told the Oireachtas sub-committee on mental health that Covid-19 has had significant psychological effects on people across the country.

The GPs recommended that investment in a clinical programme of care for mental health should be negotiated, similar to the chronic disease management programme.

“We feel that there is a huge amount of mental health issues in the community, most of which is being dealt with by general practitioners,” Dr McGarry told MI.

“It does require time and we feel that it is as important to have a similar structured approach to mental health. We would encourage the Department of Health, the HSE, and the Government to look favourably at this. It was one of the conditions (mental health) we had mooted from the outset that this could possibly be one of them.

“It was always a hope that this (structured patient management programmes) would be expanded into further conditions down the road and we would encourage it to be considered favourably.”

He does not expect talks on such a new programme to begin soon. But he said the initial idea is important.

“I mean we are in the process of rolling out the chronic disease programme year on year,” he said.

“We started off with over-75s, then onto 70s, then 65s, so I suppose you don’t want to overburden general practice straight away. This has been brought on incrementally and it will be maintained and it’s a workload that will be a permanent feature in general practice. It is being resourced; it is something that we encourage.”

Reflections on a pandemic

How does the wave of Covid-19 from September onward compare to last March/April?

The first wave brought about uncertainly and fear of the unknown, but with it a unity of purpose by the community to tackle the problem through rigid adherence to public health advice. This was facilitated by a spell of spectacular and unseasonal weather, which helped ease the burden and facilitated adherence to advice.

The second wave crept up gradually – initially with a lesser sense of fear – possibly reflected by a certain laxity – but as it progressed into a predictable pattern that sense of purpose returned with a willingness to try and deal with the problem once and for all.

Unfortunately we are still in the grip of this second wave – the outcome of which remains uncertain and the solutions may not be as straightforward, as the massive financial impact of this crisis impacts on decision-making.

The first phase, initially, brought an almost immediate standstill to the non-Covid face-to-face workload – to be replaced by an enormous phone call and telemedicine workload – a very new experience for both patient and doctor alike. Unfortunately, this brought with it a reluctance in patients presenting with sometimes serious conditions – something GPs strove to mitigate.

As the first wave reduced there was a gradual return to the traditional face-to-face consultation as patients’ fears were allayed – with a significant ‘catch-up’ required.

As the second wave commenced the face-to-face consultation remained and was encouraged – but there was superimposed the rising demand for Covid-19 services – resulting in a very busy time for GPs.

When you look back over the pandemic, is there one professional or personal experience that stands out?

The stand-out experience for me was the reality that referral pathways for patients into secondary care, which had proven so necessary for the smooth running of the health service, were in some instances ‘stood down’ with little or no options for patients – as the private hospitals, where access may have been available in the past, were similarly not available.

This gave me considerable unease as potential delays in dealing with health problems for patients due to this lack of access became a glaring reality.

I would like to see a significant reduction in the R number as we move into Christmas so we do not experience the expected third wave at the end of December/early January.*

I would like to see the public health dispute immediately resolved so recruitment into this sector can commence – dealing with the pandemic effectively is contingent on a robust public health system – which unfortunately does not currently exist.

I am hopeful for the speedy roll-out of an effective and safe vaccination programme into which all stakeholders buy into so as to protect the community at large. This requires a significant educational input from the HSE, the Department of Health, and the wider professional bodies.

Is there one major lesson for the health system when this pandemic is over?

The lesson that non-Covid work cannot be stood down now or into the future needs to be at the core of any decision-making process when we are deciding on any future models of care. The lesson that the foundation of any functioning healthcare system is a strong, healthy workforce that is valued and respected.

For too long the employers of healthcare workers operate on the principle of having a contractual mindset to employees with the expectation of a vocational response – this was never a valid premise and should not be used now or into the future. Treat your workforce well and you will be repaid in spades.

*Dr McGarry was speaking to MI before Christmas.