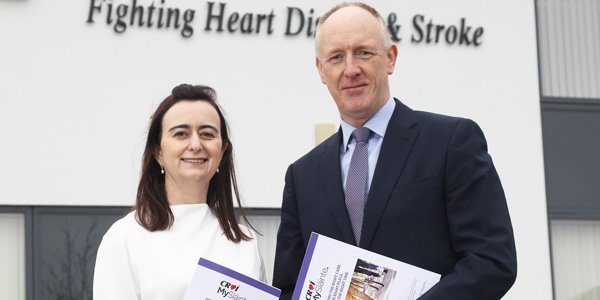 A new report on the outcomes of an innovative digital cardiovascular disease prevention and recovery programme developed by Croí, the Irish heart and stroke charity, has found that it has delivered significant health improvements for participants.

The Croí MySláinte programme, funded by the Government of Ireland’s Sláintecare Integration Fund 2019, had to be delivered virtually due to restrictions on traditional healthcare delivery imposed as a result of the Covid-19 pandemic.

Croí’s pivot to virtual delivery involved the creation of a newly-developed interactive platform, which enabled participants to access the programme from the comfort and safety of their home, including access to pre-recorded videos, resources and links to weekly live Zoom sessions. The core components of the programme included lifestyle modifications such as smoking cessation, healthy food choices and physical activity; medical risk factor management of blood pressure, cholesterol and glucose; and electronic prescribing of cardio-protective medication where appropriate.

A total of 105 people, who had experienced a cardiac event such as a heart attack, opted to take part in the initiative. Participants were aged between 35 and 84 years, and were referred from cardiac centres across the west of Ireland, including Galway, Mayo, Sligo, Limerick and Donegal. Following a total of 423 virtual consultations over a period of 12 weeks, a range of health improvements resulted for those involved, including:

·         Anxiety and depression levels among participants were reduced by more than half.

Many of the participants were also living with other health issues such as diabetes, arthritis, chronic kidney disease and cancer, meaning wider benefits for their other conditions also.

Participants were empowered to manage their health and well-being, stress and emotional eating. Advice was also provided on making and maintaining lifestyle changes in the areas of sleep hygiene, sexual health and returning to work. In addition, participants were provided with a Fitbit device to track their daily exercise activity, as well as blood pressure monitors for home measurement, and food and exercise diaries to help monitor progress towards their goals.

The programme, which was overseen by a consultant cardiologist, was delivered by a specialist interdisciplinary health team comprised of a cardiovascular nurse prescriber, a physiotherapist and a dietitian.

Dr Lisa Hynes, Head of Health Programmes at Croí, comments:
“We know that every year approximately 10,000 people die here from cardiovascular disease or CVD. Globally, and in Ireland, CVD is the leading cause of death and disability with approximately half of all deaths occurring in those with disease. Cardiac rehabilitation programmes, which are traditionally provided as a face-to-face activity, are proven to reduce cardiovascular death and disability.

“Through the virtual Croí MySláinte programme, we’re proud to have developed a new way to deliver this care with clinical outcomes that are comparable with those observed in traditional face-to-face programmes.

“One of the really welcome outcomes of the programme was the improvement in meeting physical activity targets, which increased from 14% to 82%. Achieving this level of physical activity has been shown to provide a 20-30% reduction in cardiovascular events such as heart attacks and strokes. Equally, improvements in weight management, LDL cholesterol levels, blood pressure, anxiety and depression, are all associated with significant reductions in overall cardiovascular risk.”

The report has now been presented to the Minister for Health Stephen Donnelly, who officially opened its virtual launch at an event attended by stakeholders.

Pictured above following the publication of the report are Ms Irene Gibson, PhD candidate and Director of Programmes and Innovation, National Institute for Prevention and Cardiovascular Health, with Mr Neil Johnson, Chief Executive, Croí.