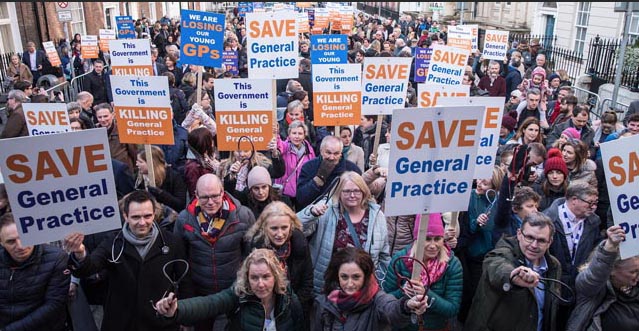 In a statement to members, the IMO stated that the talks are “intensive” and that the Organisation was “engaged for a number of days each week for the past three months with the Department and the HSE”.

“We hope that over the coming weeks we will be able to reach an agreement,” according to the statement.

“However, it is important to state that we are also prepared to walk away from any deal that is not in the best interest of general practice.”

However, during the press briefing in Buswells Hotel, Molesworth Street, Dublin, organised by the NAGP in advance of the protest, Dr Walsh questioned how substantive the talks were, casting doubt on whether they would result in a new contract.

Speaking to the Medical Independent (MI), Dr Walsh, who is a GP based in Kerry, said: “It would be far more helpful if the [IMO] was willing for all of us to be at the table and negotiate on behalf of all of us. I am not answerable for and can’t account for what they do and what they decide not to do. But I think we are far more powerful as a collective than as individual organisations tearing each other apart. So I would extend the hand to the IMO and say ‘we are looking to represent general practice. And by representing general practice, we are representing the general public’s health and welfare. So let’s be collective, let’s be diplomatic and mature, and negotiate for the betterment of all of us’.”

Dr Walsh told MI that the purpose of the protest, which takes place today (Wednesday 6 February) outside Leinster House was to raise awareness with the public about the pressure general practice is under.

“This has been brewing for a long time,” according to Dr Walsh.

“An awful lot of us were very conscious of the fact that today we were closing our practice doors. That is a financial loss. And a lot of people can’t afford to incur that. I am fortunate to work with colleagues who are taking the slack up today, but we had been thinking and asking our members for a long time about the next course of action and they were pushing and adamant for this. So it wasn’t something we arrived at easily.”

During the press briefing, NAGP chairperson Dr Andy Jordan said FEMPI needed to be fully reversed and increased funding of €400 million to €500 million was necessary in order to make general practice sustainable.

As an example of the financial pressure general practice is under, Dr Jordan revealed that three secretaries left his practice this year because there was not sufficient money for pay rises.

NAGP President Dr Maitiu O’ Tuathail said there was no capacity in general practice to take on new services promised under Slaintecare at present.

“We have 26 communities in Ireland at the moment that don’t have a GP,” according to Dr O’Tuathail.

“That figure is going to exponentially increase. What we are asking for at the moment is a reversal of FEMPI. What that will give us is, it will make general practice sustainable, only sustainable. Once general practice is resuscitated with that funding we can talk about additional work.”

It is expected hundreds of GPs will take part in the protest, which is currently ongoing.