From the archive: The Dublin Hospitals Rugby Cup 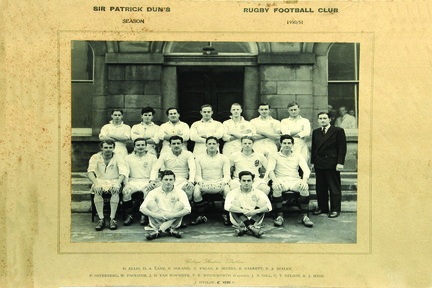 The Dublin Hospitals Rugby Cup is Ireland’s oldest rugby competition, established in 1881 by a group of Dublin doctors, including William Thornley Stoker (brother of Bram), to foster friendly competition between the various Dublin Hospitals. Sir Patrick Dun’s Hospital was involved from the beginning and was especially dominant in the early years of the competition, winning the cup 16 times in the first 30 years. Amongst the hospital archive, held in the RCPI Heritage Centre, is a series of photographs of all but one of the hospital’s winning teams. Several of the Dun’s players would go on to represent Ireland internationally in rugby, including Bethel Solomons who can be seen in the 1904 team photograph. A book on the history of the cup is being written by Dr Morgan Crowe, Dr Michael Farrell, and Dr Con Feighery, and will be published in 2021.