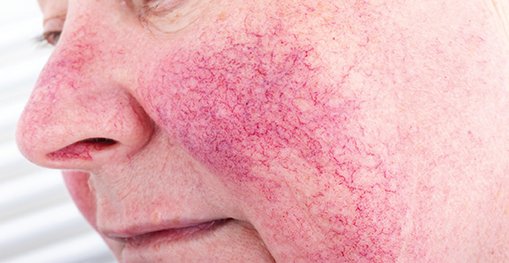 Known as the ‘curse of the Celts’, rosacea is one of the most common skin conditions seen in Irish patients.

People who develop rosacea commonly tend to flush/blush very easily. Key triggers include a change in environmental temperature and consuming hot drinks, alcoholic beverages or spicy foods. Because the redness of rosacea is made worse with alcohol intake, some wrongly attribute the cause of this disorder to alcohol excess. Other key triggers are sunlight exposure and stress and it can be a highly stigmatising skin condition.

Prof Frank Powell, Professor of Dermatology, University College Dublin, Charles Institute for Dermatology, and one of Ireland’s leading authorities on rosacea, has written a booklet on rosacea, supported by the Irish Health Research Board (HRB) entitled: ROSACEA: The Curse of the Celts — A Handbook for Patients and the General Public.

He noted that the condition usually affects people in their 30s or 40s. Both men and women are affected, but rosacea appears to be more common in women, with men generally having the more severe disease.

Once rosacea starts, it usually persists, fluctuating in severity over many months or even years. Eventually, rosacea clears or ‘burns itself out’ and it is rarely seen in elderly persons, he notes.

A person who develops rosacea initially notices small red spots on their nose, chin, forehead or the cheeks. There is a slight stinging sensation from these spots, but no real itch, soreness or discomfort. The red spots typically appear in groups of two or three that persist for about 10 days, Prof Powell writes in his booklet

These spots gradually flatten and merge into the skin, leaving behind a slight red blotch, like a ‘footprint’ of where they have been. Unlike the lesions of teenage acne, there is no tendency to scarring of the skin.

If no treatment is given, this process continues over many months and gradually gets worse, Prof Powell says. The red blotches become more widespread and blend together so that the rosacea sufferer progressively develops a striking and embarrassing redness at the centre of their face.

According to Prof Powell, a consistent but often overlooked finding in the skin of patients with rosacea is the presence of tiny skin mites called demodex folliculorum. These microscopic creatures live in the oil canals of the face and the eyelids. Patients with rosacea have about four times as many demodex mites in their skin compared with people with clear skin.

Research funded by the HRB has helped to determine what the relationship is between these mites and rosacea. This research has shown that the oil in the skin of rosacea patients is different and possibly conducive to the multiplication of these mites.

While some anti-mite treatments can clear skin lesions in rosacea patients, these treatments have not yet been studied in sufficient detail to ensure they are safe and effective in the long-term, he says.

While there is no definitive cure for rosacea, the condition can be well managed and there are a number of new topical treatments on the market, as well as improved laser treatment and prescription of antibiotics to tackle the root causes.

Making lifestyle changes, such as avoiding possible triggers and wearing high-factor sensitive skin sunscreen and avoiding direct sunlight where possible, can be a good way of controlling the symptoms of facial flushing. As strenuous exercise can trigger an outbreak of rosacea, a low-intensity exercise programme, such as walking or swimming, may be better than high-intensity activities, such as running or aerobics.

It is generally possible to disguise the patches of persistent red skin using specially-designed camouflage or high-coverage make-up, with a wide range of such products available in pharmacies.

Patients should be advised to avoid using oil-based make-up, scented soaps, alcohol-based skin cleansers or other facial or hair products that contain ingredients that might irritate skin, such as alcohol and fragrances. Skin-care products that are suitable for sensitive skin or non-comedogenic are best for rosacea patients, with a number of rosacea-specific skincare products and ranges now widely available.

A number of treatments are effective in treating the spots and pimples caused by rosacea, with new products coming on stream in the last couple of years. Treatments include metronidazole cream or gel (topical metronidazole) for the treatment of mild-to-moderate spots and pimples; azelaic acid to help unblock pores and reduce inflammation; isotretinoin is occasionally used to treat acne rosacea, but can only be prescribed by those with specialist experience, while Soolantra (ivermectin 1 per cent) cream is another recent option especially for rosacea.

The most common antibiotics used to treat rosacea related issues are tetracyclines and erythromycin.

Tetracyclines are not suitable for women who are pregnant or breast-feeding, as they are teratogens and can cause birth defects in unborn children and interfere with normal bone development in breast-fed children. They are also unsuitable for people with a history of kidney disease.

Erythromycin can be used in women who are pregnant or breast-feeding. It should be used cautiously in patients who have a history of liver or kidney problems and myasthenia gravis.

Erythromycin can interact with a number of medications, including warfarin and statins.

The symptoms of visible blood vessels associated with rosacea are known as telangiectasia. Treatment for telangiectasia will usually require a referral to a dermatologist.

Laser treatment is one of the most widely-used treatments for telangiectasia. Laser treatment can cause some pain, but most people do not need to have an anaesthetic.

Side effects of laser treatment are usually mild and can include swelling and redness of the skin, bruising, crusting of the skin, blisters, and infection in rare cases.

These side effects usually only last a few days and are rarely permanent. An infection will require treatment with antibiotics.

Thickened skin (rhinophyma) is a symptom of rosacea that often affects the nose. If a patient has severe rhinophyma the GP may refer to a dermatologist or plastic surgeon.

A number of surgical treatments are available to remove any excess tissue and remodel the nose into a more pleasing shape. This may be done with a carbon dioxide laser or a scalpel.

Rosacea that affects the eyes (ocular rosacea) can lead to a number of eye conditions.

Blepharitis is the most commonly-reported eye condition resulting from rosacea. It can usually be successfully treated by adopting a daily eye-cleaning regimen and by using antibiotic tablets and creams.

Up to one-in-20 people with rosacea may experience symptoms that affect their cornea. This can make eyes bloodshot and watery and cause scarring of the cornea.

In severe cases, if it is not treated, ocular rosacea can lead to vision loss. GPs may refer such patients for treatment to an ophthalmologist.

Eye hygiene measures. If a patient has blepharitis, they may need to clean their eyelids with a warm compress (a cloth warmed with hot water) or cotton bud.

Antibiotics such as tetracyclines.

The 22nd Primary Care Dermatology Society of Ireland (PCDSI) Annual Scientific Conference, which was held in the Galmont Hotel in Galway from 21-23 February, opened with a special symposium on acne and rosacea.

Opening the event, GP and PCDSI Chairperson Dr Karen Reidy stated that rosacea is a common problem in general practice, but can often be difficult to diagnose and manage.

Consultant Dermatologist at the Mater Private Hospital, Dublin, Prof Frank Powell, who is one of Ireland’s leading medical experts on rosacea, was first to the podium. He spoke on the topic ‘Rosacea – pathogenesis and clinical presentation’ and began by discussing the definition of rosacea.

The problem, he told delegates, is that people often have a vague notion of what rosacea actually is.

Commonly referred to as ‘redness in the face’, Prof Powell argued that the use of such a broad, wide-ranging term for the condition has perhaps resulted in several disorders of separate pathogenic pathways being diagnosed as rosacea.

He postulated that this has led to a poor understanding of the pathogenesis of the disorder and the lack of a structured approach to treatment.

He looked at the four subtypes of rosacea classified by the US National Rosacea Society, including erythematotelangiectatic (ETTR) rosacea, papulopustular (PPR) rosacea, phymatous rosacea (also known as rhinophyma) and ocular rosacea.

Prof Powell noted that frequent flushing is a characteristic of ETTR, but maintained that not all ‘flushers’ actually have rosacea. Rosacea is more common in pale-skinned, blue-eyed individuals. Around 14 million have the condition in the US, while almost 3 per cent of people in Ireland have rosacea.

Dr Ramsay pointed out that clinical severity does not correlate with psychological distress, according to data. Rosacea is associated with social stigma and lower self-esteem and can have an adverse impact on a person’s quality-of-life. But quality-of-life improves with successful rosacea treatment, studies have shown. In helping to determine the state of mind of a patient with acne or rosacea, Dr Ramsay advised that patient questionnaires can be very helpful for clinicians.