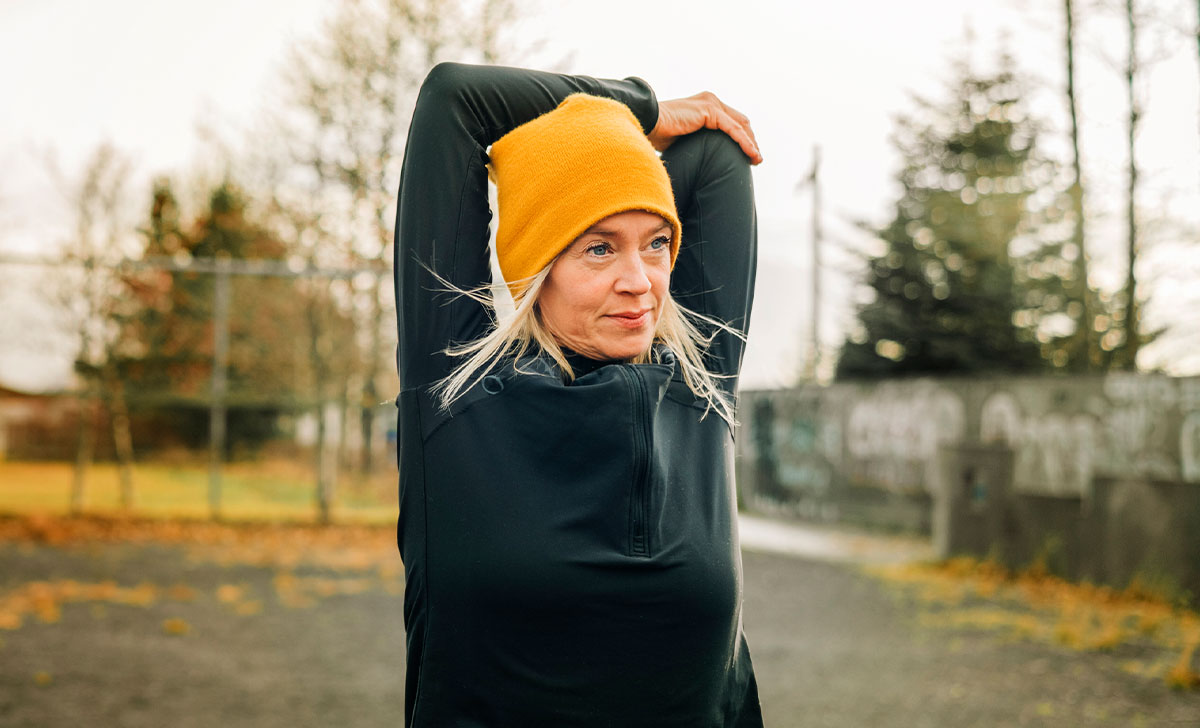 In the past chronic obstructive pulmonary disease (COPD) was thought to be an untreatable condition. While it is still incurable, pharmacological management alongside exercise prescription is proven to enhance the lifestyles of individuals living with this condition.

The Global Initiative for Chronic Obstructive Lung Disease (GOLD) guidelines’ definition of COPD is a disease state characterised by airflow limitation that is not fully reversible. The airflow limitation is usually both progressive and associated with an abnormal (magnified) inflammatory response of the lungs to noxious particles or gases.

As a result, physiological abnormalities in the lungs include mucus hypersecretion, ciliary dysfunction, airflow limitation, hyperinflation, and gas exchange abnormalities. At advanced stages of the condition pulmonary hypertension and cor pulmonale are evident.

The most commonly prescribed medications for COPD are bronchodilators, corticosteroids and antibiotics. In more severe cases supplemental oxygen therapy may be required.

Despite ongoing debate over the effectiveness of corticosteroids, this treatment has shown favourable responses during an acute exacerbation, primarily by breaking down phospholipids involved in the inf lammatory process. However, chronic treatment with systemic corticosteroids should be avoided because of unfavourable side-effects; hyperglycaemia, osteoporosis, muscle myopathy, and peptic ulcer.

While the exact mechanisms by which antibiotics reduce exacerbations are not fully understood, their effectiveness may be due to altering mucus production, reducing oxidative stress and/or bacterial infection while simultaneously altering the inf lammatory process.

Exercise prescription as part of the medical treatment plan

Before giving guidance on physical activity or formal exercise, a number of COPD considerations must be addressed. It is essential to determine the level of hypoxia during rest and physical activity, as well as cardiac risk stratification. As a result, if the patient is deemed to require supplemental oxygen during exercise it is best that the patient is seen in a formal, hospital-based pulmonary rehabilitation setting (as an outpatient). Otherwise the patient can appropriately and safely be referred to a chartered physiotherapist or clinical exercise specialist.

Collaborating with a physiotherapist/ clinical exercise specialist (who has the benefit of greater time available per consultation with patients) can significantly impact adherence, behaviour change and motivation for the COPD patient. Furthermore, the medic can outsource the time-consuming assessment work, such as taking objective outcome measures. Finally, specificity around frequency, intensity, type, and time (FITT) principles of the proposed exercise can also be determined by the chosen allied health professional.

Aerobic exercise is recommended for individuals in all stages of COPD. Exertional dyspnoea is a common symptom in COPD, therefore the modified Borg Category Ratio 0-10 (CR10) is used extensively for accuracy and patient reassurance. Individuals should be given specific, standardised instructions on how to relate the wording on the scale with their level of breathlessness.

Given that these Borg dyspnoea scales are subjective, some caution is advised in their interpretation. For example, an inexperienced ‘exerciser’ may have an ‘up-regulated’ sympathetic nervous system response to their underlying dyspnoea. As a result, further shallow breathing can cause unnecessary panic for the participant. This can result in a loss of confidence, leading to the all too familiar fear/avoidance cycle with exercise.

A 63-year-old woman presented with worsening shortness of breath along with wheezing and chronic cough. She was diagnosed with COPD in 2017 and has had multiple exacerbations and two hospitalisations in the last two years. Her GP referred her for an exercise prescription in a bid to improve her quality-of-life.

She is currently working full-time as a civil servant. She describes work as a stressful environment with limited time for exercise. She has accumulated a smoking pack year history of 40 years. She admits to only being active during ‘short strolls’ with friends at the weekend. She experiences shortness of breath and a wheeze that worsens during these walks with minimal sputum expectorated. She has to take breaks throughout these short strolls. She drives a short distance to work (approximately a five-minute drive) because she reports that she cannot walk 100 metres without taking a rest. She would love to walk to work, but currently is unsure whether this is attainable. Regardless, she is currently planning for retirement in the next 18- to-24 months and her primary goal is to be fitter and stronger upon retirement, without underlying concerns about hospitalisation and poor quality-of-life.

In addition, her medical history includes osteoporosis (her most recent T-score reading being -2.7 on a DEXA scan at neck of femur bilaterally), hypertension and hyperlipidaemia. These conditions are medicated with a combination of denosumab, amlodipine, and atorvastatin, respectively. Recently she has been prescribed salbutamol to be taken PRN and tiotropium for longer term management.

Previous investigations from her last hospital stay included a chest x-ray which showed evidence of hyperinflation and mild consolidation in lower zones. Her FEV1 score was 46 per cent, putting her into GOLD stage 3 for COPD. Upon discharge her arterial oxygen saturation was SaO2 = 95 per cent post oxygen therapy.

On presenting to the clinic for her proposed exercise prescription, her SaO2 had decreased to 91 per cent, explaining her recent subjective history of worsening symptoms. This was again reflected in her subjective outcome measures, the CAT (a COPD assessment scale) and mMRC (dyspnoea scale) scored 18 and grade 3, respectively.

It is well-documented that pulmonary disease has a negative effect on the lungs. Crucially, however, it can also have a negative effect on the skeletal muscles, through lack of usage, resultant atrophy, and weakness. Therefore strength training is the most potent intervention to address the level of muscle dysfunction seen in COPD. It should be an integral part of the overall exercise prescription.

Furthermore, because individuals with COPD may experience greater dyspnoea while performing ‘activities of daily living’ (ADLs) involving the thorax and upper extremities, it is advisable to include strength training exercises for the upper body in particular.

Peripheral muscle dysfunction contributes to exercise intolerance among medical patients in general. And in those with COPD, sarcopaenia is commonplace. The prevalence of falls is thus widespread in COPD patients. Given the widespread prescribing of corticosteroids, and the resultant loss in bone mineral density, the prevention of falls are of paramount importance. Falls are multifactorial, but certainly involve muscle weakness, gait, and balance abnormalities among the risk factors. Therefore, lower extremity strength and balance training are highly effective countermeasures. As such, coherent exercise advice in the medical setting ought to include some reference to aerobic training, subjective exertion levels, strength training (for the upper and lower extremities), and balance retraining.

After an exercise intervention of two 30-minute (combined AER + RES) sessions per week over a six-week period, there were significant and positive improvements in our case report patient (see Figure 2). Testing showed an improvement in 6MWT score from 190m to 261m. This new score takes the patient out of the ‘at risk of hospitalisation’ group. The score is still below average (all patient COPD average=380m), but her prognosis with the disease has improved as a result. 6MWT scores have been shown to be significantly correlated with FEV1 and other spirometry measures as ref lected in her new FEV1 of 54 per cent, lowering her into GOLD stage 2, further ref lecting an improved prognosis. Her Sa02 has returned to 95 per cent and with consistency in her exercise routine, she should be able to maintain this level independently. Notably there are significant improvements in strength and function shown in the improved scores for STS and 5xSTS. Finally, the Berg balance assessment has also seen a statistically significant shift in the patient’s falls risk status.

Empirical evidence shows that exercise is a beneficial intervention for COPD patients. Reducing risk of hospitalisation can be considered a profoundly beneficial outcome in the COPD cohort, particularly in the current public health environment.

However, the literature suggests that exercise intervention does not improve overall prognosis for lung function, given the pathophysiological trajectory of the condition. The lasting and practical benefits are seen in (patient reported) improved quality-of-life scores. For example, upper limb strength training can restore independence and dignity around ADLs. Similarly, peripheral muscle strengthening in the lower limbs can improve walking duration, distance and speed despite negligible changes in lung function.

It is widely acknowledged that time constraints (in a medical consultation) cannot and will not lend themselves to this level of lifestyle intervention. However, with an overwhelmingly positive evidence-base in favour of exercise as a COPD management strategy, it is vital that physicians refer patients onward for appropriate intervention. Furthermore, the new HSE primary care chronic disease management programme for COPD patients provides scope for individualised patient reviews and lifestyle management as a key part of a holistic approach to treating this disease.

Acknowledgement: Thanks to Dr Gordan Cantwell, GP; and Dr Fergal McNamara, GP, for their input.