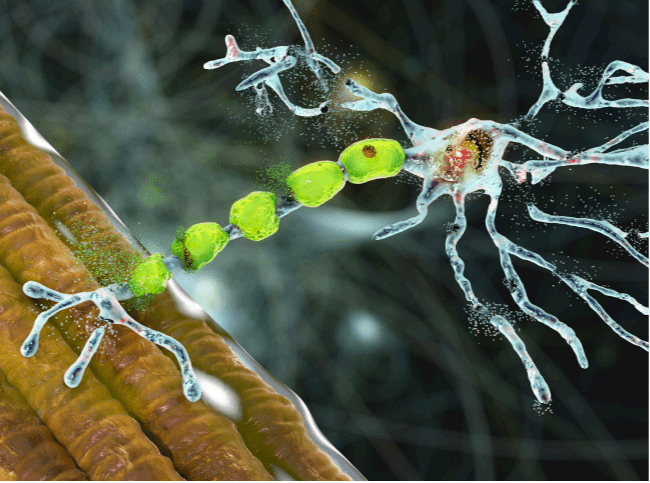 There are approximately 400 people living with MND in Ireland at any one time and an average
of 150 new cases of this rare, incurable disease are diagnosed annually.

Motor neurone disease (MND) is a rare, progressive, life-limiting disorder for which there is no cure, and the rate of progression varies greatly from person to person. MND refers to a group of chronic, sporadic, and hereditary neurological disorders characterised by progressive degeneration of motor neurons. Upper motor neurones, lower motor neurones, or both may be affected. Approximately 5-to-10 per cent of people diagnosed with MND have an inherited or familial form, however, the majority of people diagnosed have the sporadic form, of unknown aetiology.6,7

Amyotrophic lateral sclerosis (ALS), also known as Lou Gehrig’s disease, involves progressive degeneration of upper and lower motor neurones and is one of the most serious types of MND. The terms MND and ALS are often used interchangeably, however, MND is the generic term for many different types of neurological disorders, including primary lateral sclerosis (PLS), and progressive muscular atrophy (PMA), with ALS being the most prevalent.1,3

Both PLS, which affects the upper motor neurones only, and PMA, which affects the lower motor neurones only, carry a better prognosis than ALS. Individually, amyotrophy and lateral sclerosis are processes that can occur as part of several other neurological conditions, however, there are virtually no other neurological conditions except ALS in which both processes occur simultaneously. Almost 90 per cent of patients with MND have the mixed ALS form of the disease, so the terms MND and ALS have become synonymous.4

ALS is characterised by the degeneration of both upper and lower motor neurones, leading to the ultimate failure of all voluntary muscles, with rapid disease progression and a median survival rate of three years.1 Half (50 per cent) of affected patients live at least three or more years after diagnosis, 20 per cent live five years or more, and up to 10 per cent survive more than 10 years.15 Initial signs of ALS include weakness in the muscles that control swallowing, chewing, and speech. Over time, there is a weakening of the muscles used to move the arms and legs and to hold the body upright. This muscular weakness occurs on both sides of the body. Eventually, the muscles that control breathing become so weak that those affected lose the ability to breathe on their own.3

Until recently, ALS was classified primarily within the neuromuscular domain, however, new imaging and neuropathological data have indicated the involvement of the non-motor neuraxis in disease pathology. ALS is more accurately characterised as a group of neurodegenerative disorders that affect both the corticospinal tract and the anterior horn cell resulting in muscle denervation and atrophy.

While some forms of ALS/MND are primarily motor system degenerations, evidence from genetic, clinical and imaging studies have shown extensive overlap between ALS/MND and frontotemporal dementia (FTD).1,2 Over 50 per cent of ALS patients develop cognitive and behavioural impairment with 13-to-15 per cent presenting with co-morbid behavioural variant FTD.1,7

The Irish MND register includes all known patients diagnosed with MND each year. The purpose of the Register is to track the incidence, prevalence and clinical features of MND in the Irish population. There are approximately 400 people living with MND in Ireland at any one time.13 The frequency of MND is relatively consistent within populations of European extraction.

Around onein-30,000 develop MND each year. In Ireland, this amounts to approximately 150 new diagnosis every year.6 The condition can affect adults of all ages, including teenagers, although this is extremely rare. It is usually in people over 40 years of age with peak age of onset in the early 60s and it affects slightly more men than women.

The symptoms of MND begin gradually over weeks and months, usually on one side of the body initially and the condition gets progressively worse. As the nerves become damaged, the muscles they control weaken and atrophy. The muscles first affected tend to be those in the hands, feet, mouth, and throat, depending on which type of the
disease it is.

Common early symptoms include a weakened grip, which can cause difficulty picking up or holding objects; weakness at the shoulder that makes lifting the arm difficult; a ‘foot drop’ caused by weak ankle muscles; dragging of the leg and slurred speech (dysarthria).

As damage progresses, symptoms spread to other parts of the body and the condition becomes more debilitating. Eventually, a person with MND may be unable to move. Communicating, swallowing, and breathing may also become very difficult.

MND does not cause sensory, visual or hearing disorders, so sight, smell, touch, and hearing remain intact, as do the sphincter muscles that control the bladder and bowel. Life expectancy is variable, usually from three-to-five years after onset, depending on the activity of the disease and the particular muscle groups affected.6,7

There is no definitive diagnostic test for MND. Investigations are aimed at confirming the presence of upper and lower motor neurone degeneration, while excluding other conditions that could mimic the clinical presentation.1

Other conditions such as benign cramp fasciculation syndrome, cervical radiculomyelopathy, dual pathologies, inclusion body myositis, and multifocal motor neuropathy with conduction block can mimic motor neurone disease, and it is important to consider these.8

Neuroimaging is performed to exclude structure pathology and neurophysiological studies is performed to confirm the presence of acute and chronic denervation, the absence of sensory findings and ensure mimic syndromes are excluded.1

The lack of a definitive test can cause problems, particularly if patients are seen very early after onset of symptoms,
when the signs may be limited.8

In addition to a complete medical history and physical examination, diagnostic procedures for MND may include laboratory tests – including blood and urine studies and thyroid function tests; muscle and/or nerve biopsy; cerebral spinal fluid analysis; x-rays; MRI; and electro-diagnostic tests that evaluate and diagnose disorders of the muscles and
motor neurons.

There is currently no cure for MMD. Treatment is aimed at keeping the person comfortable, improving their quality-of-life and compensating for the progressive loss of bodily functions, such as mobility, communication, swallowing, and breathing.7

Riluzole is currently the only licenced agent that can be used to treat some forms of MND. While not a cure, research has shown that it can modestly prolong survival. It is thought to slow down the progressive damage to motor neurone cells by reducing their sensitivity to the nerve transmitter glutamate. The prescription of riluzole should only be started by a specialist who has experience in the management of MND.

The standard dose of riluzole in the management of ALS is 50mg twice daily. The most common adverse effects
include nausea, asthenia, and derangement in liver enzymes.

Pancreatitis and fulminant hepatic failure have also been reported as rare adverse effects. Regular blood testing every month for the first three months, followed by three monthly for nine months and then yearly, is recommended. Although research has shown that sustained use of riluzole for 18 months is not associated with improved muscle strength, it has been shown to improve survival by three months, which is equitable to a 9 per cent increase in one-year survival.10

Up to 10 per cent of all people diagnosed in Ireland with MND carry the abnormal C9orf72 gene, which can
cause both MND and dementia.9

Stem cell therapy is a novel area of research that has fuelled hope of a treatment for a variety of conditions including MND, however, there are many unanswered questions surrounding its use. Although the use of stem cell therapy for MND may eventually be possible, the research is not sufficiently well advanced, and in Ireland embryonic stem cell research is currently not allowed.

The UK is currently one of the world leaders in embryonic stem cell research.13 In February 2021, the University of Edinburgh issued a press release stating that a cohort of their scientists had unveiled interesting lab results that could lead to potential future treatments. The study looked at how improving the function of mitochondria could be a possible treatment for MND. The scientists discovered that in human stem cell models of MND, the axon is shorter than in healthy cells and that the movement of the mitochondria, which travel up and down the axons,is impaired.

The research showed that this was caused by a defective energy supply from the mitochondria and that by boosting the mitochondria, the axon reverted back to normal. The results of the study are now being used to look for existing drugs that boost mitochondrial function that may be able to be repurposed to treat MND.14

Several promising clinical trials are being conducted worldwide, yielding important information on how to combat MND. While the search for an effective treatment and cure continues, multidisciplinary teams across the globe assist patients and their families to adjust to the many challenges of living with ALS.

Teams of specialists use devices and therapies to help patients manage their ALS symptoms, maintain their independence and quality-of-life. Occupational and physical therapy enhances independence and help patients with their range of motion and everyday tasks. The nutritional care of patients is a crucial element of disease management. During the early stages of ALS, monitoring of nutritional status, assessment of swallowing, dietary advice, food fortification and provision of oral nutrition supports are all key aspects of nutritional management.

With disease progression, gastrostomy feeding becomes necessary for many patients to help maintain their nutritional status.7

Speech and language therapy can help with communication and swallowing and as the ability to speak deteriorates there are technological resources and apps available to help affected individuals communicate with others. Intermittent positive pressure ventilation (IPPV) or bi-level positive airway pressure (BIPAP) can be used to aid breathing.16

Emotional lability and depression are two distinct conditions affecting some people with MND. Communication and support provided for MND patients and their caregivers, needs to pay attention to concepts of hope, control, and compassion, and how individuals may use these concepts differently to cope with the emotional impact of the disease.17

Earlier this year, Prof Orla Hardiman, Professor of Neurology and Head of the Academic Unit of Neurology at Trinity College and Consultant Neurologist at Beaumont Hospital, Dublin, noted that Ireland, along with other countries in Europe, have committed to a number of exciting new MND clinical trials starting in 2021. “These include trials performed in collaboration with pharmaceutical companies, and trials of drugs that have been selected by our European Clinical Trials Consortium.

The drugs that have been selected work on many different pathways in MND. The sheer number of new drugs ready for clinical trial allow us to be confident that we will make real breakthroughs to treat MND in the near future”.14

Referring to future technologies and advancements in the treatment of MND Prof Hardiman states: “It is axiomatic that future treatments will require a precision medicine based approach, but overcoming the factors that have limited the success of translational medicine will also require novel solutions. ALS/MND is a rare disease, and we now know that it comprises many different subtypes with different pathobiologic mechanisms.

The next step in Ireland is to lead on the development of a system that enables collection and uploading of human data at a very large scale across Europe, delivering a wealth of new multimodal, multisource, clinical phenotype and outcome, imaging, neuro electric signalling, biochemical and genomic datasets that will ultimately help to inform how we categorise each patient.

This in turn will inform how we design and test new treatments using an exciting array of new and
emerging technologies”.