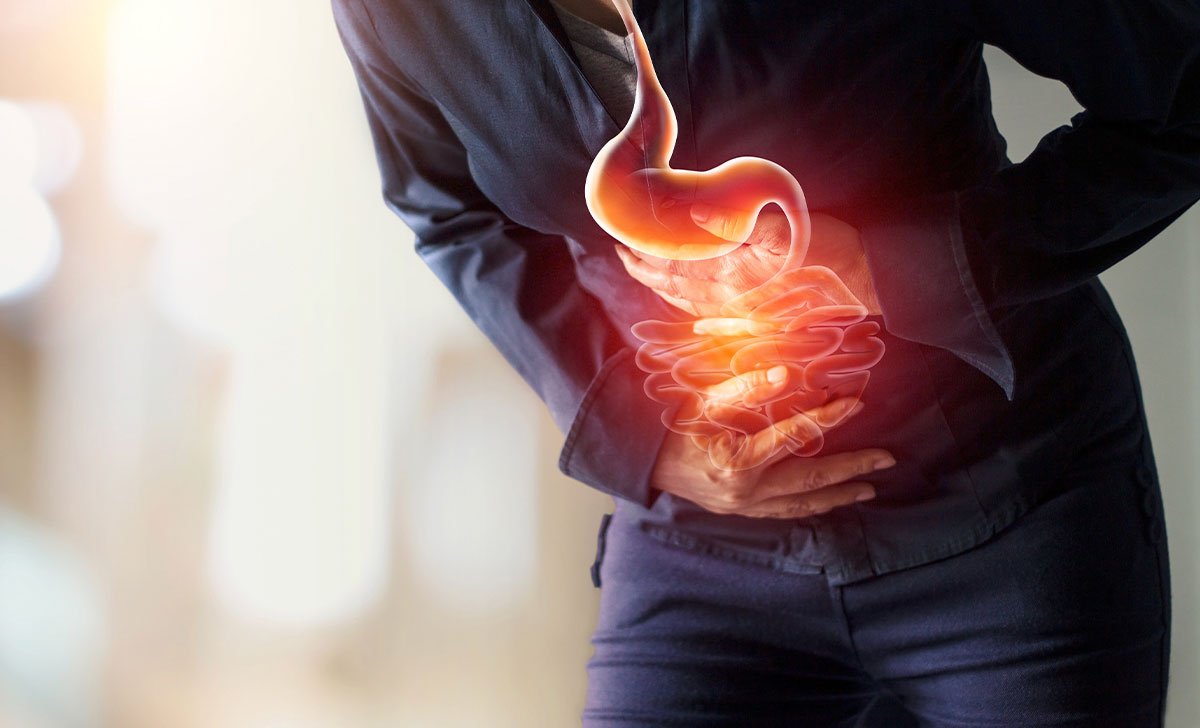 Peptic ulcer disease is a significant source of morbidity and mortality worldwide, with a lifetime risk of development ranging from 5-to-10 per cent

Peptic ulcers are ulcerations exceeding 5mm in diameter that develop in the mucosal lining of the stomach or duodenum, resulting from an imbalance between factors promoting mucosal damage (such as gastric acid, pepsin, Helicobacter pylori (H. pylori) infection and non-steroidal anti-inflammatory drugs (NSAIDs)), and mechanisms promoting gastroduodenal defence, such as prostaglandins, mucus, bicarbonate, and mucosal blood flow. Ulcers smaller than this or without depth are classed as erosions.

Peptic ulcer disease (PUD) is a significant source of morbidity and mortality worldwide with a lifetime risk of development ranging from 5-to-10 per cent. Epidemiological studies, however, have shown a sharp decreasing trend in the past 20-to-30 years in the incidence rates of hospital admissions and mortality associated with the condition, due to improved hygiene, more effective treatments including the widespread use of PPIs, and judicious use of NSAIDs and aspirin.3

The mechanism of PUD results from an imbalance between gastric mucosal protective and destructive factors. In PUD there is usually a defect in the mucosa that extends to or beyond the muscularis mucosa. Once the protective superficial mucosal layer is damaged, the inner layers are susceptible to acidity and the ability of the mucosal cells to secrete bicarbonate is compromised. H. pylori can colonise the gastric mucosa and also impair the secretion of bicarbonate, promoting the development of acidity and gastric metaplasia.1,2

H. pylori, a gram-negative bacillus found within the gastric epithelial cells, is responsible for 90 per cent of duodenal ulcers and 70-to-90 per cent of gastric ulcers. H. pylori causes an inflammatory response with neutrophils, lymphocytes, plasma cells, and

macrophages within the mucosal layer and causes epithelial cell degeneration and injury. H. pylori has a wide spectrum of virulence factors allowing it to adhere to and inflame the gastric mucosa. This results in hypochlorhydria or achlorhydria, leading to gastric ulceration.1 All patients found to have peptic ulcers should be tested for H. pylori.7

NSAID use is the second most common cause of PUD and approximately 25 per cent of regular NSAID users will develop PUD. Aspirin users are also twice as likely to develop peptic ulcers as the general population.7 NSAIDs damage the gastroduodenal mucosa through both systemic and local mechanisms, but the systemic inhibition of cyclooxygenase 1 (COX-1) derived prostaglandins is regarded as the main mechanism. The secretion of prostaglandin normally protects the gastric mucosa. NSAIDs block prostaglandin synthesis by inhibiting the COX-1 enzyme, resulting in decreased gastric mucus and bicarbonate production and a decrease in mucosal blood flow.1 Other medications including corticosteroids, bisphosphonates, potassium chloride, and fluorouracil have been implicated in the aetiology of PUD.3

About a fifth of PUD cases are not related to H. pylori, NSAIDs or aspirin, but the accuracy of this value has been challenged due to false negative H. pylori testing or under reported NSAID use.

Idiopathic PUD may be due to an imbalance

between factors that contribute to mucosal integrity and aggressive insults, including a hyper-secretory status.7

Approximately two-thirds of patients with PUD are asymptomatic. In symptomatic patients, the most common presenting symptom of peptic ulcer disease is epigastric pain, which may be associated with dyspepsia, bloating, abdominal fullness, nausea, or early satiety. Other signs include weight loss/gain, haematemesis and melaena. Signs and symptoms of PUD vary depending upon the age and location of the ulcer. Gastric and duodenal ulcers can be differentiated by the timing of their symptoms in relation to meals. Epigastric pain usually occurs within 15-to-30 minutes following a meal in patients with a gastric ulcer, and two-to-three hours post prandial for patients with a duodenal ulcer. Nocturnal pain is common with duodenal ulcers.1,2 The most common complication of PUD is gastroduodenal bleeding. Perforation is a less frequent, but potentially life-threatening complication. Either of these may be the presenting symptom, particularly in patients taking NSAIDs.5

A detailed history including medication use and lifestyle factors, physical examination, and invasive and non-invasive medical tests are important for an accurate diagnosis of PUD. A careful history should be obtained and noted for the presence of any complications. Any patient presenting with anaemia, melaena, haematemesis or weight loss should be further investigated for complications including bleeding, perforation, or cancer. A physical exam may reveal epigastric abdominal tenderness and signs of anaemia.1,3

Endoscopy is the gold standard for diagnosis of PUD. Although invasive, endoscopy allows for biopsy and includes a variety of methods for testing, such as histology, culture, or rapid urease test. Endoscopy can be used to detect H. pylori and can also rule out malignancy.7 Less invasive options include a H. pylori carbon-13 urea breath test or stool antigen test and a full blood count. The urea breath test has high specificity; however, false-negative results can occur in the case of PPI use.6 Other investigations to consider may include fasting serum gastrin level and urine NSAID screen.4

CT scans can identify non-perforated peptic ulcers. However, many patients will need endoscopy, oesophagogastroduodenoscopy (OGD) for further evaluation. Barium endoscopy is an option for patients with contraindications to OGD.

Once the diagnosis of peptic ulcer disease has been made, it is important to establish the aetiology of the disease as this will help develop a treatment plan for the patient, not only acutely, but also a long-term plan to help prevent a recurrence.6

The treatment plan for peptic ulcers is developed based on the degree of disease noted at diagnosis. Patients who present with complications, including perforation or bleeding, may require surgical intervention. However, the majority of patients are treated with anti-secretory agents to help reduce the amount of acid exposure to the ulcerated region, and in turn, provide symptomatic relief and promote healing. For patients who present with a history of heavy NSAID use, the first step is to advise them to avoid NSAIDs, as this is not only a possible aetiology, but also a cause of worsening symptoms. Smoking and alcohol cessation is also encouraged, as these may exacerbate symptoms.6

Apart from exclusion of malignant disease,

detection of H. pylori infection with histology or rapid urease tests is essential to the subsequent treatment plan.3,4

First-line treatment for H. pylori-induced PUD is a triple regimen comprising two antibiotics and a proton pump inhibitor (PPI) (See Figure 1). PPIs should be avoided two weeks before testing for H. pylori, as they may increase the risk of a false negative result. Antimicrobials should also be avoided for four weeks before testing.5 Due to increasing antibiotic resistance in H. pylori, treatment has become more difficult, and the efficacy of triple therapy has fallen below 70 per cent in many countries.7

Post eradication testing must be carried out at least eight weeks following completion of therapy. In cases where the first-line regimen to eradicate H. pylori infection has failed, a different treatment regimen should be used as second-line.5 With failure of a second-line regimen the patient should be referred to gastroenterology for endoscopy with culture and antimicrobial susceptibility testing, to tailor therapy and increase the

Anti-secretory drugs used for PUP include H2-receptor antagonists and PPIs. PPIs have largely replaced H2 receptor blockers due to their superior healing and efficacy. PPIs block acid production in the stomach, providing relief of symptoms and promote healing. Treatment may be incorporated with calcium supplements as long-term use of PPIs can increase the risk of bone fractures. The duration of PPI therapy varies for patients depending on the presenting symptoms, level of compliance, and the risk of recurrence. The majority of patients, however, do not require long-term anti-secretory therapy following H. pylori treatment, upon confirmation of eradication and if they remain asymptomatic.6

NSAID-induced PUD can be treated by stopping the use of NSAIDs or switching to a lower dose. Corticosteroids, bisphosphonates, and anticoagulants should also be discontinued if possible.1

Surgical treatment for PUD is indicated if the patient is non-compliant, unresponsive to medical treatment, or at high risk of complications. A refractory peptic ulcer is defined as one over 5mm in diameter that does

not heal despite eight-to-12 weeks of PPI therapy. The common causes are persistent H. pylori infection, continued use of NSAIDs, or significant comorbidities that impair ulcer healing or other conditions like gastrinoma or gastric cancer. Surgical options include vagotomy or partial gastrectomy.1

Patient education is very important for those with PUD. It should include information about the primary causes of PUD, dietary advice, practices to avoid, such as NSAID use, and the risk of any interventions offered including the long-term use of PPIs if it is the therapy of choice for symptomatic management.6

Timely diagnosis and treatment of PUD and its sequelae are crucial to minimise associated morbidity and mortality, as is prevention of PUD among patients at high risk, including those infected with H. pylori and users of NSAIDs.2 Identifying the risk factors and mechanisms that lead to the development of PUD helps to understand the approach behind diagnostic and treatment strategies.7 Prognosis for individuals with PUD is very good if the underlying cause is successfully treated. For most people, treatment that targets the underlying cause is effective at eliminating PUD. Recurrence of peptic ulcers, however, is common, but recurrence may be prevented or reduced by maintaining good hygiene, avoiding alcohol, smoking and NSAIDs.

Prof Gisbert provided an overview of eradication therapy and described how this European registry is a large, long-term registry of routine clinical practice by gastroenterologists in Europe, with 30 countries, more than 200 investigators and some 50,000 patients involved.

He gave the attendees a synopsis of a number of studies, one of which showed that prescription of triple-therapies in first-line treatment in Europe has markedly decreased from 50 per cent in 2013, to approximately 30 per cent in 2020.

The prescription of 14-day treatments has significantly increased, while seven-day treatment courses have reduced to practically zero, “which is in line with current guidelines”, said Prof Gisbert.

“All these changes in clinical practice have been associated with an increase in the overall efficacy of eradication therapy of approximately 10 per cent,” said Prof Gisbert.

However, overall, he said “management of H. pylori infection by European gastroenterologists is heterogeneous, suboptimal and discrepant with current recommendations”.

“Only quadruple therapies lasting for at least 10 days are able to achieve more than 90 per cent eradication rates. European recommendations are being slowly and heterogeneously incorporated into routine clinical practice, which has been associated with a corresponding increase in effectiveness.”

Outlining other such studies in which he was involved, Prof Gisbert told the conference that optimised concomitant therapy shows significantly higher cure rates – higher than 90 per cent – compared to triple therapy. “The addition of metronidazole to the standard triple therapy increased eradication rates by 10 per cent, resulting in more mild adverse events, but without impairing compliance with therapy,” he said.

He also outlined the evolution of antibiotic resistance in H. pylori over recent years and told the meeting that while resistance to clarithromycin remained stable, it has been higher than 15 per cent across these years. “This is the threshold that we generally consider as being indicative of high clarithromycin resistance.”

However, metronidazole resistance decreased over this time.

Another study reported by Prof Gisbert looked at the potential to improve overall H. pylori treatment. “Common mistakes include the use of standard triple therapy where it is ineffective, or to prescribe it as eradication therapy for only seven-to-10 days,” said Prof Gisbert.