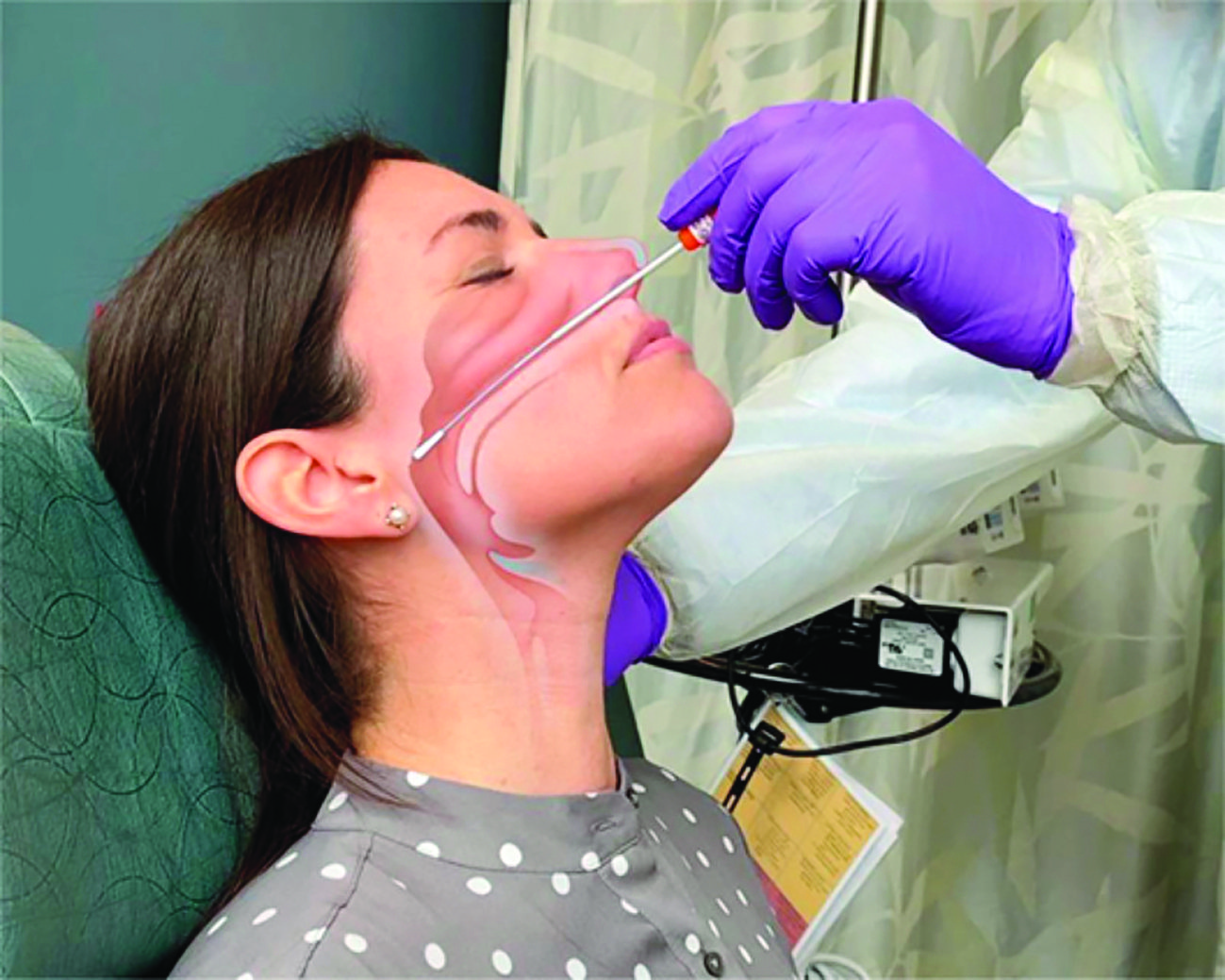 Pathogenicity of a particular virus depends on how a number of factors interact, in particular the number of infectious particles, how they reach the target tissue, the rate of multiplication, the effect of the virus on cell functions,and the host’s immune response. There is significant overlap in aetiology and symptoms of infections, so that even defining the exact syndrome (eg, common cold or influenza-like illness) can be difficult.

The sore throat that results from the common cold is caused by excretion of chemical inflammation mediators (prostaglandins and bradykinin) that stimulate pain nerve endings rather than a true pharyngitis, although cytomegalovirus (CMV) and Epstein–Barr virus (EBV) can cause true pharyngitis (infection and inflammation of the pharynx itself).

Mucosal infection of the lower respiratory tract leads to destruction of epithelial cells, submucosal hyperaemia, oedema of airways, and may cause a degree of haemorrhage; these will result in the clinical syndrome of viral pneumonia. For a pathogen to cause pneumonia, it must reach the alveolar
space and have a large enough inoculum, or overwhelm the host’s already impaired immune system.

Identifying the causative pathogen in viral respiratory tract infections can be problematic. Novel viruses continue to be identified, including bocavirus, WU/KI polyomaviruses, and of course the novel coronavirus, Covid-19. Rapid point of care tests are available, but only for a select few viruses (influenza and respiratory syncytial virus (RSV)), and these are antigen-based. They are less sensitive than laboratory tests. PCR-based testing may be performed as a multiplex panel or individually (influenza, RSV, herpes simplex virus (HSV) and CMV).

This is more sensitive than point of care tests. For viruses that can be shed for prolonged periods (such as bocavirus, rhinoviruses, and some adenoviruses) or are latent and can reactivate (HSV and CMV), it is again more difficult to confirm a causal role. Thus demonstration of increasing viral load by quantitative PCR may be necessary should the pathogenic role of the virus need to be confirmed. Many viruses may be detected via ELISA (rapid antigen testing), but this may not indicate active disease, and these may coexist with bacterial pathogens.

Treatment for viral respiratory infections is usually supportive. Occasionally specific antiviral therapy exists, such as oseltamivir/zanamivir for influenza (given within the first 48 hours, longer if the illness is severe or the patient is immunocompromised) and ribavirin for RSV in immunocompromised patients.

Pleconaril was developed for the common cold, but its side-effects outweighed the benefits. Influenza treatments target neuraminidase, an enzyme of the viral capsid that is required for intercellular viral propagation. Oseltamivir and zanamivir are selective inhibitors of this enzyme and may contain infection during peak viral replication period (the first 24-72 hours), thus improving clinical symptoms and reducing morbidity and mortality.

Particularly within the immunocompromised population, ribavirin has been used also against metapneumovirus, and intravenous acyclovir may be considered for treatment of varicella zoster pneumonia in this population. Antibiotics should not be used as prophylaxis against secondary bacterial infection, with the exception being given to those with chronic lung conditions.

Viruses are the most commonly identified pathogens in severe community-acquired respiratory infections, with 25 per cent of community-acquired pneumonia being viral (this proportion is higher in children due to the large proportion of RSV). It is most common in those at extremes of age and in the immunocompromised. It is also of particular concern during pregnancy due to the increased mortality rate even in otherwise healthy women. It is no longer a diagnosis of exclusion, as identification of the causative pathogen may often be obtained via PCR/ELISA testing. Cultures are gold standard but it may take weeks to get a result.

The US Centers for Disease Control and Prevention (CDC) Etiology of Pneumonia in the Community (EPIC) study found that 23 per cent of hospitalised patients were positive for viruses, and ICU studies identify viruses in 18-41 per cent of patients. A systematic review including over 10,000 patients identified viral infections in 25 per cent of those with community-acquired pneumonia; this number increased to 44 per cent in studies where >50 per cent had a lower respiratory sample obtained.

Viral pneumonia has multiple aetiologies. It may occur with severe measles/varicella or secondary to generalised infection with EBV or CMV. Influenza is the most common cause across the population. Rhinovirus is commonly identified in patients admitted with community-acquired pneumonia, but the significance of this remains unclear. Although there are features suggestive of bacterial versus viral aetiology (adult age group, raid onset of illness, elevated white cell count and neutrophilia are suggestive of bacterial aetiology, whereas interstitial bilateral infiltrates rather than
lobar alveolar infiltrates suggest a viral cause), there is such significant overlap that these features are not clinically useful.

In multiple observational studies of influenza patients, viral testing was infrequently found to alter management. In one study 75 per cent of patients with PCR-confirmed influenza continued to receive antibiotics, and in another over 60 per cent of low-risk patients with a positive rapid viral test continued to receive antibiotics. The clinical significance of a positive respiratory viral test result remains unclear. Rapid tests for biomarkers of bacterial versus viral infection are increasingly being looked to in an attempt to address these issues. These include:

CRP is an acute phase reactant. Its production is stimulated during infection or tissue inflammation, when interleukin-6 (IL-6), interleukin-1b (IL-1b), and tumour necrosis factor-alpha (TNF-a) stimulate hepatocytes to synthesise CRP. CRP levels tend to be much higher in bacterial infections than in those of viral aetiology, and due to its short half-life serial measurements may also be used to ensure appropriate response to therapy.

However, a moderately elevated CRP (10-60mg/l) may also be seen in viral infections (particularly those caused by influenza virus and adenovirus) and as such there is significant overlap between viral and bacterial aetiologies. In systematic reviews it has been found to be neither sufficiently sensitive to rule out nor sufficiently specific to rule in a bacterial cause for an infiltrate on chest x-ray.

CRP peaks between three-to-five days after a viral challenge; thus raised CRP values from viral infection during the first seven days may lead to mistaken prescription of antibiotics. However, CRP may also be more specific for predicting bacterial aetiology after the first week, when elevated levels may suggest secondary bacterial confection.

TRAIL and interferon-gamma-induced-protein-10 (IP-10) have been shown to predict viral infection, particularly in combination. Both are induced in viral infection and suppressed in bacterial infection, thus elevated levels are suggestive of viral aetiology.

Myxovirus resistance genes mx1 and mx2 belong to the class of IFN-stimulated genes that are induced by viruses. After viral infection, IFNs bind with their receptors on the surface of uninfected cells, which activates mx1 and mx2. These then produce antiviral proteins MxA and MxB. The MxA protein is selectively increased in patients with viral infections and
may therefore be useful biomarkers for viral infection.

Viral infections result in an immune response that in particular stimulates T-lymphocytes. Th2 response leads to wheeze and airway inflammation. Post-viral cough is a very common complaint presenting to medical practitioners. It may last three-to-eight weeks, and is the result of the inflammatory response, resulting in bronchial hyper-responsiveness, mucus hypersecretion, and impaired mucociliary clearance. When the larynx is inflamed and hyperreactive, coughing may continue to occur in response to stimuli that would not generally cause coughing (such as cold air).

A spectrum exists between viral-induced post-viral cough and exacerbations of asthma following viral infection. Stimulation of
allergic pathways in susceptible individuals may continue even after the acute viral infection has resolved. Viral respiratory tract infections may cause wheeze in many asthmatics and are the underlying cause for more than half of acute exacerbations of asthma.

Even following a simple rhinovirus infection, allergen-induced production of histamine and late-phase reactions secondary to eosinophil activation may persist for four-to-six weeks. Pure post-viral cough remains a diagnosis of exclusion. Imaging will be normal. Treatment (if required), includes an antihistamine, bronchodilators, and inhaled corticosteroids. Occasionally oral corticosteroids may be trialled.

Multiple viruses exist that may cause a number of syndromes. Diagnosis is usually clinical, although there is an increasing push for a specific diagnosis in order to reduce the use of antibiotics. Significant cross over exists between viral and bacterial aetiologies, and current research is focused on ways to differentiate between the two. Unusual presentations may occur in the immunocompromised. Few treatment options are available other than supportive care. Finally, post-viral cough is common and may present similarly to asthma, although it should resolve completely (but may take several months).