A recap on schizophrenia 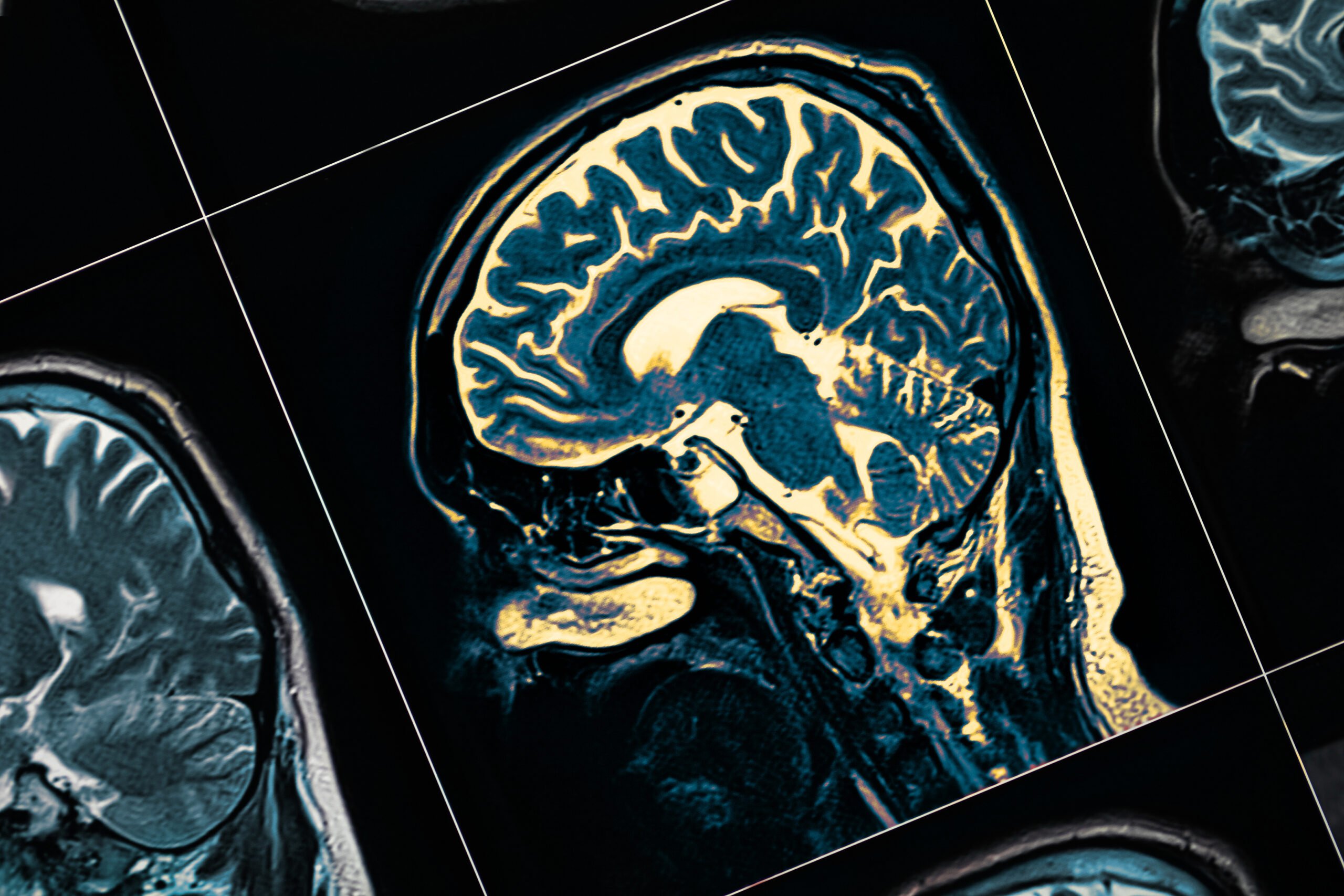 MRI of the patient's head close-up. One picture from the series.

Schizophrenia is characterised by a fundamental distortion in several mental modalities including perception, thought, belief, self-experience, cognition, affect and volition. It carries a lifetime risk of around 1 per cent and presents most commonly in late adolescence to early adulthood.

The incidence in males and females tends to be equal, but onset tends to be earlier in males. For a diagnosis of schizophrenia to be made, the psychosis cannot be attributable to mania or depression, an organic brain disease, or intoxication with or withdrawal from substances.

The causes of schizophrenia have been studied for many decades and appear to encompass several different risk factors including genetics, developmental issues and environmental influences (such as cannabis and other illicit substances). Combinations of genes seem to make individuals more susceptible to developing schizophrenia, with family and twin studies highlighting an increased risk where a first-degree relative has been diagnosed.

But not everyone with these risk factors will develop schizophrenia. Indeed, the ‘stress-vulnerability’ model dictates that increased levels of pressure in everyday life, combined with risk factors, may increase the likelihood of an emerging psychotic episode.

The diagnosis of schizophrenia, using criteria outlined in the World Health Organisation’s (WHO’s) International Classification of Diseases (ICD-10), is based on clinical judgement in the context of a clear understanding of the symptoms comprising specific criteria. Specifically, at least one of (a), (b), (c) or (d) below – or two of (e), (f), (g) or (h) below – must be evident for the diagnostic criteria to be met:

(a) Thought echo, insertion, withdrawal or broadcast;
(b) Delusions of control, impulse or passivity (ie, of being under the control of external forces);
(c) Auditory hallucinations, which are usually running commentary (describing the individual’s behaviour) or third-person (two or more voices discussing the individual among themselves);
(d) Persistent delusions of other kinds, (delusions being fixed, false beliefs that cannot be explained by religious or cultural contexts);
(e) Persistent hallucinations in other modalities;
(f) Thought disorder (where the link between one thought and the next is disrupted);
(g) Catatonic behaviour, such as mutism or posturing;
(h) Negative symptoms, with a change in the quality of an individual’s personal behaviour, which can be remembered as the ‘5As’:

In the ICD-10, the psychotic symptoms must be present most of the time for a period of at least one month. If the symptom criteria are met, but last for less than a month, then schizophrenia should not be diagnosed initially.

The ICD-10 categorises schizophrenia into nine different subtypes – paranoid, hebephrenic, catatonic, undifferentiated, post-schizophrenic depression, residual, simple, other and unspecified however these categories will soon be obsolete as we herald the ICD-11, which is due to be adopted into practice from January 2022.

Here, the subtypes of schizophrenia are to be removed and replaced by groups of dimensional and longitudinal descriptors which allow a more individualised description of the presentation of the illness and its course over a period of time. The symptoms of schizophrenia have generally remained unchanged in the ICD-11, with core symptoms involving persistent hallucinations, persistent delusions, thought disorder and experiences of influence, passivity or control.

A formal diagnosis will require at least two out of a total seven symptoms (one of which must be a core symptom) present for at least one month.

The diagnosis of schizophrenia using the American Psychiatric Association’s Diagnostic and Statistical Manual (DSM-5) differs somewhat, with an individual needing to meet a defined set of criteria in order to receive a diagnosis.

The treatment of schizophrenia, like all other psychiatric disorders, follows a biopsychosocial approach. Treatment in an inpatient setting may be required with the first presentation of a psychotic illness and in more severe presentations, allowing access robust multidisciplinary assessment and a calm environment with limited stimulus.

The UK National Institute for Health and Care Excellence (NICE) guidelines are one among several trusted sets of clinical practice guidelines (CPGs) for the treatment of schizophrenia. NICE recommends offering an oral antipsychotic in the first instance, with patient involvement as much as possible to provide information on efficacy and the potential side-effect profile (noting that this may not always be possible where the presentation is severe).

Antipsychotic medications are divided into first-generation (FGA) and second-generation (SGA) varieties. Many FGAs have been available since the early 1950s and include haloperidol, zuclopenthixol, chlorpromazine and sulpiride.

Clozapine first became available in the 1970s and remains the most efficacious SGA. It is reserved for cases of treatment-resistant schizophrenia due to the potentially fatal side-effect of agranulocytosis, which ultimately quelled its widespread use until a Clozapine Patient Monitoring Service CPMS) was established in the 1990s.

The CPMS regularly monitors the white cell count of every clozapine patient and ensures that it is safe to use. Other potential side-effects include sedation, weight gain, constipation, hypersalivation, cardiomyopathy and seizures.

Both FGAs and SGAs are effective in the treatment of positive symptoms (experiences that are present when they should not be) such as delusions, hallucinations and thought disorder. According to the Maudsley Prescribing Guidelines, there is little evidence favouring either antipsychotic group in the treatment of negative symptoms (experiences that are not there when they should be), such as the 5As. Such symptoms strongly contribute to the poor functional outcome of some individuals with schizophrenia.

However, there is emerging evidence for the use of cariprazine in the treatment of negative symptoms, with initial evidence showing it to be well tolerated. Common side-effects include mild-to-moderate akathisia and Parkinsonism, but there is limited evidence so far of any metabolic side-effect profile.

In general, the lowest possible dose of a single antipsychotic should be used in the first instance. Combinations of antipsychotics should only be considered if there has been inadequate response to individual antipsychotics including clozapine. Patients prescribed an antipsychotic should have regular evaluation of side-effects (for example, using the Glasgow Antipsychotic Side-effect Scale) and frequent monitoring of physical health parameters including vital signs, ECG, weight, and blood tests (lipids, fasting glucose and HbA1c, WCC, U&E, LFTs, and prolactin).

In severe psychosis with agitation in the inpatient setting, a rapid tranquilisation protocol, such as intramuscular olanzapine, lorazepam or combined haloperidol and promethazine, may be needed to reduce acute distress and minimise the risk of harm to self and others.

Psychosocial interventions include the use of cognitive behavioural therapy (CBT) for psychosis, patient and family psycho-education, behavioural family therapy and programmes aimed at promoting longer-term recovery, such as the Wellness Recovery Action Plan (WRAP), to name a few.

Programmes to reduce the duration of untreated psychosis (DUP) have demonstrated that earlier detection improves outcomes. Ultimately, schizophrenia is a relapsing and remitting illness and two-thirds of people experiencing a first episode of psychosis will have further episodes.

Leucht and colleagues (2012) demonstrated that regular antipsychotic medication is protective against relapse in the short-, medium- and long-term. The risk of relapse and poorer outcomes are greater in those with a longer duration of untreated psychosis, a negative attitude towards treatment, a greater burden of side effects and residual symptoms after treatment.

Long-acting injections are a good option for those with frequent relapses due to non- or partial-adherence to oral medication. Ultimately, with the correct tools and approach, it is realistic for an individual with schizophrenia to live a pleasurable and meaningful life.

So what happens to Johnny?

He is admitted voluntarily to his local psychiatric unit and assessed by the admitting doctor who recommends commencing a second-generation antipsychotic. Johnny is initially reluctant and appears sceptical, but soon begins to trust his treating team and ultimately takes the medication.

His symptoms improve and he is offered CBT for psychosis, where he is gently challenged in relation to the delusional beliefs he has in relation to his colleagues. He attends occupational therapy, while family meetings allow for a well-rounded understanding of the challenges he encounters.

Following a period of assessment, he is diagnosed with schizophrenia using the criteria outlined of ICD-10. He is discharged home after six weeks and regularly attends outpatient clinics for review.

He also attends CBT on an outpatient basis. After a few months, he returns to work on a phased basis and reports feeling more comfortable around other people. He plans to commence a master’s degree next year.