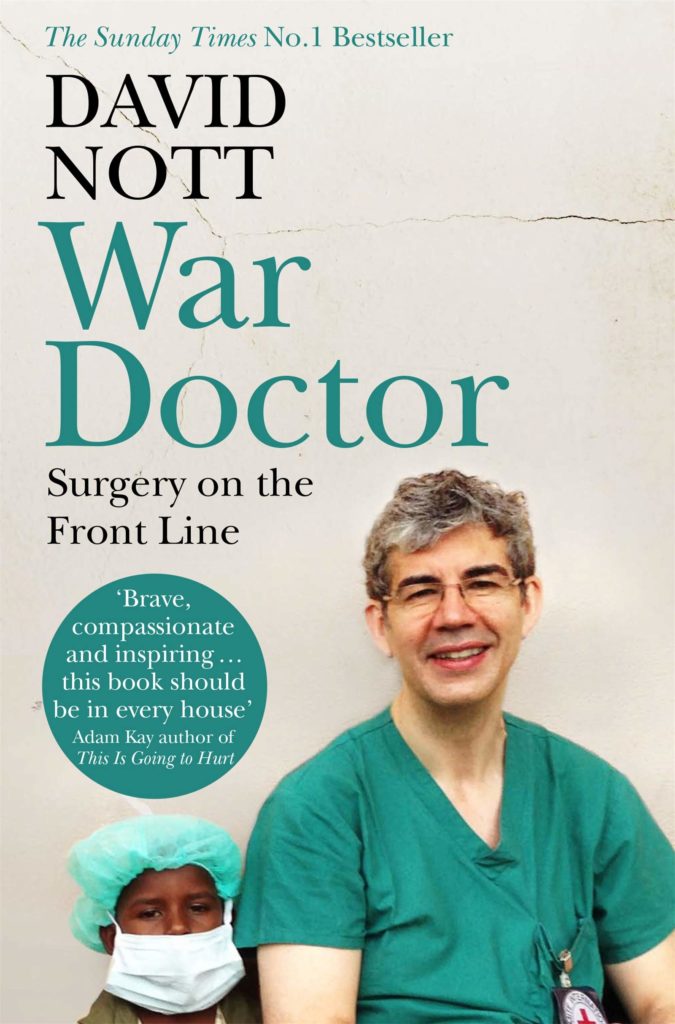 Aleppo, Syria, 2013. Consultant surgeon Mr David Nott is in theatre suturing the pulmonary vein of a wounded patient when six armed men in black combat fatigues burst in: “They were obviously ISIS fighters, and the patient on the table was one of them… It was all I could do to keep my legs from buckling under me.”

For me, Nott’s shocking account of saving an ISIS fighter’s life, having stared down the barrels of several guns, is one of the less frightening episodes described in War Doctor. This is because it was one that I didn’t read through the gaps between my fingers. And it’s no surprise that having described the unremitting surgical challenges faced in near-unendurable conditions “under African skies” in 2005, Nott admits, following the death of a girl aged 13 who had been raped: “I slumped to the ground, holding on to the wheel of her trolley as I sobbed… the work in Chad was becoming almost too much to bear.”

The opening chapter of War Doctor finds Nott in Syria, burning with a Pateresque “gem-like flame” of determination to assert civilised values and save lives while craving “the satisfaction of making a difference, of helping ordinary people; the challenge of self-reliance when working in an austere environment… and the odd bit of danger just to spice things up.” A very “odd bit of danger” arises when he’s removing shrapnel from the leg wound of a woman whose bomb-maker husband had blown up his family. Except the smooth cylindrical object now in Nott’s hands is not shrapnel, but… a detonator, which, he is later told, had it exploded, could have blown his hand off.

War Doctor reveals a complex character whose clear-eyed self-appraisals afford us sweeping views over his psychological landscape, many of whose forbidding features have been wrought by witnessing heart-rendingly traumatic sights that he hesitates — and occasionally declines — to share with the reader. Happily, the love of a good woman helps the physician to heal himself… but that is to get ahead of ourselves.

Brought up by his grandparents in Wales until he was four, when his parents resumed their guardianship, Nott was an only child with few friends — he was also bullied — and a passion for model aeroplanes (today, he is licenced to fly commercial aircraft and helicopters). His A level grades “were awful, and certainly nowhere near good enough to get me a place at university to study medicine”. He tried again and won a place at the University of St Andrews, where during a student party a candle set some curtains alight and Nott was badly burned.

After graduation, two epiphanies — one surgical, one cinematic — launched his career’s humanitarian trajectory. The first came when he performed successful emergency neurosurgery on a rapidly-deteriorating patient whose subdural haematoma had threatened to kill her: “From that moment on, I knew that I wanted to be a surgeon.” Nott’s second epiphany came two years later when he saw a film called The Killing Fields (1984), a depiction of the civil war in Cambodia between government forces and the Communist Khmer Rouge. The film triggered a sense of mission in Nott, “an urge to work in war zones where my surgery could be put to good use in hospitals like the one in the film”.

Christmas 1993 found Nott in Sarajevo working with Médecins Sans Frontières; in 1996 it was Kabul, Afghanistan; in 2007 to Basra, Iraq. Unnervingly, as a near-routine background to his tales of heroic surgery in the foreground are the explosions, shelling and exchanges of gunfire, which even involve bullets flying through the operating theatre. And his expertly-crafted narrative often evokes a sense of excitement typically associated with thrillers. For example, during a tricky exit from Aleppo, Nott and colleagues successfully negotiate the notorious Castello Road and are relaxing in their safe house when they “see about 20 armed men coming towards us, some walking and firing their weapons”. The attack was repelled by the Free Syrian Army, but six months later Nott learned “[t]he fighters were ISIS, and it was their last chance to take me hostage”.

War Doctor is an extraordinary story told by an extraordinary man. Nott married Elly relatively late in life and they have two daughters; he helped establish the Surgical Training for Austere Environments at the Royal College of Surgeons; and “[t]hrough Elly’s diligence and hard work, the David Nott Foundation was awarded charitable status in July 2015”.

Clive James’s review in The Observer (11 May 1986) of Bob Geldof’s Is That It? closes with a sentiment that is more suited to David Nott: “He is a lot like St Vincent de Paul, who could have had a great career in the Church but chose to do Christ’s work instead.”