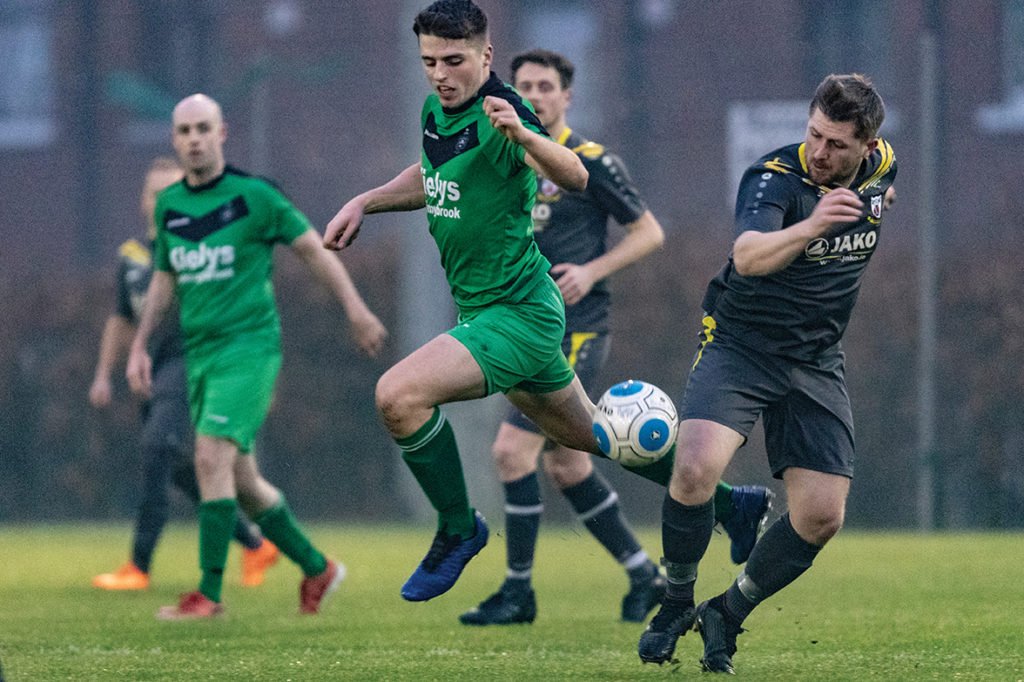 St Vincent’s rose to the occasion and came out worthy winners in a must-win game against Beggsboro AFC. The visiting side dominated proceedings and held a three-goal lead with less than five minutes to play, but had to endure a nerve-wracking close after conceding two late on. Rory Durand bagged a brace, with the other goals coming courtesy of Eddy Wrynn and Mark Dwyer.

Cabra Community College’s fantastic grass surface was a welcome surprise, and favoured the team looking to keep the ball on the ground and play a passing style of football. A few evening showers only helped the ball glide across the surface.

Full-backs Darren McMahon and Kieran Keane defended the flanks well and took every opportunity to bomb up the sidelines. The slick playing surface made it hard for defenders to turn once the forwards played it past them. Aidan McGrath and Eddy Wrynn picked up on this early and consistently beat their markers. Chances came as the pressure mounted. Mark, Aidan and Rory were denied by a number of smart saves from the Beggsboro goalkeeper, but the resistance could only last so long. Darren took his opposite full-back out of the game with a sweet through ball for Aidan to race onto, and his well-saved shot looped up nicely for Eddy to nod home at the back post. 0-1. Confidence high, Vincent’s doubled-up with one of the goals of the season. The defence moved the ball from left to right, and back into John in midfield, who swept a sublime one touch pass into the path of Eddy on the right wing. Eddy lashed a first-time ball across the edge of the six-yard box that was met by Mark with a diving header. Three touches to go 50 yards. Devastating play to make it 0-2 going into the break.

Looking to put the game on ice, Vincent’s roared out of the gates to start the second half. Rory made it a three-goal lead with a crisp strike from the edge of the area when played in down the right. Aidan was wide open at the far post, so Rory needed to hit the back of the net to avoid a dressing-down. Beggsboro got a goal to make it 1-3, but they did not seriously look like getting back into it. Rory once again looked to have sealed victory with a rasping 25-yard free kick that was too powerful for the goalkeeper to handle and found its way into the net. 1-4. What should have been a comfortable end to the game soon turned into a nervous finale. Beggsboro pulled it back to 2-4 with five minutes to play, and then 3-4 not long after. Vincent’s showed spirit to pick themselves up and see out the all-important win, but it was a closer finish than anybody would have liked.

4-3 the final score in favour of the visitors. Although the scoreline certainly flattered Beggsboro, they could have sneaked a draw in the closing stages. The result gives Vincent’s hope of avoiding relegation, and need to win both of their remaining games to make that happen.

Vincent’s threw caution to the wind in this game and backed themselves to outplay their opponents on the ground. This style of football starts at the back, and the team worked the ball well all over the pitch with sharp passing. The work rate was excellent throughout. Players moved constantly, creating space for each other and causing constant problems for the opposition. The result was well-deserved and the final margin should have been much wider. Last-minute jitters made life more difficult than it should have been, though the positives certainly outweighed the negatives.

Rory Durand helped himself to a brace to help the team claim three crucial points. The cardiologist in training put in a complete centre-forward performance, acting as both a target man and a willing runner into the channels. Too fast for defenders in space, and too strong when in close, Rory tormented the Beggsboro defence all evening. Embracing his more advanced role, Rory has been in fantastic form this season and will be looked upon to stay among the goals as the season enters the final stages.

Vincent’s welcomed CIE Ranch to St Benildus on Friday 12 April. CIE won an action-packed encounter in the first meeting between the sides. However, Vincent’s won this vital fixture 2-1, with goals from Fionn Lynch and James Clarke.

Training continues every Wednesday evening until late April, and we are always looking for new faces to get involved. Follow the St Vincent’s Hospital FC Facebook page, or get in contact via email svuhfc@gmail.com.