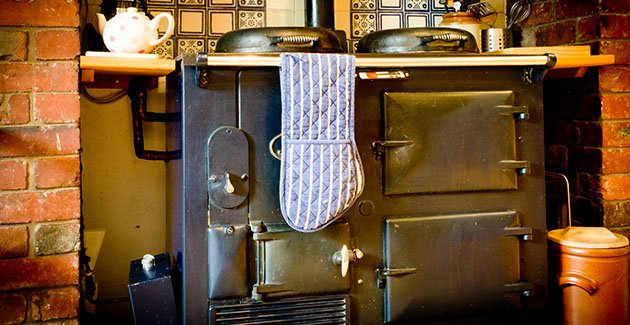 Sitting together for meals is important, especially at this time of year

love my Aga. It heats the house, dries my clothes, and makes the best toast in the world. I love the food it cooks, but you must cook the Aga way. Oven temperatures are fixed, so you move the food from hot to cool oven as needed and the Aga does the rest. Delia Smith taught me how to cook and Mary Berry adjusts recipes for the Aga. I particularly enjoy slow cooked food from the Aga simmering oven.

Recently, I decided to make Delia’s Hungarian goulash for Dublin friends and some family. For dessert, I planned to make an old recipe from Marguerite Patten called “apple brownie” but really it’s a date, apple and walnut pudding and it’s yummy. The dates go sort of toffee-ish and unrecognisable. I don’t like dates, so I was surprised it was so good.

Actually, there are a lot of foods I avoid – since I discovered I have acid reflux. Nothing is banned entirely and I’m always interested when I like a dish that has one of the suspect foods. Maybe if I was brought up eating chili or beans, I’d be able for them, instead of feeling queasy later. When I lived in London, I got used to eating Indian food, but only mild kormas. I wonder if it’s to do with our gut bugs, our microbiome.

Anyway, I choose dishes that suit me and then I adjust the recipes for the Aga. On this occasion, there were a few extra issues to consider.

One of my guests had tricky abdominal surgery and must be aware of gassy foods such as onions, garlic, or brown bread. If not she could land in hospital with a big tube down her nose to relieve an airlock. She still loves tasting new dishes – to the despair of her husband. Meanwhile, he has adopted a “pretend I’m a diabetic” diet and won’t eat added sugar. The Dubliners, mother and son, are not coeliac, but have been eating gluten-free for years.

We’re worse than a bunch of picky toddlers. But it’s okay, I can handle it. I’ve cooked for them all before.

I’ll still make goulash, but without flour because of the gluten-free family. I’ll add extra onion instead, to thicken it a little. But there’s ‘gas lady’ to consider: If the onions are thoroughly cooked, she’ll be safe. And I’d better remove the garlic pieces once they’ve yielded up their flavour. And adjust for the Aga. No problem. Not really.

Dessert is a little awkward, but I can use rice flour. I’ve done that before. Just remember to keep an eye on it, as it’ll burn more easily than with ordinary flour. ‘Pretend I’m a diabetic’ says he’s happy with fruit and cheese, but it seems a bit mean, so I decide to make bread.

‘Gas lady’ has discovered “porridge” bread. Oatmeal is a soluble fibre, so she can’t get airlocks. It’s delicious toasted with marmalade and great with cheese. She uses the Glenisk recipe; I prefer the Cinnamon-Soul blog and I’ve worked out an Aga version. Because I use Kilbeggan oats, which are pretty much free of gluten, the ‘GF family’ love it too.

Just as I’m starting on this menu, there’s a phone call: A vegan friend is added to the party. Hmm. Now I’m in trouble. There’s egg in the dessert and obviously there’s meat in the goulash. Even the bread has an egg in it. She says not to bother about her, but I do.

Personally, I have a sweet tooth; I enjoy making and eating pastry; I like meat and hate beans. I won’t be joining any of them. But I know all these people for years and I also ate Christmas dinner with several of them. Sitting together sharing food is important.

Fortunately, the ‘GF family’ are very creative cooks. After some internet consultation and a quick look around my kitchen, they settle on an aubergine and lentil stew, with chili, all adjusted for an Aga. ‘Vegan’ is delighted. Everyone else is too. I can’t stand lentils, but that’s ok. ‘Gas lady’ is eager to join in and has to be restrained by her anxious husband.

I didn’t want a second person watching us, but what’s a vegan dessert? I have it! I often use Stork margarine for pastry, instead of butter. With Crimson Bramley apples from the garden, the Aga gave us a lovely apple tart. Of course the ‘GFs’ wouldn’t eat it and neither would ‘PIAD’. But that leaves more for the rest of us. We had a lovely evening sitting at the kitchen table, warmed by the Aga.

And it was an ideal preparation for Christmas Dinner!