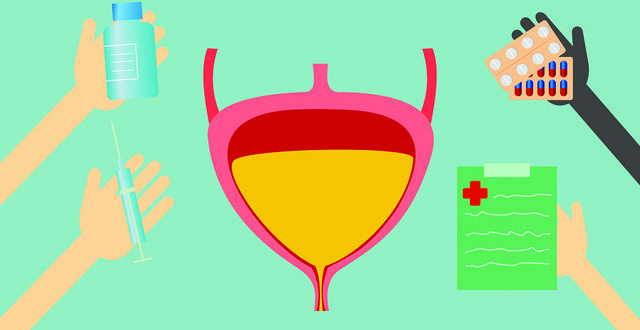 It is estimated that about one-third of the population in Ireland is affected by one or more of the different aspects of incontinence, with the incidence increasing with age, and an estimated 350,000 people over the age of 40 years are affected with overactive bladder (OAB) alone.

The term ‘urinary incontinence’ refers to the complaint of any involuntary loss of urine. Urinary incontinence can be categorised into several distinct subtypes based on associated characteristics and circumstances surrounding episodes of urine leakage. Although defining the type of incontinence will not establish a definitive underlying diagnosis, it will ultimately guide investigation and treatment (see Table 1).

Patients with urinary incontinence can be identified through routine screening, or if the patient initiates a discussion about their urinary symptoms. The initial assessment should help with understanding the type of incontinence, while identifying potentially modifiable contributing factors. Most primary treatment options, such as lifestyle modifications and behavioural treatments, are the same for different types of incontinence.

Should include questions in relation to aggravating factors of urinary loss, onset, duration of symptoms, and degree of bother. Acute symptoms can be related to patterns of fluid intake and output, acute urinary tract infection, or recent surgery or trauma. Chronic symptoms should prompt queries about a history of congenital abnormalities, neurological disease, relevant surgery or general health. A detailed history of medications with known or possible effects on the lower urinary tract should also be obtained.

A bladder diary is recommended in order to document and communicate objective information and observations by the patient during the diary period. Despite the fact that diaries are never completely diagnostic, they may demonstrate both normal and abnormal patterns.

The ideal duration of a bladder diary is not yet clear; the recommended duration is three days for accurate assessment of lower urinary tract symptoms (LUTS). However, a seven-day diary is recommended in atypical clinical patterns.

It is considered standard to do a urinalysis by either a dipstick or sending a mid-stream urine sample at each visit to the clinic.

Secondary investigations include urodynamic testing, a cystoscopy, and imaging of the upper urinary tract. These should be considered in patients with neurological disease, refractory OAB, or those in whom initial investigations raise the suspicion of an underlying problem that may require further evaluation or treatment.

This involves maintaining an adequate intake of 1.5-to-2 litres of fluid per day (six-to-eight cups), decreasing evening fluid intake, in particular when there is nocturia. An important part of this is reducing caffeine intake, present in coffee, tea and green tea, and also reducing other types of fluid that cause irritation to the bladder, such as alcohol, carbonated drinks, citrus, tomato, and spicy food.

Weight loss has been proven to improve both stress and urge incontinence, and it is also recommended to quit smoking and avoid constipation by increasing dietary fibres.

These are aimed at strengthening the pelvic floor musculature. The rehabilitation programmes may include simple oral or written information, exercises performed with biofeedback, pelvic muscle contractions stimulated by functional electrical stimulation (FES), motor relearning exercises, or any combination of the above. Success is dependent on a continuous, regular home exercise programme to avoid deconditioning. Pelvic floor muscle training can also help improve prolapse symptoms and severity. They can also help improve quality-of-life prior to surgery.

The target is increasing the voiding interval and decreasing urgency and associated urge incontinence. The three components to the training are patient education, scheduled voiding, and positive reinforcement.

This should be undertaken in small steps. For example, if the patient is going to the toilet every half an hour, they should try extending the time (or ‘holding on’) by 10 minutes for a week, then by 15 minutes for a week, and then 30 minutes, etc. The aim is to eventually be able to hold on for three-to-four hours between toilet visits.

There are many options of anticholinergic medications to choose from, which are demonstrated in Table 3.

Another relatively new drug used is mirabegron, which is a β3-adrenoreceptor agonist, and because its receptors are more specific to the bladder, it has fewer side-effects. It is considered as a second-line therapy when patients are intolerant to anticholinergics.

Absolute contraindications to anticholinergic use include urinary retention, gastric retention, uncontrolled narrow-angle glaucoma, and known hypersensitivity to the individual drugs or any of their ingredients.

Elderly patients in particular should be monitored for drug interactions or polypharmacy of drugs with anticholinergic effects (ie, antidepressants, antipsychotics, anxiolytics), as the overall anticholinergic load is associated with confusion, falls and fractures. Anticholinergics are category C drugs in pregnancy, to be used only if the benefits clearly outweigh the risk.

Intravesical botulinum toxin A prevents acetylcholine release at the neuromuscular junction, resulting in temporary chemodenervation and muscle relaxation for up to six months. The usual technique is using 100IU of botulinum toxin diluted in 20ml of normal saline, and then injected into a non-trigonal area of the bladder wall in 20 different places.

Complete continence can be achieved in 40-to-80 per cent of patients and bladder capacity improves by 56 per cent for up to six months. Maximal benefit is between two and six weeks, maintained over six months. The injections can be repeated according to degree of improvement or relief of symptoms.

It is important to teach the patient how to do intermittent self-catheterisation beforehand, as the risk for the development of urinary retention is between 10-to-15 per cent.

Other options also include posterior tibial nerve stimulation and sacral nerve stimulation, which involves an implantable electrode in the S3 foramen continuously stimulating the S3 nerve root, in order to stimulate the pudendal nerve. There is a potential benefit for up to five years in patients with OAB.

Pelvic floor muscle training is considered the first-line treatment for urinary incontinence and aims to strengthen the levator ani and pubococcygeal muscles, which affect the urethral closure mechanism.

An incontinence pessary is a silicone ring device with a knob placed in the vagina, with the goal of stabilising the urethra to eliminate hypermobility and increase urethral pressure during increases in intra-abdominal pressure. This is a safe and effective conservative treatment.

Periurethral bulking injections are performed via the urethral route using a cystoscope, and demonstrate highly variable success rates ranging between 26 per cent and 75 per cent.

A wide variety of material can be used; most commonly used is Bulkamid, which is a homogenous hydrophilic gel consisting of 2.5 per cent polyacrylamide and 97.5 per cent water. Bulkamid appears to be a relatively safe and minimally-invasive means of narrowing the lumen of the urethra. It seems to have a positive effect for at least six months to two years, and it is possible to re-inject patients. No material has proved better than another. This appears to be a good option for older, unfit patients, or those who have failed other incontinence treatments.

Through the years, hundreds of different surgical options have been developed for the management of stress incontinence, but nowadays, midurethral slings utilising synthetic mesh remain the gold standard.

The retropubic tension-free vaginal tape sling (TVT) was the first to be introduced. It was developed based on the theory that the tape should substitute the pubourethral ligament that is responsible for the support of the mid-urethra. There is a small risk of perforating the bladder while inserting a TVT, which can be assessed by doing a cystoscopy.

Later on in 2001, the transobturator tape (TOT) sling approach was introduced with the hope of avoiding vascular, bladder, and bowel injuries. TOT sling trocars traverse the obturator canal instead of the retropubic space and enter through small groin incisions at the level of the clitoris bilaterally.

Mesh complications from midurethral slings are uncommon and are reported to be less than 4 per cent but can include mesh erosions into the bladder or urethra, mesh exposures in the vagina, pain, dyspareunia, and rare complications, such as severe infections.