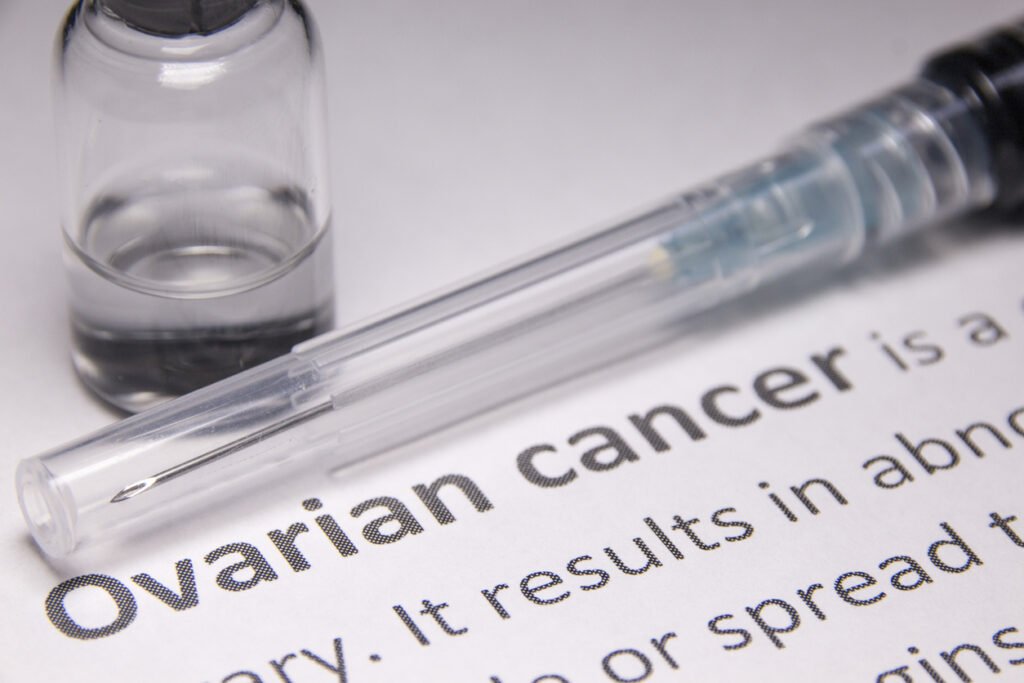 Ovarian cancer is a leading cause of morbidity and mortality among women all over the world. Many patients remain asymptomatic until they develop more advanced disease. Subsequent symptoms can often vary in severity and character making it difficult to diagnose. In Ireland, on average 400 cases of ovarian cancer are diagnosed every year.
The five-year net survival for ovarian cancer ranged from 28-to-47 percent during the period 2010-2014 among 24 EU countries surveyed. The net survival in Ireland increased from 29 percent (2000-2004) to 31 percent (2005-2009) to 33 percent during the period 2010-2014. Ireland ranked poorly for survival, coming 23rd of 24 EU countries surveyed for the period 2010-2014 (33 percent), where the best EU country was Sweden (47 percent). Deaths from cancers of
the ovary ranked fourth in females.

There are no effective screening tests for ovarian cancer at present. Most patients present with advanced stage III or stage IV disease. This limits our ability to cure and can pose challenges to keeping patients in remission. We understand now that there are many different types of ovarian cancer including distinct histological subtypes, different genetic mutations including BRCA 1 and 2, differences in homologous repair enzymes, and unique genomic aberrations appreciated on molecular testing.

Achieving remission is common with surgery and chemotherapy, however, maintaining remission can be challenging and a high rate of recurrence is observed. In recent times maintenance therapy and intraperitoneal therapies have been introduced with improvements in progression-free survival (PFS) and some trials demonstrating overall survival (OS) benefits.

Somatic mutations occur in a single body cell and cannot be inherited. Germline mutations occur in gametes and can be passed onto offspring (every cell in the entire organism will be affected). In the past genetic testing was reserved for patients with a family history and those with high-risk disease. Recent recommendations have included germline and somatic genetic testing for BRCA1 and BRCA2 mutations for all patients with ovarian cancer regardless of age, ethnicity or family history. Multigene-panel testing (using next generation sequencing) can determine potentially harmful mutations in many other genes. Germline testing is performed on blood samples, somatic testing is performed on the tumour tissue.

Approximately 10-to-15 per cent of newly diagnosed ovarian cancer patients will carry a germline mutation and 5-to-10 percent will carry a somatic BRCA mutation.

Many patients with a new diagnosis of ovarian cancer present with advanced stage disease. The mainstay of treatment involves debulking cytoreductive surgery and chemotherapy with carboplatin and taxol. Neo-adjuvant chemotherapy can be used in certain symptomatic patients. Intravenous carboplatin and taxol have been used in weekly regimes. Carboplatin can also be used three-weekly along with weekly taxol. Various routes of administration and regimes have been studied.

Intraperitoneal platinum-based chemotherapy showed survival advantage in some studies. Approximately 80 per cent of patients that receive carboplatin and taxol achieve remission. However, the advanced nature of the disease can make it challenging to maintain remission. Maintenance therapy has been studied extensively over the last decade.
Maintenance drugs that improve PFS have become available recently.

The role of bevacizumab in the maintenance therapy for ovarian cancer

The first drug that gained momentum as maintenance therapy was bevacizumab. Bevacizumab is a monoclonal antibody directed at vascular endothelial growth factor (VEGF). The pivotal trials included GOG 218 and ICON7. In both these studies patients enrolled received a backbone of carboplatin/paclitaxel with or without the addition of
bevacizumab and subsequent maintenance with bevacizumab.

PFS is an end-point in metastatic ovarian cancer as it reflects improvement in symptoms and hence quality-of-life for patients.

The role of PARP inhibitors in
maintenance therapy for ovarian cancer

SOLO-1 studied the PARP inhibitor olaparib in stage III/IV ovarian cancer with a germline or somatic BRCA mutation. Patients in this study had received a backbone of carboplatin and taxol chemotherapy, which achieved complete or partial response. Patients were subsequently randomised to olaparib 300mg BID or placebo. The primary endpoint of the SOLO1 study was PFS. This study showed remarkable results. After three years of follow up, 60.4 per cent of patients in the olaparib group had PFS compared to only 26.9 per cent at three years in the placebo group. This data led to the approval of olaparib as maintenance therapy by regulatory authorities in patients with germline or somatic mutation.

A recent updated five-year follow up analysis of this trial showed that, after five years, 48.3 per cent of patients treated with olaparib had not experienced disease progression and were still living with stable disease versus 20.5 per cent of those taking placebo.

The PRIMA study addressed the question of PARP inhibitor use in all ovarian cancer patients, not just patients with a germline or somatic BRCA mutation. This study looked at a different PARP inhibitor called niraparib. This study allowed all patients with newly diagnosed ovarian cancer at high risk of recurrence after response to first-line platinum-based chemotherapy regardless of germline or somatic mutational status. Patients were randomised to niraparib maintenance or placebo. The primary endpoint again here was PFS. Median PFS was 13.8 months with niraparib compared to 8.2 months with placebo.

The subgroup analysis here was interesting when the data was stratified according to HRD BRCA mutation versus HRD BRCA wildtype as well as homologous recombination proficient patients. This showed the benefit of niraparib in all patients, however, BRCA mutation carriers or HRD patients had a greater magnitude of benefit. Niraparib is approved by the US FDA and was recently reviewed by the National Cancer Control Programme (NCCP) for second-line use.As PARP inhibitors have proven their benefit as maintenance therapy, the question now becomes what is the benefit of PARP inhibitors versus maintenance bevacizumab?

Homologous recombination proficient patients had minimal benefit. This brings forward the question of expanding testing in newly diagnosed ovarian cancer patients to include germline BRCA testing, somatic BRCA testing, and HRD testing. As new options become available the cost of these therapies is always a topic of close scrutiny, however, the companion testing that is required to choose the appropriate therapies is also an area of increasing cost and requires significant expertise.

PARP inhibitors in the management
of recurrent ovarian cancer

In patients that had BRCA wildtype in the recurrent setting, improvements were seen in PFS in Study19, NOVA, and ARIEL3. HRD and homologous recombination proficient patients both benefitted in the NOVA and ARIEL3 subgroups.These studies resulted in the approval of olaparib, niraparib and rucaparib in platinum-sensitive recurrent ovarian cancer. PARP inhibitors require monitoring for potential side-effects. There are some common class-related toxicities as well as some toxicities related to the individual drugs. Nausea, vomiting, fatigue, anaemia, diarrhoea and arthralgia, and neutropaenia can all be observed across the PARP inhibitors.

Niraparib also has thrombocytopaenia as a potential side-effect. Haematological toxicities can be managed with dose modifications. Lower baseline weights and platelet counts can help predict patients that may need dose reduction to prevent thrombocytopenia. Myelodysplastic syndrome leading to acute myeloid leukaemia can be a rare potential side-effect. Olaparib can cause pneumonitis.

Niraparib can cause hypertension or tachycardia. Rucaparib can cause photosensitivity. These are some specific drug related side-effects. The CYP enzymes used for metabolism of PARP-inhibitors can lead to drug interactions.

Immunotherapy, also called checkpoint inhibitor immunotherapy, in ovarian cancer is being studied in advanced disease with varied results. However, there have been no practice-changing trials so far. There is no consistent benefit seen with checkpoint inhibitor immunotherapy in the studied patients and immunotherapies are currently not approved for the treatment of ovarian cancer. Cancer vaccines have been studied for several decades, but still haven’t shown benefit in clinical practice.

Cancer vaccines use an immunotherapeutic agent, usually a tumoural antigen, that stimulates an immune response (T-cells) directed against specific malignant cells. Among antigens possibly involved for immunotherapy in ovarian cancer, the cancer-testis (CT) family is quite wide and includes the NY-ESO-1. Several trials evaluating an NY-ESO-1– based vaccine have been conducted in the treatment of epithelial ovarian cancer in different schedules. Data from these trials showed a favourable efficacy, with an improved OS of at least two years in case of vaccination, in both newly diagnosed or recurrent ovarian cancer.

Radiological imaging can be used to stage disease, however, in order to track the disease in real time biomarkers can be used. Ca125 is a marker that can often be used in monitoring disease. This is not raised in all patients and can make tracking progress challenging. New studies are evaluating novel biomarkers. These can include circulating tumour cells and circulating tumour DNA. These new biomarkers are currently being studied in new trials, however, these remain to be utilised widely and lack specific validation and approval to date. The advantage of such biomarkers is that they
are relatively non-invasive and can be processed from blood samples.

Ovarian cancer remains challenging due to its late presentation and high risk of recurrence. There are multiple modalities of management available for treatment in 2021. The use of genetic testing and next generation sequencing helps us better characterise patients and stratify them to appropriate treatment. With the availability of new classes of
medications such as the PARP inhibitors it is important to familiarise medical teams with the adverse events and toxicities associated with the different medications.

Several of the studies discussed here assessed PFS as an endpoint. PFS should be considered by regulatory authorities when considering approval and reimbursement of new therapies. This is an important endpoint in metastatic ovarian cancer. Delaying tumour progression not only incurs clinical benefit, but also has a role in improving the patient’s quality-of-life. We also have to consider possible toxicities when evaluating quality-of-life, however. Patients’ quality-of-life should be considered when choosing treatment options as this helps improve survivorship outcomes.