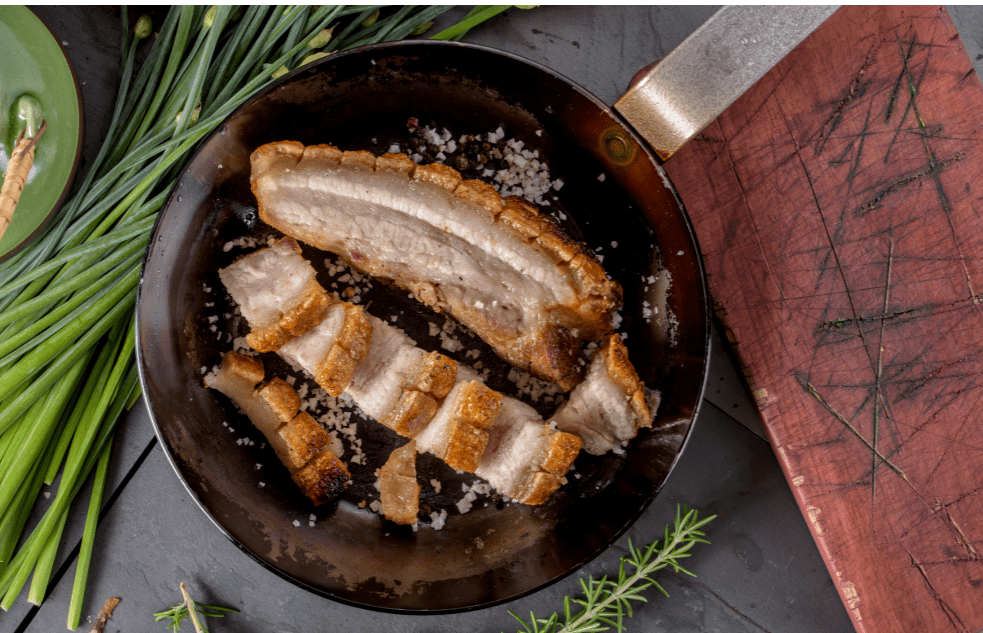 It’s now over 10 years ago when restaurants, reacting to the global financial crisis, started to pretend that slow-cooked pork belly is posh. And despite its subsequent ubiquity, it’s still pretty cheap. Unfashionable cuts of meat, like pork belly, which is otherwise destined to be turned into streaky bacon, are the saviours of restaurants that struggle to produce a cheap menu. Ham hocks become terrines, oxtails become stews, stringy bits of adolescent lambs become fragrant casseroles. Just look at the basic set menus in rural restaurants in Europe. The timid home cook may well think that using anything less than chicken breasts or sirloin steak requires years of training and culinary skill. Nonsense. This is the stuff that sustained our forebears.

Way back in the 17th century, King Henry IV of France expressed the hope for his people that there would be “a chicken in every pot” and the US Republican party said the same thing in 1929 (throwing in an automobile in every backyard for good measure). Clearly a chicken was a bit of a luxury – and it was the same even in my 1960s childhood. Nowadays, whole chickens are sold for frighteningly small sums and there are so many chicken breasts on the supermarket shelves you have to wonder where the rest of the animals go.

Before Irish pig production was turned into an intensive indoor industry, most country people fattened a pig through the year, feeding it scraps, and vegetable peelings, and windfall apples. It would be killed in the autumn; some of it would be eaten fresh and lot of the meat would be salted for bacon and ham to keep. The tradition goes on in parts of France and Spain where they boast that they use every part of the animal “except the squeak”.

In just a generation or so, we found ourselves eating only the expensive bits: The fillet, the legs, the loin chops, turning up our newly urbanised noses at anything more earthy. Perhaps this is part of the collective hangover from the Great Famine; maybe we don’t like to be reminded of hard times?

While food has never been so cheap and while we have never spent proportionally less of our income on food, or time preparing it, most of us are spending more than we need to. And this is because we are addicted to the more respectable cuts of meat, the convenience of processed or prepared foods, and, of course, waste. We buy far too much food.

Frugality in food is not just a way of saving money, it’s also a way of eating better. The simple fact is that many of the great dishes of the world are, essentially, the food of the poor. Or of the thrifty. Most of them involve something for which we have lost our appetite: Long, slow, gentle cooking.

This is the age of the stir-fry, the dish that can be thrown together in minutes and eaten with a fork in front of the television. And that’s not going to work with frugal food.

Shin beef and beef cheeks start out as tough as shoe leather, but they have fantastic flavour and a certain amount of gelatine, which gives a lovely sheen to a casserole. That is provided you cook it slowly for two-to-three hours. But it can be hard to find, and I’ve never seen it in a supermarket. And most butchers turn it into mince, so you may have to ask.

Lap of lamb is that thin flap of meat that was once the animal’s abdomen and it’s the only bit of lamb that can claim to be cheap. All you have to do is to spread the surface of the meat with a mixture of stale breadcrumbs, herbs and garlic moistened with some milk, roll it up and roast it slowly for about an hour and a half. The fat will have melted and drained away and you’re left with a lovely crisp, but succulent roast. That will comfortably feed two hungry people.

Rillettes of pork are vastly popular in France, so why not here? Perhaps it has something to do with the ridiculous demonisation of good, unprocessed fat, which comprises at least half of good rillettes. A rillettes is, simply, pork cooked with sea salt, black pepper, and a bay leaf or two until it’s very tender and can be pulled into strands, put into little pots and topped with its own fat. You simply spread it on toast or crusty bread and eat it, the French manner, with some crunchy, sharp cornichons.

All you need is a piece of belly pork without any rind. Cut it into chunks, put it in a pan, and then into the oven. Add plenty of crushed black pepper, a bay leaf or two and some salt, plus enough water just to cover the bottom of the pan. Put on the heat and when the water starts to boil put the lid on and transfer to the oven. Cook at gas mark 2/150ºC for two hours or until the meat is very, very tender and most of the fat has melted. Now pull the meat apart with a couple of forks so that you have a mass of strands. Spoon these into small jars or ramekins and pour over the molten fat to form a generous layer on top. Set aside to cool and store in the fridge. Use within a week or freeze.

To be properly frugal, you could always cook something else in the oven with your rillettes and I’d suggest a proper Bolognese ragù – not the usual travesty that comes under this much abused name. And remember, as the late Paolo Tullio used to say, it’s a meat sauce with a little tomato, not the other way round. Cooked at a low heat in a casserole for two or three hours, it’s transformed. I often put ours in the bottom oven of the Aga for most of the day.

There’s nothing frugal with my wine choice this month, although I agree that it’s quite amazingly affordable. Bekaa Valley Édition Limitée 2019 (€10.99, Aldi) is an absolute steal, very French in style, certainly containing Cabernet Sauvignon and, I’m guessing, some Syrah. In a sense, it’s like a red Bordeaux that has been subtly turbocharged. It cries out for red meat but, if flesh is not your thing, I’d suggest something suitably spiced in the way of aubergine. I had to pinch myself when I realised the price!