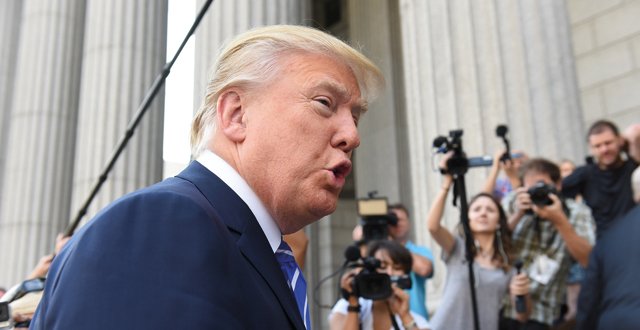 For those who doubt that this could ever happen, just remember that not so long ago, a B-list actor was the main man in the White House and an equally hammy thespian was the Governor of California, which, if it were a country, would have the eighth-largest economy in the world. He’ll be back.

Trump has some ‘interesting’ policy ideas, not least in the area of healthcare. He has publicly and repeatedly linked autism to childhood vaccines and once opined: “Autism has become an epidemic. It has gotten totally out of control. I am totally in favour of vaccines. But I want smaller doses over a longer period of time.

“You take this little baby, and you pump — I mean, it looks like it’s meant for a horse, not for a child. Just the other day, a two-year-old child went to have the vaccine, and got a fever; now is autistic. I’m in favour of vaccines, do them over a longer period of time, same amount. And I think you’re going to see a big impact on autism.”

During a court case, when an opposing lawyer asked for a medical break to pump breast milk for her three-month-old daughter, Trump simply declared: “You’re disgusting.”

The list of quotable Trump musings is almost endless and includes this gem: “It’s freezing and snowing in New York — we need global warming!”

As usual, there’s an app for that — the Donald Trump ‘insult generator’. If you ever feel over-appreciated, simply download it, enter your name and the app takes insults from Trump’s Twitter feed and personalises them for your pleasure.

He describes himself as a ‘liberal’ when it comes to healthcare and is on record as saying that the Affordable Care Act has “gotta go” and that he would repeal the law and replace it with “something terrific”.  He added that he would “work out some sort of a really smart deal with hospitals across the country” to provide care for underprivileged Americans.

Clearly, the US health system is far from perfect as it stands but powerful vested interests mean that it would be a hell of a job to reform it, as the current President has realised with his Obamacare struggles. Perhaps rather than reform, the US system needs to be torn-down and rebuilt from scratch and for this, maybe Trump is the man for the job — he makes Michael O’Leary look like the Flying Nun.

Assuming he ever laughs, Putin must be having a right giggle at the prospect of Trump in the Big Chair.

On the subject of Putin, may I offer my congratulations to the team of neurologists who received research support to watch YouTube videos.

The cause of Putin’s distinctive walk — with a pronounced, unilaterally-reduced arm-swing — has been debated by neurologists and movement disorder specialists. Theories that have been postulated range from shoulder pathology, stroke, Erb’s palsy and early manifestations of Parkinson’s disease.

However, the team from the Radboud University Medical Centre in the Netherlands reckon they have cracked the case and have coined the term ‘Gunslinger’s Gait’. Studying hours of YouTube footage, they found that Putin — along with at least four other top-level Russian officials, including the current President Medvedev — all have the same distinctive walk.

The walking style, the authors say, originates from years of KGB training.

In their conclusion in the BMJ, they state: “We propose that this new gait pattern, which we term ‘Gunslinger’s Gait,’ may result from a behavioural adaptation, possibly triggered by KGB or other forms of weapons training where trainees are taught to keep their right hand close to the chest while walking, allowing them to quickly draw a gun when faced with a foe.

“This should be included in the differential diagnosis of a unilaterally reduced arm swing.”

Lest we think Trump invented the concept of outrageous and bombastic quotes, here are a few gems from former US Presidents of yesteryear that might surprise you.