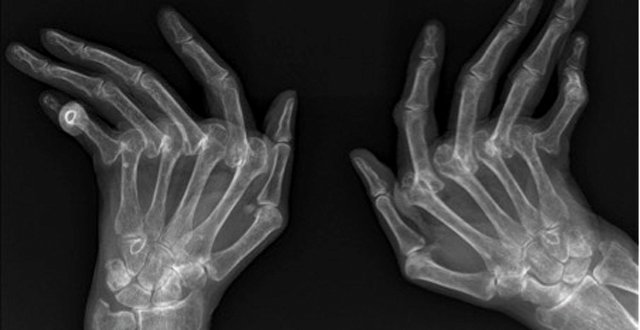 A 35-year-old man was referred by his GP to a rheumatology unit with history of fingers, wrists, ankles and toes pain for three months. The pain was associated with early-morning stiffness lasting approximately two hours. He was given a short tapering course of steroids by his GP, with a marked improvement in his symptoms.

A diagnosis of rheumatoid arthritis (RA) was made based on clinical and radiological findings, supported by laboratory tests.

The patient started treatment on methotrexate, a synthetic disease-modifying anti-rheumatic drug (sDMARD) 10mg once weekly, with the dose gradually increased to 20mg, along with folic acid 5mg.  As he was very symptomatic and as it would take several weeks for the methotrexate to take effect, a short course of oral corticosteroids was also prescribed at the start of therapy. He was reassessed three months later, where his symptoms had completely resolved and he continues follow up with regular blood monitoring.

RA is a symmetric, inflammatory, peripheral polyarthritis of unknown aetiology. It typically leads to deformity through the stretching of tendons and ligaments and destruction of joints through the erosion of cartilage and bone. If it is untreated or unresponsive to therapy, inflammation and joint destruction lead to loss of physical function and inability to carry out daily tasks of living.

RA most typically presents as polyarticular disease and with a gradual onset, but some patients can present with acute onset, with intermittent or migratory joint involvement or with monoarticular disease.

The symptoms of RA can affect the patient’s capacity to perform the activities of daily living (eg, walking, climbing stairs, dressing, use of a toilet, getting up from a chair, opening jars and doors, typing), the type of job they have, and their ability to do their job.

Systemic symptoms may also be present in these patients; in up to one-third of patients, the acute onset of polyarthritis is associated with prominent myalgia, fatigue, low-grade fever, weight loss and depression. Less often, extra-articular manifestations such as nodules or episcleritis may also be present.

Typical ‘classic’ RA: The disease onset in RA is usually insidious, with the predominant symptoms being pain, stiffness (especially morning stiffness) and swelling of many joints.

Mono-arthritis: Persistent, single-joint arthritis (mono-arthritis), frequently of a large joint such as the wrist, knee, shoulder, hip, or ankle, may be the sole manifestation of RA or may herald the onset of polyarticular disease. There may be a history of joint trauma as an apparent initiating event. The interval between mono-arthritis and polyarthritis may extend from days to several weeks in patients whose disease progresses.

Extra-articular involvement: A proportion of patients complain of a constellation of persistent non-articular symptoms, which may antedate the onset of polyarthritis by many months; these include generalised aching, stiffness, symptoms of bilateral carpal tunnel syndrome, weight loss, depression and fatigue (the last simulating chronic fatigue syndrome).

Occasionally, patients present with extensor tendon rupture, most commonly affecting the thumb or little or ring fingers of either hand. The nails and fingertips may show evidence of digital infarcts in patients with rheumatoid vasculitis

Joint pain and swelling, especially of the small joints of the hands, wrist and forefoot are common, along with morning stiffness and decreased grip strength, although all peripheral joints and, to a lesser degree, the more proximal joints of the extremities can be affected. The axial skeleton is usually spared, other than the cervical spine, where severe disease may cause serious neurologic compromise, generally in patients with long-standing disease.

Symptoms and findings of systemic and non-articular manifestations may include generalised aching, stiffness, weight loss, depression and fatigue.

The key features of early rheumatoid inflammation are pain and swelling of the affected joints. Painful inflammation is demonstrated either by local tenderness from pressure applied on the joint or by pain on moving the joint.

Swelling may be due to synovial hypertrophy or effusion. Synovial thickening is detected by a ‘boggy’ feel to a swollen joint, and effusion by demonstrating fluctuance.

Heat and redness are not prominent features of RA, although an involved joint is often perceptibly warmer on careful examination. Synovitis of the wrist may present as carpal tunnel syndrome even in very early disease, when swelling may not be particularly evident.

The characteristic joint deformities are late manifestations of disease that result from the physical stresses and damage to the local anatomy of involved joints.

Symmetrical involvement of joints is a characteristic feature, although this may be less apparent early in the disease. The severity of joint disease and consequent deformity is sometimes notably asymmetrical, an observation that may be attributed to increased structural damage to joints related to unilateral overuse of a dominant limb, or joint protection of a limb resulting from neurologic disease. Squeeze tenderness at the MCP and MTP joints and palpable synovial thickening at these joints are characteristic of RA.

The main signs of disease can often be found in the hands early in the course of RA. Symmetrical effusions and soft tissue swelling around the MCP and PIP joints typically occur. These joints are tender to the touch and exhibit a restricted range of movement. Reduced grip strength is a sensitive but non-specific feature of disease activity affecting the hands and wrists. Occasionally, thickening of the flexor tendons can be detected by palpation of the palm; this finding is due to synovitis of the tendon sheaths (‘tenosynovitis’). Nodules may form along the palmar tendon sheaths, resulting in the tendon sheath catching (or triggering) and inability to fully extend the finger. The nodules may cause tendon rupture, especially of the extensor pollicis longus (extensor of the distal interphalangeal (DIP) joint of the thumb).

The characteristic joint deformities appear in more established chronic RA. These findings include ulnar deviation or ‘ulnar drift’, swan neck and Boutonniere deformities of the fingers, and the ‘bow string’ sign (prominence of the tendons in the extensor compartment of the hand). See Figures 1 and 2.

Occasionally, patients present with extensor tendon rupture, most commonly affecting the thumb or little or ring fingers of either hand. The nails and fingertips may show evidence of digital infarcts in patients with rheumatoid vasculitis.

All of the upper extremity joints may be involved in RA, including the wrists, usually early in the disease course, as well as the elbows and shoulders.

Lower extremity joints are often involved in RA, particularly in the forefoot and ankles; the knees and hips may also be affected, but hip involvement tends to occur in more severe or long-standing disease. Synovitis in the knee may predispose to the development of popliteal (Baker’s) cysts.

Cervical spine involvement is relatively common in RA, especially in long-standing disease, compared with the very infrequent involvement that occurs in the thoracolumbar spine or sacroiliac joints. Symptoms of pain and stiffness in the neck are the most typical manifestation, but disease affecting the joints of the cervical spine can be of critical clinical importance, as long-standing disease may lead to instability and cause symptoms related to subluxation such as neck pain, stiffness and radicular pain.

A number of abnormalities are present in the blood and synovial fluid of patients with RA that reflect the presence of systemic and intra-articular inflammation and the autoimmune features of the disorder. These include inflammatory joint fluid, anaemia of chronic inflammation, the presence of RF and anti-citrullinated peptide/protein antibodies (ACPA), and evidence of an acute phase response that tends to correlate with the degree of disease activity.

Plain film radiography: Plain radiographs are often normal early in disease and the early changes evident on plain films may include only soft tissue swelling and periarticular osteopaenia.

To be detected by plain radiography, erosions must have eroded through the cortex of the bone around the margins of the joint.

MRI: MRI is more sensitive than radiography for the detection of changes resulting from synovitis, but additional research is ongoing to determine the prognostic importance of changes observed with these studies that are not evident radiographically.

Ultrasonography (US): US is another sensitive alternative imaging technique for estimating the degree of inflammation and the volume of inflamed tissue. US finds features of inflammation in joints that are neither tender nor swollen on physical examination.

The treatment of RA is directed toward the control of synovitis and the prevention of joint injury. The choice of therapies depends upon several factors, including the severity of disease activity when therapy is initiated and the response of the patient to prior therapeutic interventions.

Common principles that guide management strategies and the choice of agents have been derived from an increased understanding of the disease and from evidence from clinical trials and other studies. These strategies include approaches directed at achieving remission or low disease activity by more rapid and sustained control of inflammation and by the institution of DMARD therapy early in the disease course.

There are a number of pharmacological agents that can be used to treat RA. The choice of initial drug therapy depends in large part upon the degree of disease activity.

Steroids. Corticosteroid medications, such as prednisone, reduce inflammation and pain and slow joint damage. Side-effects may include thinning of bones, weight gain and diabetes. Doctors often prescribe a corticosteroid to relieve acute symptoms, with the goal of gradually tapering off the medication.

Synthetic DMARDs. These drugs can slow the progression of RA and save the joints and other tissues from permanent damage. Common DMARDs include methotrexate, leflunomide, hydroxychloroquine and sulfasalazine. Side-effects vary but may include liver damage, bone marrow suppression and severe lung infections.

Biologic DMARD agents. This newer class of DMARDs includes etanercept, adalimumab, certolizumab, golimumab, infliximab, rituximab, abatacept and tocolizumab. These drugs can target parts of the immune system that trigger inflammation, which cause joint and tissue damage. These types of drugs also increase the risk of infections, especially TB with a TNF inhibitor.

If medications fail to prevent or slow joint damage, then surgery is considered to repair damaged joints. Surgery may help restore the ability to use joints and it can also reduce pain and correct deformities. RA surgery may involve one or more of the following procedures: total joint replacement, tendon repair and joint fusion.

Other important steps in the management of RA patients include: (a) patient education; (b) exercise and physical and occupational therapy; (c) addressing risks of cardiovascular disease, including smoking cessation, and of osteoporosis; and (d) immunisations to decrease risk of infectious complications of immunosuppressive therapies.