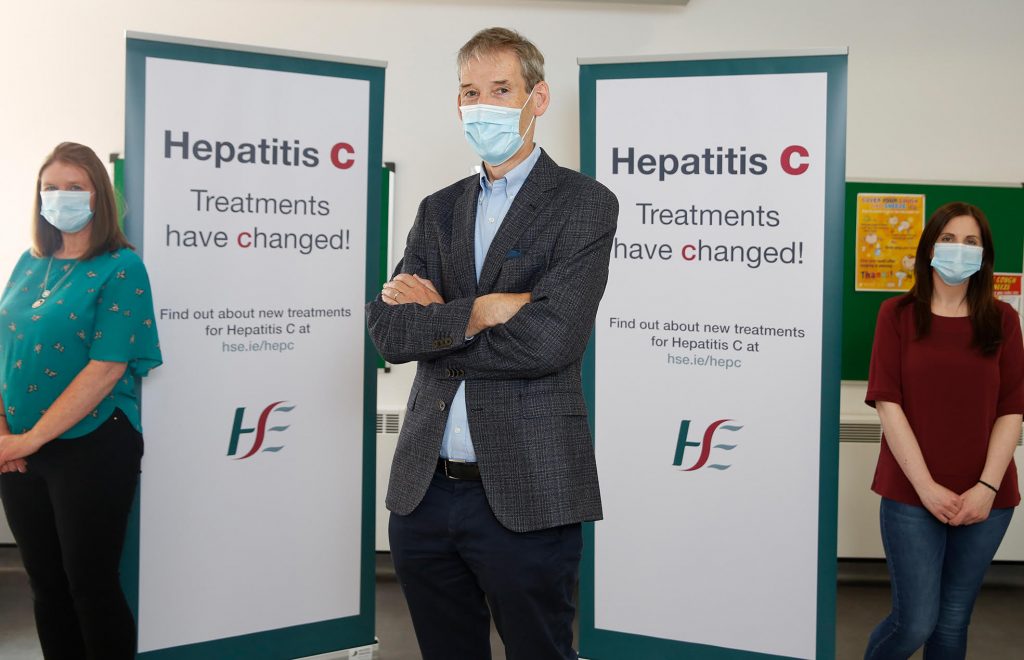 Pictured above: Prof Aiden McCormick, HSE National Hepatitis C Treatment Programme, with nurses Ms Jean Flanagan and Ms Caroline Tallon at the Summerhill Inclusion Health Hub in North Inner City Dublin to mark World Hepatitis Day (28 July). The Programme is highlighting the new advancements in treatment for hepatitis C and is encouraging people who think they may have been at risk to get tested. Hepatitis C treatment services remain open around the country.  More information on at-risk groups, supports, including where to get tested, can be found at www.hse.ie/hepc Credit: Leon Farrell/Photocall Ireland

It is encouraging that despite increased testing, the number of new cases identified is falling.

Ireland has significant inward migration and data from the Health Protection Surveillance Centre (HPSC) suggests that at least 20 per cent of newly-identified infections were probably acquired outside of Ireland. These need to be taken into account in evaluating elimination goals, as we have no way of preventing these infections.

Using data on net immigration to Ireland from the Central Statistics Office, conservative estimates of viral prevalence in countries of origin would suggest that there are approximately 100 imported cases annually. These figures may vary from year-to-year, depending on economic circumstances, but would tally with the HPSC findings.

Figure 1 shows annual new HCV notifications in Ireland. The WHO targets consider 2015 as a baseline. Ireland had 671 notifications in 2015. Allowing for an average of 100 imported cases, this would give an interim target of 569 cases for 2020 and 234 cases for 2030. From the graph, it can be seen that Ireland has achieved the target for 2020. We have extrapolated notification rates out to 2030 using three estimates — the historical 6.5 per cent annual decline; the accelerated 19.5 per cent decline seen in 2019; and an intermediate rate of -10 per cent. In all three scenarios, Ireland achieves the target by 2030.

According to Hospital Inpatient Enquiry (HIPE) data on the number of cases where hepatitis C was the principal diagnosis on discharge from hospital, between 2014 and 2015, there was a marked and sustained fall. This is probably in part due to changes in diagnosis and treatment, with fewer liver biopsies performed and less interferon and ribavirin-related side-effects.

The data presented above suggests Ireland has reached the 2020 targets and is on track to achieve the 2030 WHO elimination targets. However, major challenges remain. The numbers presenting for treatment to hospital-based clinics are falling. For a variety of reasons, many patients will not attend hospital clinics. In view of this, the National Hepatitis C Treatment Programme (NHCTP) has prioritised moving treatment services into the community.

A number of committed clinicians, nurses and pharmacists have established very successful treatment services in the opioid substitution service. Client engagement has been high, with excellent treatment compliance and cure rates equivalent to those achieved in the hospitals. In 2019, a pilot treatment project was established for methadone-prescribing general practitioners and community pharmacies. Numbers treated are small as yet, but there is a lot of interest and the programme is being extended throughout the country. Treatment is also available in the Irish Prison Service. This is co-ordinated by the hepatology service in St James’s Hospital. Currently, it is limited to prisons in Leinster, but hopefully this will be expanded shortly.

One of the major difficulties in eradicating hepatitis C is that significant numbers of patients are unaware of their infection and remain undiagnosed. Thus, it is important that healthcare providers screen individuals with risk factors.

It is particularly important to screen individuals previously exposed to intravenous drugs, contaminated blood products or who come from a country with a high prevalence. Eradication of hepatitis C also requires other health measures, including drug treatment services, opioid substitution therapy, needle exchange, etc. Drug therapy cures HCV infection, but does not prevent re-infection. Annual viral screening is recommended for patients/clients who continue to be exposed to unsafe needle injection.

The aim of the WHO elimination goals is to make hepatitis C a rare disease by 2030. The European Union defines a rare disease as a condition with a population prevalence of 5 per 10,000 individuals or less. To determine whether Ireland has achieved that goal would require a more structured approach. We believe a formal epidemiological study is required, at this point, to determine the population prevalence of active infection. Such a study would facilitate evidence-based screening programmes.

The study could be repeated at five-yearly intervals to provide robust evidence that eradication goals are being achieved. These studies could be performed in collaboration with the National Hepatitis C Treatment Registry, the National Virus Reference Laboratory and the HPSC.

Ireland has achieved the interim WHO elimination targets for 2020. It appears to be on target to achieve the 2030 elimination targets. More robust metrics will be required to confirm we are achieving this. The targets will only be achieved if we can identify the majority of infected patients in the country, which requires buy-in from all healthcare providers. Eradication will also require intensification of public health preventative measures, including needle exchange, etc, to prevent new infections and re-infections. It is a goal which can and should be achieved in Ireland.

Further data referenced in this article is available from the NHCTP, HSE.

Any GPs wishing to become involved in treatment should contact the NHCTP at nhctp@hse.ie