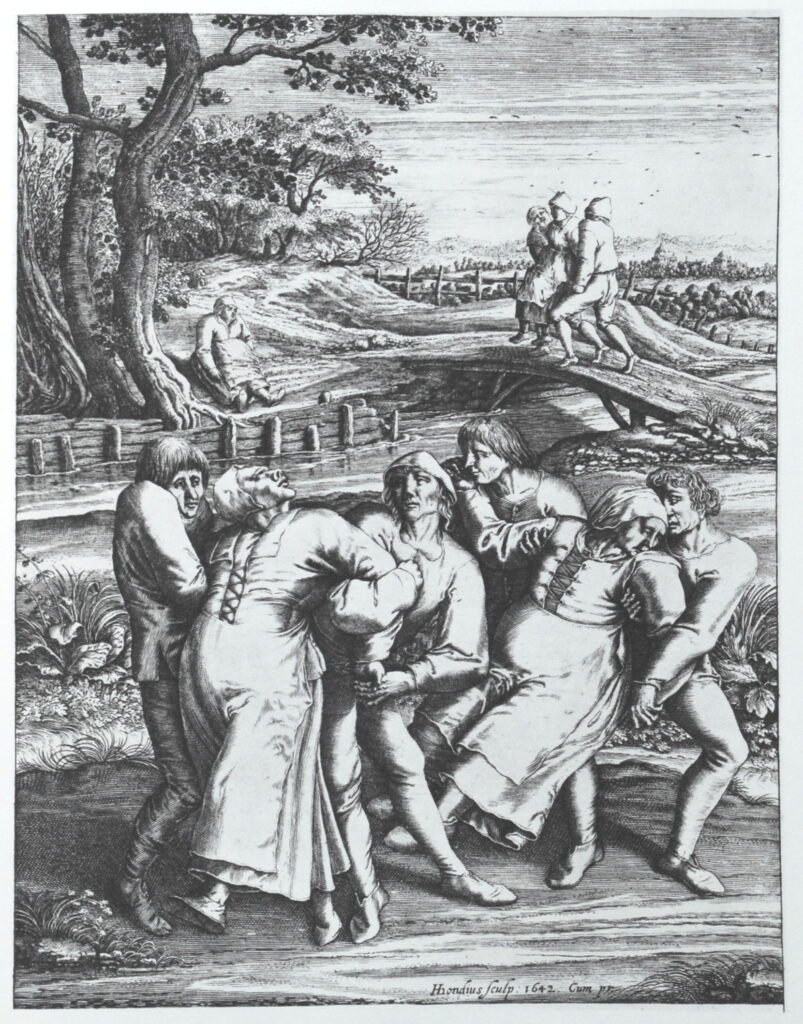 Following on from the last issue’s overview of the ‘Laughter Epidemic’ of Tanganyika, let’s touch on another condition with bizarre and confusing symptoms that baffled doctors when it manifested in mainland Europe between the 14th and 17th Centuries. ‘Dancing mania’ – also known as ‘dancing plague’, ‘choreomania’, ‘St John’s Dance’, ‘tarantism’ and ‘St Vitus Dance’ – was a social phenomenon whereby groups of people ‘danced’ erratically, sometimes thousands at a
time. It affected both adults and children and these unfortunate individuals would involuntarily ‘dance’ until they literally collapsed due to exhaustion, injuries, or some other related factor that would incapacitate them.

One of the first major outbreaks was observed in Aachen, Germany, in 1374, but the phenomenon quickly
got a foothold in the rest of Europe. Dancing mania was no joke – it utterly baffled the physicians of the time. As you might imagine, some of the ‘remedies’ of the time were based on spirituality and pure guesswork. It wasn’t unusual to see groups of people plagued by the condition accompanied by musicians, as some doctors believed this would ‘treat’ the bizarre illness. However, this strategy backfired, as it often prompted unaffected bystanders to join in.

This also paints the grotesque picture of multiple sufferers writhing in pain, screaming, and begging for help
while the musicians and bystanders accompanied them. The Lancet reported in 2009 that on one occasion in Maastricht in the Netherlands, some 200 people danced uncontrollably on the bridge over the Moselle River until
it collapsed, drowning everyone involved. In Strasbourg in 1518, authorities built a special stage
and instructed the sufferers to continue dancing round the clock, as dancing was believed to be both the affliction and the cure.

There is still discussion over the real medical cause of dancing mania. Some have suggested that it may have
been due to ingestion of a mould called ergot, which caused spasms, hallucinations, and tremors and was often
the result of consuming contaminated flour. However, this would not fully explain why the sufferers were compelled
to dance for days on end. It would also be a leap of logic to assume that ergot would cause exactly the same symptoms in everybody who ingested it. Another hypothesis is that it was caused by Sydenham’s chorea, an autoimmune disease that results from childhood infection with Group A beta-haemolytic Streptococcus and is characterised by writhing or explosive involuntary movements. One other likely cause was mass psychogenic illness, which was prevalent in those times and was fuelled by religious or spiritual fervour.
One thing is for sure – dancing mania was real. For a contemporary description, see the vivid accounts left to
us by the Renaissance physician Paracelsus

Comedy fans may be aware of the recent and untimely passing of Sean Lock, the deadpan stand-up comedian
best known for his panel appearances on TV shows such as 8 out of 10 Cats does Countdown, QI, and Have I Got
News for You, among others. Sean died from cancer at age 58, but his comedy will no doubt live on for many years to come. As an homage, here are a few of his selected jokes to round-off this issue’s offering.

The Daleks: Devoid of all emotion except hate. They’re like Piers Morgan on wheels

Some people say the glass is half empty or half full, but to me that’s irrelevant, because I’m having another drink.

‘You got your bag for life?’ Too bloody right I have. Now fill it with vodka or fags. I’m ironic. Let’s see who goes
first, me or the bag.

I don’t like the Queen. I think it’s absurd that we have a queen. Basically what we’re saying is that we’re no
more sophisticated than bees.

I’m just organised – I always put a bit of butter on the knife before I go to bed.

Interesting fact: A shark will only attack you if you’re wet.

A bit of advice: Never read a pop-up book about giraffes.