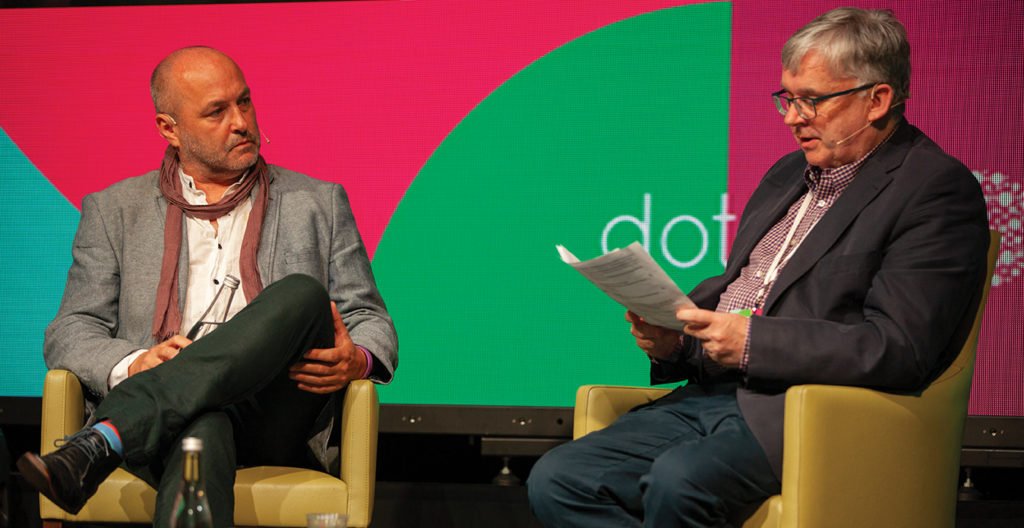 Paul Mulholland reports on this year’s dotMD conference, which largely focused on the value of storytelling

Ask anyone who has attended the dotMD conference and most will tell you that it is perhaps the most unique event in the Irish medical conference calendar. Explaining this uniqueness in a couple of lines is not easy, but it centres largely on the intersection of the arts and medicine. This year’s expanded dotMD, which moved from its recent home in Smock Alley, Dublin, to Bailey Allen Hall, NUI Galway to accommodate an increase in attendees, took place on 13-14 September and focused, largely, on the power and value of storytelling.

Both telling and listening to stories is an essential component of the empathy without which a humane health service, or indeed society, cannot function, according to keynote speaker, Mr Colum McCann. Mr McCann, whose novels include Let the Great World Spin and TransAtlantic, said in order to listen to and be “fully involved” in other people’s stories, doctors needed to listen to themselves. In an on-stage interview with Medical Independent (MI) columnist Dr Muiris Houston after his talk, Mr McCann spoke of the assault he suffered outside a Connecticut hotel in June 2014, which required him to receive medical care over the following year. The assault occurred after Mr McCann intervened to stop a man attacking a woman on the street, when he was punched from behind while talking to his son on the phone. In his interactions with healthcare professionals afterwards, he said the best doctors were those who listened and who would give him a nod to say everything would be ok.

“I began to think a lot about the medical profession and how it dovetails in with the idea of stories and storytelling and literature,” Mr McCann said.

In his talk, Mr McCann said that stories can be better than facts at changing minds. “Facts are mercenary things, stories are texture. Stories are a form of deep truth. And what we must do, if we really want our stories to be properly told, is to step into the shoes of others.”

Mr McCann asked if medical practitioners could think as poets, or, if not, at least like a reader of a poem.

“In that you and I must find a way into a patient’s suffering, that shotgun leap into what it means to feel. Not just a series of numbers, or figures, or screenshots. I can’t tell you the number of times I’ve been to a doctor and I haven’t been talked to, I’ve been talked at.”

He also asked doctors had they ever prescribed a poem to a patient. Mr McCann referred to “narrative humility”, which he defined as a “humility towards that which we do not know”.

“In so doing, we are apt to treat people much more compassionately. Listening is a mighty weapon. In the right hands it can work miracles.”

The power of narrative was showcased in the next section of the conference on medicine and storytelling. Former MI columnist, and Consultant Gastroenterologist in Tallaght University Hospital, Dr Anthony O’Connor spoke about his interactions with ‘Michael’, a frail elderly patient under his care. ‘Michael’, who was working on a sketch of boats by a harbour when he was in hospital, would ask Dr O’Connor if he “would live”. Dr O’Connor replied that the short-term goal, which both of them would aim toward, would be for ‘Michael’ to remain well enough to finish his drawing. Some time after being discharged, ‘Michael’ returned to the hospital with a completed painting, which he presented to Dr O’Connor.

“I was overwhelmed then and I am still a bit overwhelmed about it,” Dr O’Connor told attendees.

Dr O’Connor said that the painting “has helped sustain me through 12 very difficult years” of medical practice.

The next speaker was current MI columnist, Cork GP Dr Sarah Fitzgibbon who spoke about her own cancer diagnosis. She described her hospital visits in a series of dates, first giving birth to her son through emergency c-section and the extended hemihepatectomy she required six years later, which came after her colon cancer diagnosis and subsequent chemotherapy.

“It was a Wednesday in December 2014 when I first sat on the plasticky chemo-ward chair,” Dr Fitzgibbons said.

“So many people everywhere. So many questions and pieces of paper and weight and height and allergies versus sensitivities and when did my bowels last open? Being given a donated fluffy blanket full of good intentions, but which added to my quietly brewing temperature and resulted in a dramatic stopping of all infusions and my very first admission to hospital that didn’t result in a baby.”

Dublin GP Dr Austin O’Carroll also spoke during this section about a woman with addiction problems and why it is important to understand the lives of patients and where they are coming from.

Authors Ms Sinéad Gleeson and Mr Arnold Thomas Fanning then provided their perspective as patients in an interview with Consultant in Palliative Care, and author, Dr Rachel Clarke, and through reading their own work. Ms Gleeson developed juvenile arthritis as a teenager and was diagnosed with leukaemia later in life, while Mr Fanning has bi-polar disorder, which remained undiagnosed for years. Some essays in Ms Gleeson’s collection Constellations deal with her health difficulties and Mr Fanning’s Mind on Fire details his mental health struggles and his road to recovery.

“There has been a huge cultural shame in Ireland, and I talk about shame in the book quite a bit, that was focused around medicine and bodies and mental health,” according to Ms Gleeson.

“These stories now, people need to hear them. Ireland has changed more in the last 10 years than in the previous 60 or 70, which is a really good thing. It seems necessary now to tell these stories, because a lot of people didn’t get to do it before.”

Mr Fanning said the origins of his book came when he was asked to teach a creative writing class in ‘life writing’ to a group of psychiatric service users.

“The first thing I did when I spoke to the group was say ‘we are all writers here’,” Mr Fanning told attendees.

“Immediately changing the words in how you approached people. The purpose of the scheme was to help the people in the room to tell their own stories to doctors.”

‘Graphic medicine’, which is defined as the “interaction of comics and healthcare” formed a central part of dotMD 2019. Doctor and comic book artist Dr Ian Williams curated a graphic medicine exhibition that ran throughout the conference to showcase some of the best examples of this growing and diverse genre. Also, Ms MK Czerwiec delivered a talk about graphic medicine in relation to end-of-life care. Ms Czerwiec has been making comics under the pseudonym Comic Nurse since 2000. She is a Senior Fellow of the George Washington School of Nursing Centre for Health Policy and Media Engagement and the Artist-in-Residence at Northwestern Feinberg School of Medicine. According to Ms Czerwiec, comics are “amazing tools to use within healthcare”.

Regarding end-of-life care, Ms Czerwiec showed how comics can play an important role in reducing stigma and depicting a stage of life that many people find difficult to talk about.

Dr Kathryn Mannix, Consultant in Palliative Care and author of With the End in Mind, ended the conference with a talk on how modern society has lost touch with the normal process of death. Dr Mannix said the fear and stigma around the subject can be lessened if people understand the recognisable, often peaceful, experience of a ‘normal’ death.

“We need to stop messing around with daft language about ‘passing’, and ‘being lost’,” Dr Mannix said in conclusion. “This person is ‘dying’, soon they will be ‘dead’, because a ‘death’ is happening’ We have to use our ‘d’ words and narrate it as it is happening so that people don’t leave the deathbed thinking they saw something deeply traumatic… It is time for us to change that public understanding.”

This only gives a small flavour of an event that encompassed talks on physician burnout, the importance of sleep, zombie movies, and a highly entertaining interview with former State Pathologist Prof Marie Cassidy, as well as musical performances and discussions on jazz and art. The duration of the final standing ovation and positive reaction on social media show how firmly dotMD plants itself in the hearts and minds of attendees.