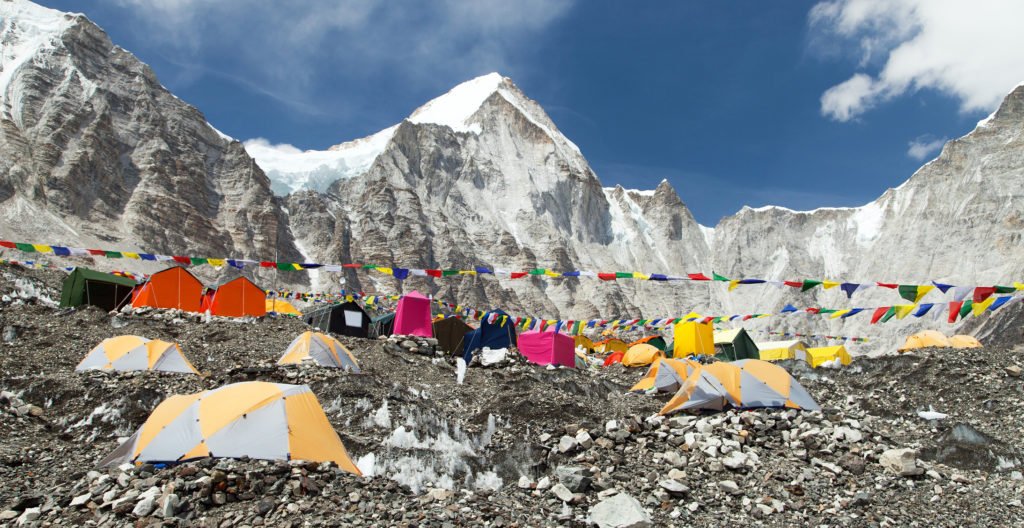 Who is brave enough to tackle Everest’s faecal time bomb?

In the June 2013 issue of National Geographic, Mark Jenkins wrote of Mount Everest that the two standard routes, the northeast and the southeast ridges, “are not only dangerously crowded, but also disgustingly polluted, with garbage leaking out of the glaciers and pyramids of human excrement befouling the high camps.”

But how much human excrement was Jenkins talking about? Two years later, Peter Holley’s piece in the Washington Post (3 March 2015) gave some idea to support its explosive title: ‘Decades of human waste have made Mt Everest a faecal time bomb’. Native Sherpas, averred Holley, bagged and carried as much as 26,500 pounds of human excrement each season “to earthen pits near Gorak Shep, a frozen lake-bed and village at 16,942 feet… ”

And we can add to this impressive tonnage Jenkins’s “pyramids of human excrement befouling the high camps”, confirming that not all visitors to the world’s mountainous regions are fastidious when it comes to matters of personal hygiene. Thus, when McLaughlin et al described a ‘Gastroenteritis outbreak among mountaineers climbing the west buttress route of Denali — Denali National Park, Alaska, June 2002’ in Wilderness and Environmental Medicine, (2005, 16: 92‒96) they noted that “climbers often decide to defecate in the snow while travelling in or near their camp in order to prevent the hassle of using established pit latrines or disposing faecal waste in crevasses”.

And for those readers with a lingering curiosity about other aspects of high-altitude lavatorial practice, McLaughlin et al provide telling detail. For example, “[p]ersonal hygiene after defecating includes the use of toilet paper, snow, or rocks” (rocks?).  So not only should mountaineers avoid picking up suspiciously-patterned geological (geoloogical?) specimens, but they should also bear in mind that “[h]igh winds spread faecal particles onto the top layers of snow, which is the water source for climbers”.

Unsurprisingly, the authors advise that with growing numbers on popular alpine routes, such as Denali and Everest, it’s likely that communicable disease outbreaks, and possibly serious sequelae at high altitude will occur more often.

Given this unappealing context, what should we make of the photograph taken on 23 May last year by British Special Forces soldier Nirmal Purja MBE and which quickly went viral? The photograph depicted a long, snaking queue of well-insulated individuals on the upper slopes of Everest. Apparently, they were waiting to get to the summit; but my guess is they were waiting to use the loo. With the sheer volume of human traffic trudging up there on fixed ropes, and with each person paying between $50,000-$130,000 for the dubious privilege, there must be a toilet in the Travel Lodge that is discreetly concealed just below the Hillary Step.

But who are these people? I’m afraid I find it hard to call many of them ‘mountaineers’. They seem to be less interested in investing hard-won time and experience on lesser peaks before going for Everest, and more interested in investing cash in a company that will enable them to indulge in a box-ticking exercise. A good example of the former was the Irish Everest Expedition. When Dawson Stelfox, on 27 May 1993, became the first Irishman to reach the summit of Everest, it was the culmination of years of preparation. As Lorna Siggins notes in her excellent Everest Calling (1994), Himalayan expeditions to Changtse and Manaslu (the world’s eighth-highest mountain) provided invaluable knowledge and planning expertise that would be put to good use during the two-month Everest expedition.

I found an insight into the different natures of those who are drawn to the hills in chapter 29 of my copy of Michael Ward’s classic Mountain Medicine: A Clinical Study of Cold and High Altitude (1975). It describes a “psychological survey of mountaineers”, which compared top climbers, rock-climbing instructors, average rock climbers, those with a general interest in mountain activities — which is how I would categorise most of those featured in Purja’s photograph — and non-climbers. One finding that stood out was: “Both the top climbers and non-climbers were more intelligent and abstract-thinking than the mountain activities group and rock-climbers.”

It seems to me that mountaineers have been snared in a trap of their own making. Having first put in the training; having first honed their skills on more modest endeavours; and having first prepared themselves correctly, while developing in parallel a cogent, life-enriching foundational philosophy that supports their love of high places, proper mountaineers have forged seldom-used pathways to the top, up which others now eagerly swarm — or are more likely hauled — in search of a tarnished glory which they have not earned.

Unfortunately, the few who first got to the top influenced what later transpired. This is captured nicely by Bauer in ‘The health impact of tourism on local and indigenous populations in resource-poor countries’ in Travel Medicine and Infectious Disease (2008, 6: 276‒291), highlighting the “voracious wolf in lamb’s clothing, the sensitive traveller is the real perpetrator of the global spread of tourism and in this capacity, must take responsibility for some of tourism’s adverse impacts”.

Everest’s ‘faecal time bomb’ must be addressed. Why? Because it is there.