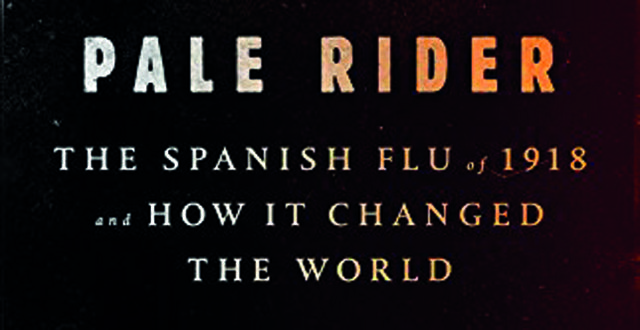 Pale Rider: The Spanish Flu of 1918 and How It Changed the World

There are some 400 books on Spanish flu, but this is the latest to mark its 100th anniversary in 2018. There have been many changes since then in virology, genomics, epidemiology and vaccination. But Spanish flu (of which more later) was not the first pandemic – Spinney suggests that flu may have been described by Hippocrates in 400 BC. The first flu pandemic may have spread from Asia to Africa to Europe in 1580. In 1830 there was a European flu pandemic and in 1889 an episode of ‘Russian’ flu.

Spanish flu probably did not emanate from Spain, but more likely the US. In March 1918 the first flu case was in the Military Camp Funston US, followed by an epidemic in the American Mid-West. Americans brought it to the trenches of WWI’s Western Front. Thereafter, it was largely spread by troopships and troop movements.  In WWI the US army lost more men to flu than to combat. Another possibility was that it was spread by members of the Chinese labour force. The neutral Chinese government was anxious to contribute to the war effort by supplying a body of labourers who would dig trenches, mend tanks, etc. In a highly secret operation 135,000 Chinese men were transported to France and 200,000 to Russia. There had been a flu outbreak in China in spring 1918.

The H1N1 flu A has its natural reservoir in water birds, especially ducks.  (It is estimated that there are one billion ducks in the world today). The Spanish flu started like a ‘normal’ flu with headache, fever, lethargy, etc, but a few days later became nasty.  The flu virus caused lesions in the respiratory tract, followed by a cytokine storm. The victims either developed opportunistic pneumonia, with pneumococcus or haemophilus influenza. The lungs were congested with haemorrhagic fluid. The worse cases progressed to a raging septicaemia and a spreading blue, black rash reminiscent of purpura fulminans.  Death followed quickly, like a thief in the night, with no antibiotics to treat it. The basic treatment consisted of antipyretics, hydration and nursing. Medicinal efforts included aspirin, quinine, arsenic, camphor and venesection.

The flu virus’ survival depends on its ability to jump from one host to another. Flu epidemic is essentially a crowd disease. Control of its spread involved quarantine, closure of theatres, schools, cinemas, churches, sports grounds, mass meetings, all of which were very unpopular. The armistice celebrations in late 1918 did not help. The Spanish flu hit the known reliables – the old and the young – but also had a very high prevalence in the 20-40 years age group. Many, many fit young soldiers were decimated. Quarantine at the ports of Venice, Australia and Iceland managed to control its influx in those places. However, surveillance and epidemiology were rudimentary sciences in 1918.

Spinney has given us a worthy over-wordy account of a veritable plague, which travelled around the world knocking healthy people like ninepins. US President FD Roosevelt had to be stretchered ashore on one occasion with flu in 1918 (he did not get his famous ‘polio’ until 1921). Her stats are a bit soft, but so was the scene at that time. She is nothing if not thorough in this dissertation, which is heavy going at times – 295 pages, notes of 20 pages and adequate index.

Virus means poison. The first virus was recognised in 1892 by implication; the first virus to be seen occurred in 1932.  All they could describe in 1918 was that there was something smaller than a bacterium, ie, a filterable virus. The Spanish flu coincided with an epidemic of swine flu in pigs. The first flu vaccine was produced by a Russian scientist in 1936 and was given to one billion Russians in the next 50 years. Having learnt their lesson in WWI, the US administered polyvalent flu vaccine to US troops departing for WWII in 1944. Flu virus was first seen by electron microscopy in 1943.

So there you have it. American or Asian flu, take your pick, but probably not Spanish flu. Only type A flu viruses cause pandemics. We need to know more about viruses. Are they alive or dead? What is their role in human ecology? Have they any useful activities like bacteria have? Why was the last predicted pandemic (in 2009) a non-starter despite World Health Organisation (WHO) predictions? When will the next viral pandemic occur?