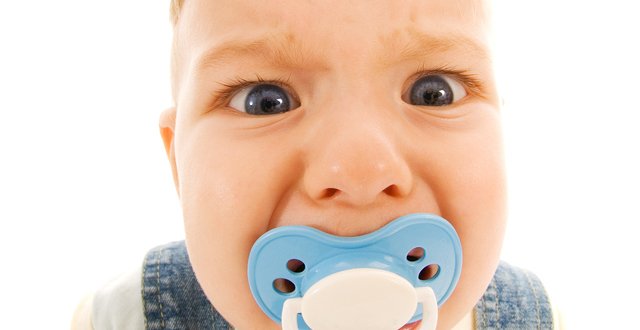 New research has supported the position on the NHS in the UK, which has long claimed that allowing children over the age of one year to suck a ‘pacifier’ or ‘dummy’ can affect their speech development. However, the authors have gone further and say that the use of dummies should also be curtailed in children under the age of 12 months.

The report is the first to link speech perception to oral-motor movements; in the study, when the infants had a dummy in their mouths, they were unable to distinguish between certain letters, leading to the (seemingly obvious) conclusion that babies need to use their tongues to help their speech development.

Six-month-old English-learning infants were given dummies while they listened to two Hindi ‘d’ sounds that infants of this age can readily distinguish — the Hindi language has two ‘d’ sounds, whereas English contains only one.

While they had the dummies in their mouths, the babies were unable to distinguish between the sounds, whereas when the dummies were removed and they could move their tongues, they could recognise the difference.

The findings were published in Proceedings of the National Academy of Sciences and appear to show a direct link between oral-motor movements and auditory speech perception.

Dr Alison Bruderer of British Columbia University in Canada commented: “Until now, research in speech perception development and language acquisition has primarily used the auditory experience as the driving factor.

“Researchers should actually be looking at babies’ oral-motor movements as well.”

At the 2014 Cheltenham Science Festival, academics from Cambridge University and University College London urged mothers to suck their babies’ dummies to clean them, claiming that an excessive culture of cleanliness is killing beneficial bacteria and compromising human immune systems.

They also called on mothers to let children eat food from the floor, get a dog, take regular walks in the countryside, visit farms and kiss family members regularly, as well as to exercise in the park rather than at a gym.

Prof Graham Rook advised: “If the parents pick up the dummy right away and sterilise it or replace it with a new clean one, that child has a considerably greater chance of having eczema and asthma.

“But if you’re the sort of parent that sucks it clean and sticks it back in the baby’s mouth, then it actually protects them from allergic disorders.

“It’s because they have better bacterial development in the mouth and gut and this is what protects them.”

Thinking outside the body

Research in the journal Current Biology has reported that Swedish scientists have, for the first time, created an ‘out-of-body’ illusion and say their findings could pave the way for major advances in tele-operations, robot control and virtual reality.

The team put study participants inside a brain scanner with head-mounted displays, through which they viewed themselves from a different part of the room, while a third person lay on the floor in the corner.

The authors then touched the person’s body in an area that could not be seen by the participants, while simultaneously touching the stranger’s body in the same place.

Lead author Dr says Arvid Guterstam said: “In a matter of seconds, the brain merges the sensation of touch and visual input from the new perspective, resulting in the illusion of ‘owning’ the stranger’s body and being located in that body’s position in the room, outside the participant’s physical body.”

The result, said the authors, was that participants were ‘visually teleported’ to different parts of the room.

“The sense of being a body located somewhere in space is essential for our interactions with the outside world and constitutes a fundamental aspect of human self-consciousness,” said Dr Guterstam, adding that the studies may also help to better understand the effect of the anaesthetic drug Ketamine.

“Our results are important because they represent the first characterisation of the brain areas that are involved in shaping the perceptual experience of the bodily self in space.”

Principal investigator Dr Henrik Ehrsson told IBTimes: “It’s a proof of principle — the technology would be very challenging but the brain is ready to jump on board, so long as we can come up with the gadgets,” adding that a surgeon could potentially ‘teleport’ from one hospital to another to perform surgery through a robot avatar system.

“You ‘see’ through the eyes of the robot far away. When you move, the robot mimics your movements in real time.

“The work we have done here would suggest you can have a full-blown body illusion and place [the] illusion that the surgeon would experience, to be right there in the surgical field, or maybe even the battlefield.”

There will be blood

Following on from the so-called ‘vampire facelift’ procedure, cosmetic surgeon Dr Charles Runels has taken his procedure a step further and is offering the procedure to women who want breast enhancement without hyaluronic acid fillers.

In the procedure, blood is taken via an IV line from the arm and processed through a machine to separate the platelet-rich plasma, which is then injected into the breast at multiple sites. Runels says this stimulates production of collagen, new blood vessels and fatty tissue.

The effects of the procedure take two-to-three months to become fully evident but can last for at least one-to-two years, it is claimed.

“The procedure is not for women who are elderly or even younger women with very pendulous breasts,” according to Dr Runels.

“But it does do miracles for women who have lost sensation after breast implants and for women who have still a nice shape but the implants are five-to-10 years old (or even recent) and there’s some shortage of tissue, so that there’s not quite the beautiful contour that  you’d see without implants in a younger breast.”

Not only are visions of deceased loved ones extremely common, but they also provide an important and “comforting” part of the dying process, according to research published recently in the Journal of Palliative Medicine.

A team from the Casnius College in New York looked at the frequency and content of dreams and visions, relative to how close the subjects were to death when they experienced end-of-life dreams and visions (ELDVs).

While previous studies have drawn on information gathered retrospectively from healthcare workers and family members, the New York team interviewed 66 hospice patients about their ELDVs.

They found that the majority of patients reported having at least one dream or vision every day and while some 50 per cent of these took place while the patient was asleep, they reported that the ELDVs were extremely vivid and realistic.

While the participants said most of these experiences involved living or dead relatives or friends, visions involving deceased friends or relatives were reported to be especially comforting.

The researchers called for more studies on the phenomenon in order to advance the quality of palliative care provision.

Author Dr James P Donnelly explained: “The impact of pre-death experiences on dying individuals and their loved ones can be profoundly meaningful… these visions can occur months, weeks, days or hours before death and typically lessen fear of dying, making transition from life to death easier for those experiencing them.

“This study demonstrates that ELDVs are commonly experienced and characterised by a consistent pattern of realism and emotional significance.

“These dreams and visions may improve quality of life and should be treated accordingly.”