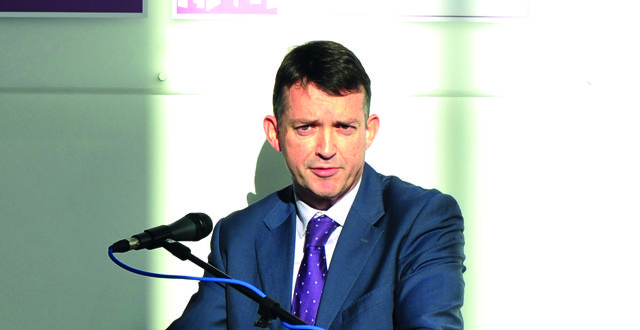 It was recently announced that more blood cancer patients are to benefit from Irish oncology research with the Mater and Beaumont Hospitals, Dublin, joining Blood Cancer Network Ireland (BCNI).

The Irish Cancer Society has stated that it is committing €450,000 over the next five years to support the expansion of the BCNI, a new clinical research network for blood cancers, which is being led by NUI Galway.

The BCNI was established by the Society and Science Foundation Ireland in 2015 to provide blood cancer patients across Ireland with improved access to novel drugs and treatments through early-stage clinical trials.

The research initiative is being led by Prof Michael O’Dwyer, Professor of Haematology at NUI Galway.

On foot of the initial investment, the Society has announced a further commitment of €100,000 per annum over the next four and a half years to support and facilitate the Mater and Beaumont Hospitals to join the clinical research network. As of February, both hospitals will join existing clinical research facilities in NUI Galway, University College Cork, and St James’s Hospital/ TCD to extend the reach of the Network into all four HSE regions.

Prof O’Dwyer said the expansion plans would benefit more blood cancer patients and put Ireland on the map in the field of blood cancer research.

Through the BCNI, a national early-phase (phase 1b) clinical trials network will be established, with a single quality system, management system, and progression path designed to ensure that Irish patients will benefit from potentially beneficial new cancer therapies at an early stage.

Having a single national contact centre with access to sites in Dublin, Galway, and Cork is intended to be attractive to the pharmaceutical sector. The early-phase cancer trials network will work closely with ICORG and any non-ICORG sponsored studies will be mentioned at disease-specific sub-group (DSSG) level and publicised so that patients in any hospital can benefit from referral.

Prof O’Dwyer told the Medical Independent (MI) that, until recently, there has not been much activity regarding phase 1 trials in blood cancers in Ireland.

“We have been able to get involved in phase 3 studies and some phase 2 studies but very few phase 1 studies have been done,” he explained.

“We had some initial experience doing phase 1s in Galway and it was a satisfactory experience, so we felt it would be very advantageous if we could try and replicate what we were doing locally here on a national basis. Phase 1 trials are resource intensive. Patients need to be monitored a lot more closely and have a lot more tests performed than patients on an average clinical trial.

“We were fortunate that when the clinical research facility was first established here in Galway that Prof Frank Giles was the Director. He had vast experience in phase 1 trials in leukaemia and other blood cancers. During that time a new focus was put on early-phase development. Resources were put behind it and we realised that this is something we could actually do.

“However, Galway going it alone in the long-run was not going to be sustainable. If, however, we were able to bring several centres around the country together to act as a single virtual centre, we realised that this could be very attractive to pharmaceutical companies internationally and also provide us with the opportunity to develop some of our own studies.”

The BCNI is currently involved in a phase 1 trial in acute leukaemia and acute myeloid leukaemia (AML) using an E-selectin, a cell adhesion molecule expressed only on endothelial cells activated by cytokines. It is believed that acute leukemic cells bind to these receptors in the bone marrow and become resistant to treatment. Effectively, the treatment frees leukemic stem cells from the bone marrow, making them more sensitive to standard chemotherapy. In patients who have relapsed or are unresponsive to conventional AML chemotherapy, this trial is combining chemotherapy with the new inhibitor.

The early results are promising, according to Prof O’Dwyer.

Another trial is due to begin shortly that will use the same agent in multiple myeloma.

In the summer, a trial will also be launched using a new anti-CD38 monoclonal antibody in young, newly diagnosed patients, along with standard therapy.

Prof O’Dwyer said that phase 1 trials are of more benefit to patients now than ever before due to improvements in drug development.

“Industry is getting better at designing drugs and we, as researchers, are learning more about the different cancers and identifying potential new targets,” he said.

“The new drugs are getting better so there is a likelihood that when you go into a phase 1 trial, of actually benefitting with the response to the agent, than there would have been maybe 10 or 20 years ago. In the past, phase 1 trials were very much seen as trials of last resort, where the intention was really to see how much of a drug could you safely give to a patient to try and find out the dose of the drug to give and if you happen to see any responses that was a real bonus. Now, yes we still need to find out what the safest way of using the drug is, but we have a higher expectation now that we are actually going to see activity, which is a real change.”

The Network has plans that all new blood cancers in all hospitals will eventually be collected for a national biobank, with funded support for every haematology unit.

Initial funding will be used for collecting samples on newly diagnosed myeloma and AML patients. The funding allows for collection of samples in NUIG, TCD, and UCC associated hospitals.

It is anticipated that the successful start-up of this biobanking will attract further funding to allow biobanking for all blood cancers. The BCNI biobank will be linked to Biobank Ireland Trust, the national biobank network of the country. It will store live leukaemic cells; live bone marrow stromal cells; and RNA and DNA isolated from the leukaemic and bone marrow stromal cells.

Over time, the genetic make-up of the stored samples will be analysed and made available to researchers. The genetic database will become an invaluable asset and information resource to drive the development of better treatment strategies for patients with blood cancers.

“We will have the opportunity to collect samples from as many patients as possible with blood cancers in Ireland,” according to Prof O’Dwyer.

“Those samples will be available for various different projects and analyses, including looking at the genetic make-up of the cancer, but also potentially looking at how particular patients respond to different treatments.”

The NCRI has been funded to recruit and train additional tumour registration officers (TROs) to collect data that is relevant to prognosis, management, therapy, and outcome. It is also planned to undertake patient-reported outcomes measures (PROMs) studies with the eventual plan of establishing a registry of blood cancers through the NCRI.

“The registry is particularly important because we don’t really have a good handle on what exactly happens to Irish patients with blood cancers,” Prof O’Dwyer said.

“We have a good idea of the incidence and good idea of survival. That is about it. That is the only information we get. So between diagnosis and death we really don’t have any useful information. This is a real barrier in how blood cancer patients are treated in Ireland, what the patterns of treatment are with different drugs, and what the cost of all of this is. So every time a new drug comes along, it is very difficult to do a health technology assessment to compare how cost-effective a new drug will be against the previous standards of care. Because we just simply don’t know how cost-effective the previous standards of care are. So by putting in place an enhanced registry, where we collect a lot of information about what treatments patients get and how they respond to those treatments, we will have a much better idea of the patient experience in Ireland, both in terms of quality-of-life and also cost-effectiveness of treatments.”

Prof O’Dwyer said that the response from stakeholders to the establishment of the BCNI has been extremely positive.

“There is a tremendous amount of goodwill from the patients, from the funding agencies, as well as from the pharmaceutical industry, who are backing up the goodwill by putting money on the table. It is opening doors to us in terms of getting access potentially to new clinical trials.

“All of this takes time. It doesn’t happen overnight. It is going to take a few years before we can really see the full benefit of the new network, but definitely things are happening on the ground.

“The biobank is in an advanced stage of getting set up. We can’t just immediately start collecting samples. There is a lot of paperwork, protocol, and procedures that have to be put in place before we can physically start the process of collecting the samples. Equally, the registry databases are in the process of being set up, staff are being hired.

“Bit by bit we will have tangible results to show for the investment that is being made. Already the whole enterprise is showing real promise,” he concluded.

Blood cancers make up approximately 10 per cent of all cancers and are the fourth most common cause of cancer-related deaths in Ireland.

Every year, more than 1,500 people across Ireland are diagnosed with blood cancer.

The most recent data available from the National Cancer Registry of Ireland shows that in 2013:

Over 250 cases of multiple myeloma were diagnosed.

Close to 400 cases of leukaemia were diagnosed.

Over 900 cases of lymphoma were diagnosed.