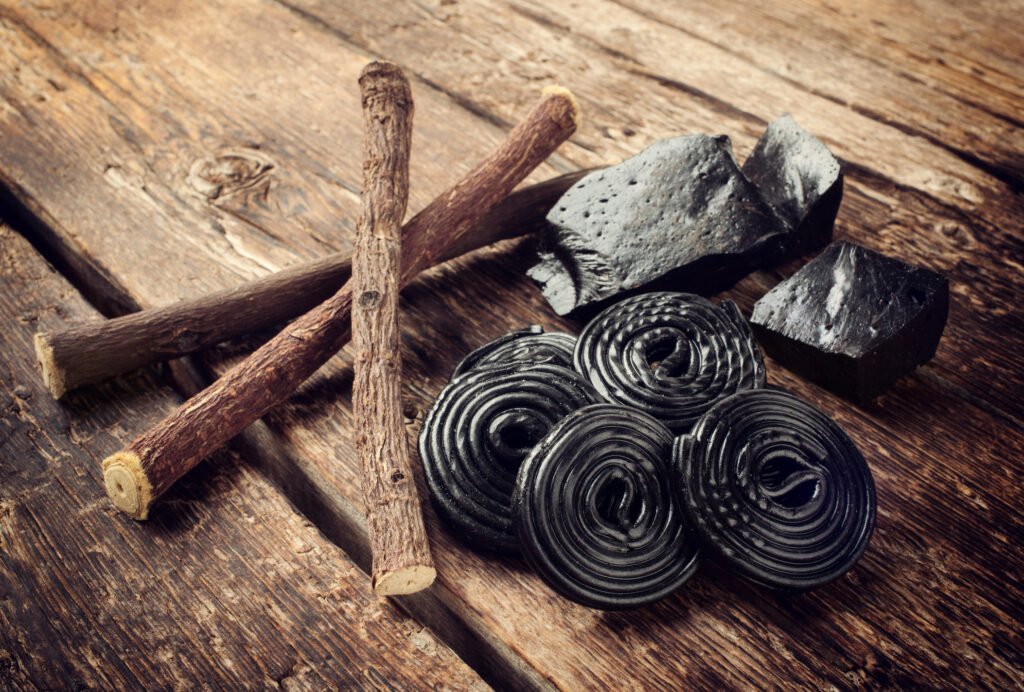 Liquorice is one of those flavours about which nobody seems to be neutral. You either like it or hate it. I’ve never heard anyone say that they can take it or leave it. In fact, I have a feeling that the majority of the Irish population gives it a very wide berth.

There are very few flavours to which I react as negatively as the afflicted do to liquorice. Kidneys, certainly, are up there, and a certain kind of anchovy liberally applied to pasta dishes. These make me gag. I wouldn’t thank you for a sardine, tinned or fresh, although I loved them as a child. On the other hand, as a child, I couldn’t stand mustard or Marmite and now I can’t get enough of them.

Perhaps it will eventually be revealed, as in the case of coriander and celery, that hatred of liquorice is genetic. I just wonder how many geneticists could be bothered to investigate. I’m a liquorice enthusiast and have been since childhood when, finding Liquorice Allsorts a bit too austere for my infant palate, I resorted to liqourice-flavoured toffee. They were in the form of jet black and shiny “penny bars” or the same stuff fashioned into individually wrapped sweets, created by Lemon’s on the banks of the River Tolka in Drumcondra.

There was a very posh version from Callard & Bowser, the people who were famous for butterscotch (and impromptu dental rearrangement), but this was rarely seen. I still respond to the offer of liquorice toffee like an old warhorse getting a whiff of cordite. Liquorice comes from the root of Glycyrrhiza glabra, a Mediterranean plant which I’ve grown on occasion just out of curiosity. It has rather attractive grey-green foliage and if you crush the leaves you get a subtle scent that suggests a distant bag of Liquorice Allsorts.

The kind of liquorice that you get in the all-black Liquorice Allsorts or the hollow tube of a sherbet fountain is actually a combination of the juice of its root along with powdered sugar and vegetable starch. In its unadulterated form it has a very strong taste and, oddly enough, is one of the sweetest substances in nature although it contains no sugar at all. The Italians are fond of little nuggets of pure liquorice (Amarelli is the most famous brand), which are one of the most intense things you can taste. A bit too intense for even me, I’ll admit.

They taste sweet, although, as I say, there’s no sugar; and then a kind of bitterness kicks in, which eventually delivers a knockout blow to the palate.

There was a time when you could easily buy lengths of liquorice root for chewing (or for giving to teething children) but these days you will have to go to a good health food shop. Traditionally, liquorice has been used to treat coughs and colds and to help heal gastric ulcers. It’s very soothing on the gut and it has, apparently, fairly significant anti-inflammatory powers. Also, liquorice is a very effective laxative. If I had known this as a child, in the days when there was a wholesale obsession with bowels, I would have campaigned for a liquorice ration in place of the dreaded Senokot or Milk of Magnesia.

Liquorice, as it turns out, is not as innocent as it may appear. It has long been known that it tends to increase blood pressure. Until recently, it was thought that you would need to eat a vast amount to be affected. Not so, according to a report in Nature a few years ago, which quotes an Icelandic study.

A few handfuls of Liquorice Allsorts can be enough. As a result, liquorice should be avoided by people with hypertension and, also, it seems, by those on digoxin-based drugs. Through its interaction with aldosterone, it causes reabsorption of sodium and excretion of potassium, resulting in an increase in sodium levels and a decrease in potassium levels – one symptom of which is muscular weakness. It boosts cortisol levels and is not advisable in pregnancy.

The Finns have a bizarre habit of mixing liquorice with ammonium chloride to make the revolting salmiak for chewing. A study from 1998 suggests that women who use a lot of this stuff – that even I would avoid like the plague – may have children who are prone to attention deficit hyperactivity disorder, as well as other issues.

However, if you want to use liquorice to soothe an inflamed digestive system you can buy de-glychirised liquorice capsules, which deliver the effect without the side-effect. Some people who hate liquorice quite like aniseed. If you are one of these and have enjoyed pastis, you should know that Pernod is aniseed-based while Ricard – far superior in my view – contains a lot of liquorice.

Liquorice is an interesting flavour to work with in the kitchen. Some chefs use it in gravies and sauces with game and red meat. But it needs to be treated with care as it can take over. Liquorice ice cream, as I tasted on The Restaurant when publisher Norah Casey cooked for me and Paolo Tullio, is a liquorice lover’s dream. It was the only dish of which I ever asked for a second helping.

Nigella Lawson in her rather fun cookbook Nigellissima has a recipe for Italian liquorice creams, made with those little Amarelli nuggets, that is so good it might even start the process of conversion for a liquorice hater. But I doubt it. Hating liquorice is with you for life.