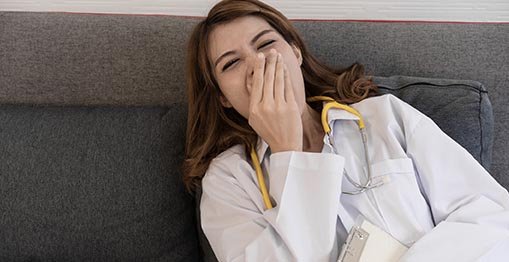 Fueled by cocaine, the US surgeon William Halstead did much to originate the grueling work schedule demanded of doctors

Doctors can survive on less sleep than everyone else. Years of being ‘on-call’ has trained us to get by on little to no sleep. Our formative years of hospital training, enduring often brutally punishing ‘on-call’ rotas and fragmented sleep, have battle-hardened us. Anyone who has read my previous pieces here, will know I am a firm believer in the necessity of adequate sleep and not in sleep deprivation. But where did the regimen of sleep deprivation in the training of doctors originate?

The answer it would seem is with a US surgeon and a whole lot of cocaine.

The modern-day residency, as it is known in the US, was developed by the infamous surgeon William Halstead, after spending time developing his surgical skills in Europe. This intensive period of hospital-based training has continued to this day worldwide; a veritable ‘trial by fire’ for all doctors in training. It is during this fabled period that we acquire such mythical abilities of tolerance to limited sleep.

As a trainer, Halstead was a challenging taskmaster, expecting his surgical trainees to keep up with his crippling work ethic and his renowned ability to work for days at a time without sleep.

If you wanted to be best, you had to emulate the master. Many tried and many failed. The modern-day residency was born. But was it a fair standard; and did Halstead have an advantage that his trainees did not?

Undoubtedly one of the Godfathers of contemporary surgery, William Halstead, was responsible for many medical firsts in breast and inguinal surgery, but was also a pioneer in the use of cocaine for local anesthesia. This latter advance would become one of his crowning glories and also lifelong struggles.

While investigating the use of cocaine for anesthesia he first tested it on himself by injecting it into his veins. Unsurprisingly, this very quickly led to a considerable cocaine addiction. Fueled by up to an ‘8-ball’ or 3.5g of cocaine every forty-eight hours his ability to work a gruelling schedule, without sleep, was a challenge for any of his trainees attempting to keep pace. He insisted that his residents do on-call 362 days of the year. How glorious those three days off must have been.

Remarkably, Halstead continued to perform complex surgeries while using cocaine daily, but was known for abruptly storming out of surgeries, at that time for unknown reasons, leaving his trainees to finish the case. He was also known for his mercurial and, at times, erratic behavior. But after publishing a research paper on the use of cocaine in anesthesia that was almost entirely gibberish his colleagues decided it best to detox him, by abducting him, and putting him on a steamer headed for Europe, far away from any sources of cocaine.

This rehabilitation attempt failed miserably as Halstead brought along a ‘party’ supply of cocaine for himself, and after getting through that, broke into the ships medical stores to plunder any cocaine kept there. Frustrated, his colleagues then admitted him to a rehabilitation centre in Providence, Rhode Island. Cocaine addiction at that time was rare and the method of detoxing such individuals involved the use of morphine. Emerging seven months later, Halstead had now both a cocaine and a morphine addiction to deal with. He would struggle with both to varying degrees for the rest of his life.

Halstead was also fabled for having his shirts washed and pressed in Paris, but many suspected that there was more than just fresh laundry in those transatlantic deliveries. Although using morphine daily from then on, he was thought to have gone periods of time without using cocaine. But according to his senior colleagues in John’s Hopkins, Halstead would regularly “disappear out of town and then return, very contrite and apologetic”.

Amidst the chaos Halstead also went on to establish the use of the surgical glove, not for sterility purposes, but for his scrub nurse, who was allergic to antiseptic; she later went on to become his wife. On two separate occasions he operated on his own family members. He operated on his sister for a post-partum bleed, after transfusing her with his own blood, and performed a cholecystectomy on his own mother at 2.00am on their kitchen table.

Thankfully, exposure to such gruelling training periods or to such colourful trainers, such as William Halstead, have lessened over time, but the impression that doctors somehow carry an immutable ability to go without sleep has lived on. By the very nature of what we do, interruption of sleep will be an intrinsic part of the job, but it must be recognised that, as doctors, we carry no innate sleep deprivation superpowers and work practices must always evolve to reflect this. In the meantime, I suggest you catch up on sleep, when you can, rather than emulating the patterns of those who have gone before us, as wild and entertaining as they may have been.