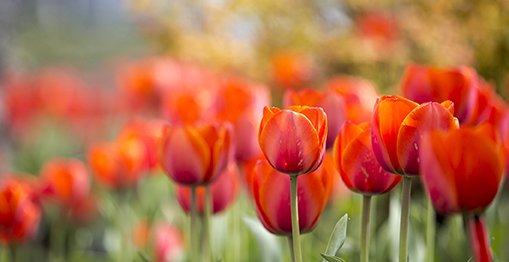 She decided she would plant the tulips herself. Angling the flat blade above the damp earth, she placed her foot on the step, the handle snug against her Wellington-clad shin and pushed with all her strength into the resistant soil. Slowly, a trench emerged, 15 centimetres deep, measured carefully with her trowel. Clumps of discarded clay formed ant-hills along the edges.

As her breath laboured, she rested and noticed the leaves, golden and fragile, extending platter-like from the lower branches of the trees — a late offering to the lingering autumn sun. Tears crept slowly down her cheeks. It was the beauty of it all. The words of the poet Patrick Pearse came to her mind: “This beauty that will pass.”

Letting the tears fall unchecked, she dropped to her knees to scrape the loose soil from the bottom of the grave where she would bury the bulbs. The warmth of the soil surprised her. She had expected her bare hands to meet the cold ground but then remembered that the core of the earth was warm and was comforted by that thought. Rising up, she patted the soil into place over the covered bulbs, tired but satisfied. She would see these flowers dance in the spring sunshine.

Her afterlife had begun. Until that point, she would never have made a pact with tulips.

The day before the flower-planting ceremony, she had boarded a train to Dublin to meet with a doctor who would tell her the result of her CT scan. “You might want to bring your husband,” the secretary had said. She knew this was a warning shot, but she did not tell her husband. She boarded the train alone in the dim early-morning light and settled into her seat, expecting that, free from the domesticity, the crockery and cutlery, the occasional tables scattered with carefully-placed photographs and ornaments, her thoughts would form a narrative that might help her find her balance. But in the carriage, detached but not alone, no thoughts came, no story emerged to make sense of it all.

Taking a book from her handbag, she began to read. “The train pulled out of the station, like an avalanche started by a gentle push.” Perhaps she was just a character in a book, she thought. Perhaps it was all a dream. After a time, the book did not hold her attention and she let her gaze wander, to the darkened world beyond the window, the blurred shapes of bushes and trees, the twinkling of lights in distant houses. Inside each lighted window, someone prepared for another day. She thought how every day she used to tear another page off the calendar, scrunch it up tightly and throw it in the bin. Another day over. Now she wished for long days without end, that she might capture every moment, every thought, every feeling. For life was a gift and she should never have wished it away.

The secretary avoided her gaze as the consultant held the door open, glancing behind, as if searching for the rest of her, as if she was not a whole being. “I didn’t tell my husband I was meeting you,” she said. “He thinks I am meeting friends.”

The consultant sighed and gestured towards a chair, before walking slowly and deliberately to his own at the other side of his desk. She felt sorry for him. How many people had he seen in his lifetime and told them that their cancer had spread and that he could do nothing to cure it?

“How was your day?” her husband asked, coming to meet her as she dropped her keys on the hall table. “As expected,” she replied. There would be no tears, no dramatic disruption to the rhythm of their lives. But he would know that she was preparing to leave. He would know and he would help her.

Early one spring morning, she sat in her chair inside the kitchen window and watched the leaves of the hornbeams sparkle in the sun. Below them, intricate spiders’ webs extended between the branches of a beech hedge. The storm that had started in her head when she had first heard the secretary’s message had passed. The tumultuous thoughts had come to rest gently on the shore of her mind, where they ebbed and flowed, leaving tiny sparkling pebbles in their wake. The space in which she had knelt while burying her bulbs was now a pantomime of coloured goblet heads dancing in the wind. As she sat, the little wooden gate burst open and a child entered the garden. A golden-haired child who rushed straight to the flowers to touch their dancing heads. “Careful,” said a woman, following close on her heels. “Don’t trample granny’s tulips.” And in that moment, the beauty she had created made her happy and she did not think about its passing.