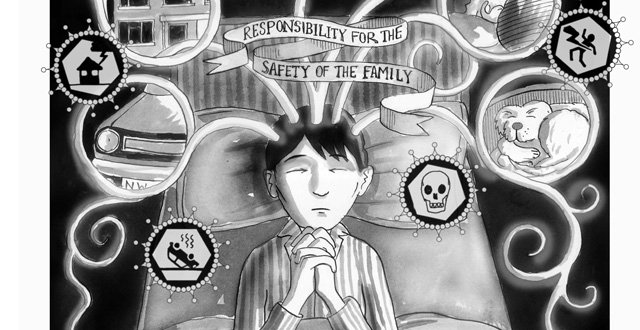 When’s the last time you read a comic?

As a boy I loved reading The Beano and later, like lots of other adolescent boys, immersed myself in the more violent worlds of Action and 2000AD. As a medical student, I became attracted to the subversive allure of Fat Freddy’s Cat, The Fabulous Furry Freak Brothers and then, in my late 20s, to Viz magazine. Then I stopped. Whatever role comics might have played in my childhood and young adulthood, it was time to move on. So why do I find myself, in my early 50s, back reading comics again?

Because of GP and cartoonist called Ian Williams. Williams is responsible for coining the term ‘Graphic Medicine’ which describes, according to the graphicmedicine.org site that he helps run, “the role that comics can play in study and delivery of healthcare”. Williams has also produced a wonderful new semi-autobiographical graphic novel, entitled The Bad Doctor — “a darkly humorous tale of medicine, cycling, obsessive-compulsive disorder and heavy metal”. The book details the life of the flawed (in his own eyes), yet deeply human, Dr Iwan James. This wonderful meditation on medicine, humanity and healing is a great reason to start reading comics all over again.

As soon as the book starts, we are drawn into Dr Iwan’s world and sympathise with him as he hilariously navigates the daily grind of heartsink patients, difficult colleagues, middle age, baldness and self-doubt. It is particularly touching where it deals with his experience of growing up, trying to maintain relationships and work, all while suffering from OCD.

In a scene depicting his childhood, it describes the early development of an exaggerated sense of responsibility for the health of those around him (something many of us will identify with). He even demonstrates how his unique experience of living with an illness can help him to help his patients. In another touching scene in the book, he breaks the usually unspoken boundaries of the doctor-patient relationship by sharing the details of his own illness with a patient struggling to cope with OCD — and in doing so, helps his patient.

Writing comics, and bearing witness to his own problems may also have had a cathartic effect for its author. Writing in The Independent, Williams describes how comics gave him a means to talk about an area of his life he hadn’t, as a doctor, felt able to share before.

“In fact, I almost never discussed them with anyone before finding my voice through the medium of comics, in which I found a way to articulate my own earlier struggle with mental illness.”

The book also details the attitude of his professional colleagues to his mental health problems. When he confides with his practice partner that he has fantasised, throughout his life, about killing himself (“Wouldn’t act on it, though… don’t worry. It’s only a mental habit. I don’t own a gun or a guillotine”), his partner’s primary concern is that this might invalidate the practice insurance.

I read the book three times in 24 hours (although it runs to just over 200 pages, it can be read in 30-to-40 minutes). There is something unique about the reading experience of being pulled along by the combination of the framed pictures, the text and the gaps in between. Using cartoons, he manages to describe Dr Iwan’s world in a way that would have been impossible in the form of an essay or through fiction.

With great bravery, wit and technical skill, Williams has managed pull off a number of impressive feats simultaneously. By digging under the surface of a doctor’s working life in the context of his day-to-day existence, he gives an insight into how the theory of medicine is so different from its practice. He also demonstrates what it is like to live life with a mental health illness, while simultaneously showing an excellent doctor practising good medicine, despite it. All the while keeping us laughing and entertained.

This funny, sometimes sad and courageous book will, I hope, go some way to help non-medical readers to understand the challenges of practicing medicine and show that doctors, like them, are human and suffer.

It might even help a few doctors to think a little differently about mental illness amongst their own.