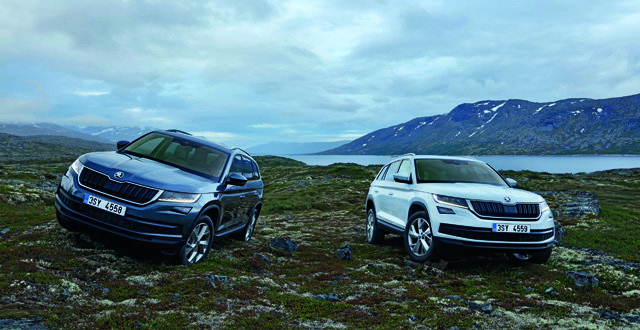 Every now and again, it is nice to bring you a car that shakes up the market a little. Skoda hasn’t been absent from the 4×4 saloon market, it’s just that their current offering, the Yeti, was not seen as ‘cool’. The Yeti was praised heartily by Clarkson the notorious. Didn’t help sales greatly. And they have had four-wheel drive versions of their Octavia for some time.

Another thing about Skoda: They were always looked upon as being unreliable. Wrong. They were lumped by reputation with the other Eastern Bloc cars of the time, the Ladas, the Wartburgs and Moskvitch, which were not good. Skoda were the best of that lot.

They had regular class wins in the RAC Rally of Britain, winning the under-1,300cc trophy for 17 years running. My brother bought an Estelle 130 Rapid that had been lying in a field. It let him down once. He was overtaking and doing about 90mph in third gear when the rotor arm disintegrated from the centrifugal force.

Some years ago, my dad wanted to change his Audi and my brother wanted him to have something reliable. After all, he didn’t want to be called to rescue him or to fix it for him. They don’t have a Mechanics Council to deal with mechanics treating family members and he knew he couldn’t ask his dad for money! He chose the Skoda Superb, and both were pleased with it. Dad found it reliable and my brother didn’t have to spend time repairing it.

Anyway, Skoda have come a long way since then. Styling is getting there steadily. Now they have the Kodiaq, a rival to the SUVs of today’s market. Compared to the Audi Q5, it is marginally bigger and more than marginally cheaper. Sorry — ‘less expensive’, similar to the VW Touran, which does not extend to seven seats, despite being ‘built on the same platform’.

My test car for the weekend was the 150bhp 4×4 diesel. There is currently a choice of six different models, from the 1.4 petrol (125bhp) to the 190bhp diesel from €29,395 to €44,745. Driving the 150bhp model is genuinely lovely. Suspension is set up for comfort, which means it absorbs bumps and unevenness well, but can’t be easily sent into a lovely four-wheel drift in a corner, like the Range Rover Evoque.

Two-wheel drive is (obviously) engaged all the time but the extra two wheels only kick in when needed. This is to save fuel. Speaking of which, I got about 8.4l/100km, or 33mpg.

Inside it is classic Skoda, which means typical VAG solidity. Not everyone likes the dash, but there are several styles to choose from. One thing I don’t get is that we can’t choose the speedometer dials and faces, like we would choose a watch face. There’s probably an explanation and it involves money. Seats are comfortable and supportive. On the test car, the middle row is adjustable fore and aft to allow the rear-most passengers a bit of leg room. The middle seat is split 60:40 to allow various combinations of loads and people and bikes to be taken.

Funny enough, Irish journals don’t liken it to the Range Rover models, whereas UK publications do. The press release compares it to the likes of Kia Sorrento, Hyundai Santa Fe and Ford Kuga, but not the Audi Q5 or Touran. Anyway, it does not have low-ratio gearbox or diff locks, nor does it have the high ground clearance and short overhangs of the serious 4x4s. Instead, it uses electronics to adjust the power and torque to the four corners of the chassis to get the job done. This saves weight and improves fuel economy. Let’s face it, how many owners will end up using these facilities? Another feature that not all owners will use is its ability to tow a horse box with two average-sized horses inside. Amongst the mind-numbing list of options available is the trailer-reversing aid, which takes control of your reversing at low speeds.

New for the Kodiaq is ‘door-edge protection’, a little plastic guard that rotates out of the door to protect it when opening in confined spaces. With advancing technologies, it is possible to insert a SIM card (don’t know where, just trust me) to turn the car into a mobile WiFi hotspot so the kids can get car-sick on their tablets. Or you can use Google Maps instead of a Sat Nav.

The Kodiaq is sold with five seats but the majority of purchases will be for the seven seat version, for only €1,000 more. That’s one problem. Not that you’re likely to carry adults across any continent in them; they’re really best suited for children.

Also the base (Ambition model) 1.4 turbo petrol is rated at 125bhp, interpreted at just enough, but for about €2,000 extra you can have the 150bhp version (now, that’s better) with automatic transmission.  And that’s problem number two — because of these two issues, there is a supply problem and if you want one for next year, get in to your showrooms now.