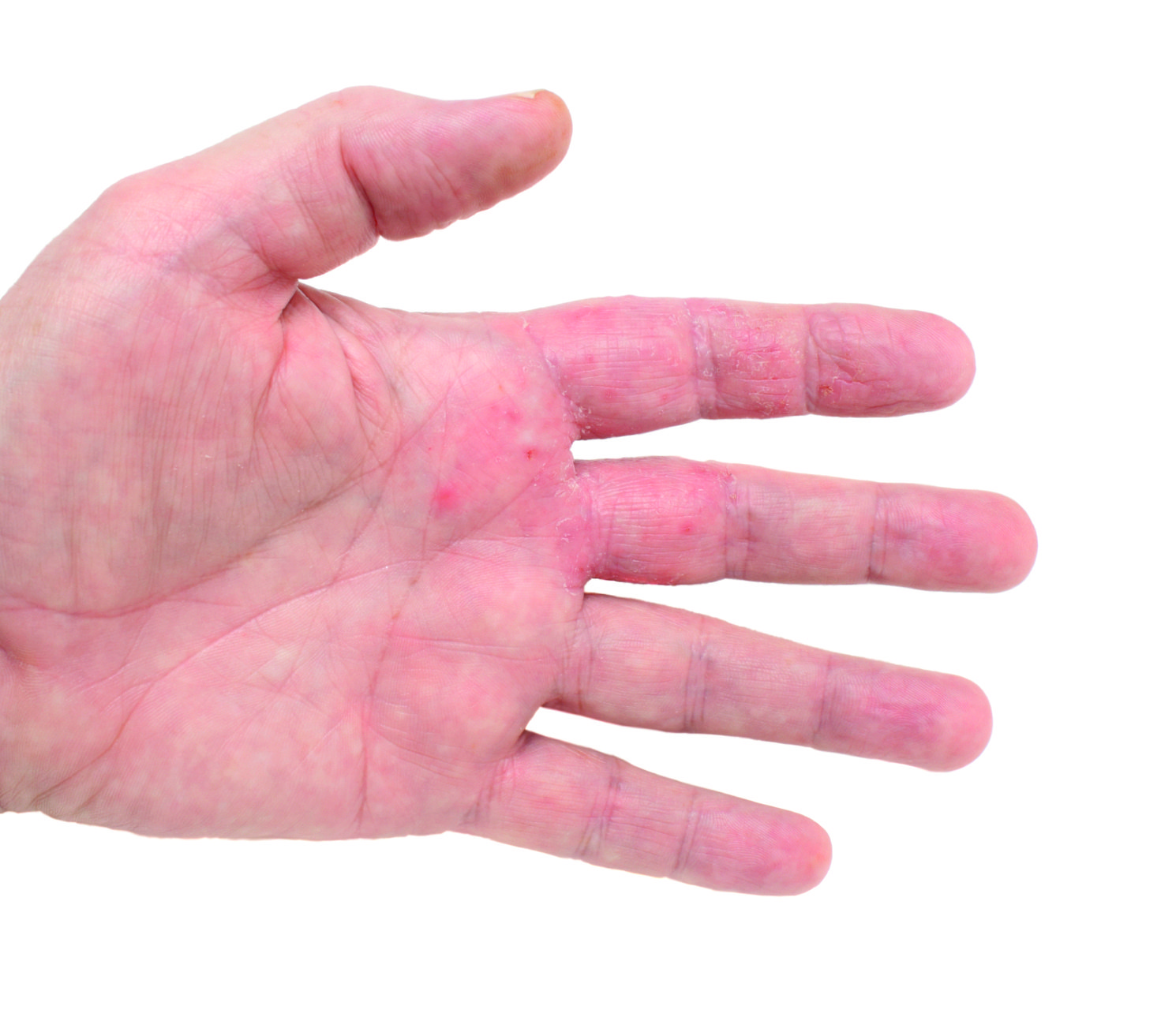 Eczema is a heterogeneous term for a range of inflammatory skin disorders. Atopic eczema is an acute, subacute or chronic, relapsing skin disorder that usually begins in infancy and is characterised by intense itch, which with repeated scratching leads to lichenification, or thickening, of the skin. The disease is associated with a family history of asthma, eczema, hay fever and allergic rhinitis. The unpredictable nature of the disease contributes negatively to the quality of life of the sufferer. There is also a significant financial burden for both eczema sufferers and healthcare providers.

Clinical presentation
Atopic eczema is an itchy, chronic, fluctuating disease with a range of clinical features. The common age of presentation is between two and six months. The diagnosis of atopic eczema is based on a patient’s history and clinical examination. To help differentiate atopic eczema from other eczematous conditions in children, there are certain diagnostic criteria (ie, NICE).
In babies, eczema will normally start on the face but may occur anywhere. Often, the napkin area is spared. When the baby begins to crawl, the extensor aspect of knees becomes most involved. In older children, the elbow and knee flexural areas, neck, wrists and ankles are affected. The skin will often be lichenified from repeated rubbing and scratching.
In Asian and black ethnic groups, eczema will often continue in the extensor rather than flexural areas. These groups will often experience gross lichenification and stubborn eczema. In adults, the pattern is often a similar distribution with flexural involvement and chronic lichenification.

Management of atopic eczema
Avoidance of provoking factors
Patients should in the first instance be advised to avoid potential provoking factors, which include soaps and detergents, house dust mites, animal dander and extremes of temperature.
Some helpful eczema patient tips include:
Avoid soap and use soap substitutes instead.
Use cotton gloves inside rubber gloves for contact with detergents and any other wet work, especially if prone to hand eczema.
Cotton clothing is often the most comfortable choice for the eczema sufferer.
Keep the environment cool.
Children with atopic eczema should sleep in their own bed, as bed-sharing will generate heat and increase itch.
Do not allow pets in bedrooms of the eczema sufferer.

Bathing and emollients
Emollients improve skin texture, promote skin comfort and prepare the skin for active topical therapies. It is well documented that emollients are essential in the control of atopic eczema, even when the condition is in remission.
Emollients are available in many different formulations and can be applied to the skin in various ways. They include wash products such as soap substitutes, cleansers and bath/shower additives, as well as leave-on moisturisers. The choice should depend on the patient’s symptoms, lifestyle and preference.
Bathing is important to cleanse and hydrate the skin. During eczema flares, daily bathing is recommended. Ideally, patients should be advised to soak in a bath of lukewarm water with a bath additive for 10 minutes and no longer than 20 minutes. Emollient wash products should replace soaps, shower gels and bubble baths, which have a drying and irritant effect on the skin. Many soap substitutes have the advantage of being able to be used as a leave-on moisturiser.
In patients prone to flares due to Staphylococcal aureus, bleach baths have proved to be useful. As strengths of bleach vary between brands, Milton sterilising fluid is normally the bleach of choice in Ireland.
Leave-on emollients (moisturisers) are also available in a number of formulations — lotions, creams and ointments. For many patients, cream-based moisturisers are more cosmetically acceptable and easier to use. In addition, if stored in a cool place or in the fridge, they can act as cooling creams, which is useful in pruritus management. Lotions have a higher water content than creams, which makes them easier to apply, however, they have less moisturising effects.
The use of emollients can be confusing for many patients. They are often unsure when to use them and will confuse them with other topical medications. To promote greater understanding in their use, practical demonstrations of their application are beneficial. When applying moisturisers, patients should be instructed to apply downwards in the direction of the hairs and to apply generously to affected and non-affected areas. This will prevent potential blocked pores and the development of folliculitis.

Topical steroids
Topical steroids are often the mainstay of treatment in atopic eczema. The aim is to prescribe the least-potent strength that is effective. Notwithstanding, there is a lot of public misconception around the safety of topical steroids. This misconception is propounded by advice to use steroids sparingly. Topical steroid phobia often means that topical steroids are under-used. It is, therefore, important when assessing response to treatment or when prescribing topical steroids that the correct amount of topical steroid to use is discussed.
The choice of steroid potency should be tailored to the age of the patient, the body region being treated and the degree of skin inflammation. For facial and flexural skin, only mild or moderate potencies should be used.
While steroids are available in many preparations, including ointments, creams and lotions, ointment formulations are preferred in eczema as they have better penetration and are more hydrating. Creams are usually used in weeping conditions, and lotions on hair-bearing areas. With the exception of mometasone furoate, steroids are generally prescribed twice-daily in the first instance. In eczema, it is often best to apply topical steroids at least 30 minutes after emollient application. Steroids and emollients should not be put on at the same time, as this will affect the potency of the steroid. By putting the emollient on first, the skin is hydrated. This will help reduce the stinging sensation that some patients experience with topical steroids.
In educating patients on use, it is important to address how much steroid to use. The usual accepted method is the fingertip unit, where the steroid is squeezed onto an adult fingertip from the distal interphalangeal crease to end of finger. Each fingertip unit represents 0.5g of steroid. The body is divided into five distinct areas and each area, depending on the age of the patient, has a recommended amount of steroid to cover that entire area. In practice this method, though a useful guide for prescribing, can be difficult for patients to understand. Another method that is used is applying enough steroid to the affected area to make the skin glisten or shiny. The patient should after five minutes of steroid application still be able to see where steroid was applied.
The side-effects of topical steroids include skin-thinning, telangiectasia, bruising, perioral dermatitis, folliculitis, contact dermatitis, masking and exacerbation of fungal infections, and adrenal suppression. Care should be used in using steroids in the periocular region as they can lead to cataract development and glaucoma.

Topical calcineurin inhibitors
Topical calcineurin inhibitors are non-steroidal immunomodulating agents. In Ireland, there is only one topical calcineurin inhibitor; tacrolimus, which is available in two strengths, 0.03 per cent and 0.1 per cent. It is only available as an ointment. The advantage of this agent is that it is safe on eyelids and delicate areas. When started, patients will often experience a stinging or burning sensation. This should settle with increased usage. It is the author’s practice to initiate this treatment with a small test initially and gradually extend its usage or to use it initially in combination with topical steroids. In addition, as tacrolimus interfaces with eczema, it is often best not to introduce it at the peak of skin inflammation. Instead, initially reduce inflammation with topical steroids and then introduce tacrolimus. Tacrolimus should not be used where there is skin malignancy or skin infection.

Bandaging
Occlusive bandaging can help to reduce scratching and itch symptoms. If used with topical steroids, they will increase steroid potency. In atopic eczema, paste bandages and wet wrapping are usually favoured. They are especially useful where there is chronic scratching and skin lichenification. They should be avoided where there is infection.
Zinc-impregnated bandages are commonly used with a retention bandage. Wet wraps are usually used in children and are recommended for severe disease. Viscose tubular bandages or garments are commonly used in both wet wrapping and as dry wraps.

Phototherapy
Phototherapy (targeted ultraviolet (UV) radiation) is used to treat moderate-to-severe eczema that is not responding to topical therapies. However, it is only available in secondary care and the patient needs to be under the care of a consultant dermatologist. It is usually used to treat adults and the older child. Children under the age of five years are usually too young to comply with the necessary safety precautions with this treatment.
Phototherapy is highly effective for many patients in inducing disease remission. The drawback to this treatment is that it requires the patient to make multiple visits to the hospital for approximately three months.

Systemic treatments and biologics
Systemic immunosuppressive therapies are used in eczema that has proved to be unresponsive to topical treatments and phototherapy, and where there is a significant negative impact on quality of life. Ciclosporin, methotrexate, azathioprine and mycophenolate mofetil are the most commonly-used such agents to treat atopic eczema. Ciclosporin is usually used as a short-term drug to gain control because of its associated risks of renal failure and hypertension. Systemic steroids are often used in atopic eczema. However, the evidence from studies is that their use only leads to short-term control and repeated courses can lead to refractory disease.
To date, the range of drug treatments for severe eczema has been limited. Until recently, all systemic treatments used in atopic eczema were originally designed to treat other diseases. However, for the first time, a new biologic drug (dupilumab) has been developed for atopic eczema. Dupilumab is a monoclonal antibody that blocks interleukin (IL) -4 and -13. The drug is awaiting licensing/reimbursement in a number of countries, including Ireland.