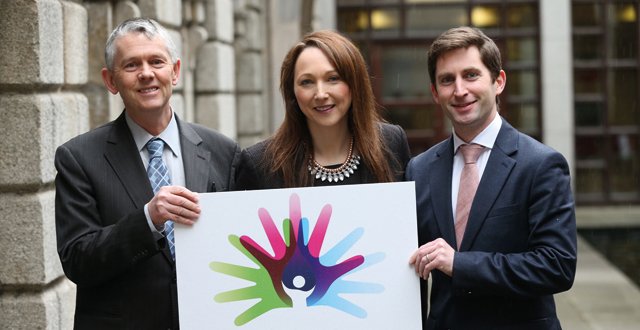 Ireland still has the lowest ratio of clinical genetic staff in Europe, despite the publication of the long-awaited National Rare Disease Plan almost two years ago, a conference to mark International Rare Disease Day, held on February 29 in Dublin Castle, heard.

The conference was organised by the Genetic and Rare Disorders Organisation (GRDO), the Medical Charities Research Group (MRCG) and the Irish Platform for Patient Organisations, Science and Industry (IPPOSI).

A number of speakers from the rare disease community called for the next Government to radically overhaul genetic services in Ireland and to ramp-up implementation of the Plan, as hundreds of patients continue to wait excessive periods to access genetic services, many for periods of in excess of 15 months.

The importance of the patient voice was a key theme of the conference. Limerick woman Ms Rachel Martin spoke movingly about her long struggle to finally get a correct diagnosis of Loeys-Dietz syndrome, a rare connective tissue disorder, after years of misdiagnosis, long waits and delays, and lack of appropriate services.

Mr Philip Watt, Chair of the Rare Disease Task Force, an umbrella body of patient networks and groups with a specific focus on rare diseases, highlighted how genetic services in Ireland are critically under-resourced: “The National Rare Disease Plan was launched in July 2014, yet almost two years on, many of its recommendations remain to be implemented. The resourcing of clinical genetics services in Ireland is fundamental to the diagnosis, care and treatment of people with rare diseases. Current clinical genetics staffing levels are among the worst in Europe and between 70-80 per cent below those recommended by the Royal College of Physicians in London. By way of stark illustration, in a survey of 14 European countries, Ireland came last in terms of the number of genetic consultants per head of population, while Northern Ireland was ranked in sixth place.

It is estimated that there are over 6,000 rare diseases impacting an estimated 300,000-plus children and adults in Ireland. Approximately 80 per cent of these patients are affected by just 350 rare diseases

“Right now, my understanding is that there are several hundred families sitting on critically-long genetics waiting lists for over 15 months in clear breach of HSE waiting times. We need to see information on waiting lists for genetic services being made publicly available so that we can put in place the appropriate resourcing of this crucial speciality. Without access to genetic services, diagnosis is severely delayed, preventing access to appropriate ongoing referrals for management and treatment and vital support services. Meanwhile, a report on the future of clinical genetics services — known as the Smyth Report —makes key proposals on the future of clinical genetic services in Ireland, yet it remains to be published, which begs the question — why?”

Ms Avril Daly, Chair of GRDO, highlighted the impact the lack of genetic services in Ireland has for patients in accessing promising new treatments: “Rare disease patients… are being deprived and delayed access to existing and emerging life-saving and quality-of-life-enhancing medicines because they do not have a proper genetic diagnosis. In real terms, delays in diagnosis mean that a patient may go past the point where a treatment can be impactful for them and, if there is no genetic diagnosis at all, they are unaware of their treatment options.

“Every day of the week we are hearing about ground-breaking research, with the ongoing development of clinical trials and emerging gene therapies. This brings so much hope. However, the rare disease community in Ireland is concerned that policy-makers think genetic therapies and innovative medicines are something to be considered way off in the future. For Irish patients to be able to benefit when these advances begin to be made widely available, we need people with the proper skill sets to be incorporated as part of healthcare delivery now. We welcome the development of a genetics and genomics strategy in Ireland but as it is linked to the development of the National Paediatric Hospital, the completion of which is some years away, we are concerned as to how long it will take to be implemented. Irish people need genetic testing, counselling and care now. We need answers soon from the next Government and not in the distant future. We cannot wait any longer.”

“We are soon likely to go from a situation where we have a few thousand human genomes sequenced to very many thousands, which will yield huge opportunities in identifying those gene mutations that give rise to disease.

“Currently, a referral for genetic testing comes at the end of a long and frustrating road for the patient and their family and is usually made as a last resort. The advances we are now seeing will place genetic testing at the front line of diagnostics — the question is, how long are we prepared to wait for that to happen here?”

Mr Derek Mitchell, CEO of IPPOSI, meanwhile, criticised the lack of information and transparency surrounding the availability and reimbursement criteria for orphan drugs. He called for the development of a unique and transparent health technology assessment system for orphan drugs, emphasising that these products are not about commercial success.

The conference also heard a number of positive updates in relation to rare disease services in Ireland and the implementation of the Plan.

Prof Eileen Treacy, Clinical Director of the National Clinical Programme for Rare Diseases, set up on foot of the Plan, revealed that eight-to-nine Irish hospitals have put themselves forward to be centres of excellence for rare diseases.

Prof Treacy acknowledged that given the nature of rare diseases, many patients would still have to travel abroad for treatment. However, she explained that work is ongoing to create European Reference Networks on rare diseases, which will connect healthcare providers at centres of excellence.

Prof Treacy also introduced Ms Rita Marron of the National Rare Disease Office, which was launched in June 2015 in the Mater Hospital, Dublin, on foot of a key recommendation in the Plan. Last December, the Office launched its official helpline (Tel: 1850 24 1850), which provides patients, families and healthcare providers with information and support relating to rare diseases. The office will move to the site of the new National Children’s Hospital when it is eventually built.

Ms Marron also highlighted the value of Orphanet, the online database for information on rare diseases and orphan drugs (www.orpha.net). Led by a consortium of approximately 40 countries, Ireland has its own entry portal for Orphanet, which is hosted by the Office.

Dr John Devlin, Deputy Chief Medical Officer at the Department of Health and Chair of the Plan’s Oversight Committee, also maintained that much progress has been made in implementing the Plan since its launch, citing the setting-up of the Office and the Clinical Programme. However, he acknowledged that some areas have not seen as much progress as he would have liked.

Dr Devlin said an update report on the Plan’s implementation is due to be published by the Committee before the summer. Speaking to the Medical Independent (MI), Dr Devlin said the report would provide an update on all 48 areas of the Plan. He added that staffing issues are currently being looked at, along with the setting-up of the centres of excellence, which he said would create care pathways and contribute to the development of clinical guidelines.

“There is a reorganisation that needs to go on and these centres are a key priority for this year. We need to do it here, and it is not just for our own patients — these centres in turn will link with the best centres in Europe. So if we can do it very well here, great, but if we can’t, we know where patients need to go to. A small country like Ireland is never going to replicate the services available in [larger countries]… there are up to 8,000 rare conditions and there may be only two-to-three patients in the country with a certain disease,” he told MI.

Also speaking at the conference was Mr Richard Corbridge, HSE Chief Information Officer. He acknowledged that Ireland is far behind many countries in terms of eHealth, but he maintained patient journeys are set to become much more seamless within the Irish healthcare system: “eHealth and the introduction of the electronic health record (EHR) across the Irish health system will have a very positive impact on the treatment and care of all patients, including those with rare diseases.

“The potential of an EHR to provide a consistent and complete record of a person’s clinical history, from cradle to grave, has obvious benefits. For people with rare diseases, where expertise may be spread across the globe, we will be able to link them with the leading clinical experts in their sphere, the latest research opportunities, and up-to-the-minute medical information, diagnostic tools and technology. This will mean faster diagnosis and more timely access to cutting-edge treatment and care. It also means that when people move from one part of the system to the next, that medical and health professionals will have full access to their notes, minimising the risk of information being lost in translation, and time previously spent gathering history being better used to provide treatment and support.”

Medical columnist and retired GP Dr Liam Farrell highlighted the power of social media for rare disease patients. Dr Farrell curates the weekly Twitter chat #irishmed, which has featured a number of rare disease themes and co-hosts, with contributions from all over the world.

He reiterated that rare diseases might be “rare but the problems faced by these patients are common”. Dr Farrell also commented that while healthcare is a human right, there is also a great responsibility to use it wisely, citing the example of free GP care.