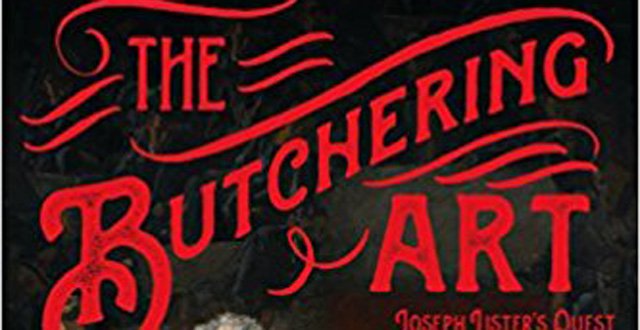 This book is all about Joseph Lister, born 1827, a surgeon, scientist, and proselytiser for antisepsis. He wanted to be a surgeon from early in his life. He was brought up a Quaker and entered University College London (UCL) to study arts at age 17. At that time, many surgeons did not attend university. Lister was in the audience when his future boss Mr Liston first used ether on a surgical patient. Lister brought one of his father’s microscopes to UCL and studied biological objects diligently. While many medical students were drinking and dissipated, Lister was assiduously hard-working. He developed depression aged 21 and was dogged by it for life.

In the 1840s, hospitals were known as ‘Houses of Death’ and reeked of urine, faeces and vomit. The surgeon’s main attribute was speed, but his efficiency and outcomes were marred by dirty theatres, instruments and wards. Erysipelas, gangrene, pyaemia and septicaemia were rampant. Many surgeons believed pus production was a good thing. Close by UCL was UCH (University College Hospital), where Lister did his studies. He microscoped as many tissues as possible and created full-colour clinical paintings of patients.

The prevailing wisdom among surgeons was that gangrene was caused by ‘corruption in the air’.  As a student, Lister prepared microscopic slides of pus, wherein he saw possible ‘morbid substances’. He won gold medals at UCL and in 1852 qualified as a surgeon. Thereafter, he moved to Edinburgh to work under Mr Syme, a surgeon who “never unnecessarily wasted a word, a drop of ink or of blood”.  Lister settled there and later married his boss’s daughter Agnes. The Royal infirmary in Edinburgh had 228 beds (much more than UCH London) and provided great surgical experience. It was soon predicted that Lister “is one who will go to the very top of his profession”.

Lister was fascinated by the process of both inflammation and suppuration. He noted that hospitals had few provisions for washing of hands or of instruments. He was an avid researcher, obsessive note-keeper, revered teacher and, true to his Quaker beliefs, treated all his patients equally. He designed and patented surgical instruments. In 1861, he moved to Glasgow Royal Infirmary, a large hospital with 572 beds.

Lister crossed paths with other scientists involved in research of infection and bacteria, including Semmelweis from Hungary, Snow in London, and Pasteur in Paris. Lister’s first proposal was to use antiseptic to irrigate surgical wounds postoperatively. Then he chose carbolic acid as his first antiseptic. A successful operation on a boy with a compound fracture of his femur was followed by his walking out of hospital instead of leaving in a coffin. Lister’s method involved pouring carbolic acid on the wound dressing to flush it every few hours. By 1866, Lister was refining his antiseptic routine. Lister published his research and surgical outcomes in The Lancet in 1867. From this success, he went on to recommend sterilisation of instruments and hands. Needless to remark, there were doubters. Lister was more popular in Europe than in the UK.

By 1871, Lister was the most revered surgeon in Scotland. He famously operated on a large axillary abscess on Queen Victoria, assisted by the royal physician William Jenner (of smallpox fame). For the first time, Lister used a tube to drain the abscess. He then developed a carbolic atomiser against airborne particles. He had extensive correspondence with Pasteur, and in 1875 went on a triumphant tour of European hospitals. Thereafter Lister, in 1876, sailed to New York and detailed his methods to US surgeons. They disputed his, and Pasteur’s, germ therapy. Lister, however, won his American audience over with his knowledge of dirt, germs, pus, unhealing wounds and the importance of antisepsis. Carbolic acid therapy became accepted and championed.

Aged 50, Lister returned to King’s College Hospital in London and prizes galore followed — personal surgeon to Queen Victoria, a knighthood, Presidency of the Royal Society, and then a peerage. An oral antiseptic mouthwash containing thymol, menthol eucalyptus and alcohol was named after him — Listerine, which you can still purchase today.

An interesting scientist and surgeon. A worthy, if at times a bit wordy, story of a remarkable man. The text is well researched, with 30 pages of notes, an excellent index, and rather gushing acknowledgements. I would have liked to read more of Lister the man. He was greatly loved by his students, who came from all over the world to learn his methods. The arrival of anaesthesia, coupled with antisepsis, revolutionised surgery. Today, we have moved on from antisepsis to asepsis.

A fine homage to Joseph Lister, the book could have been enhanced by a selection of illustrations.

Now, all of you who work in hospitals, wash your hands obsessively and compulsively.