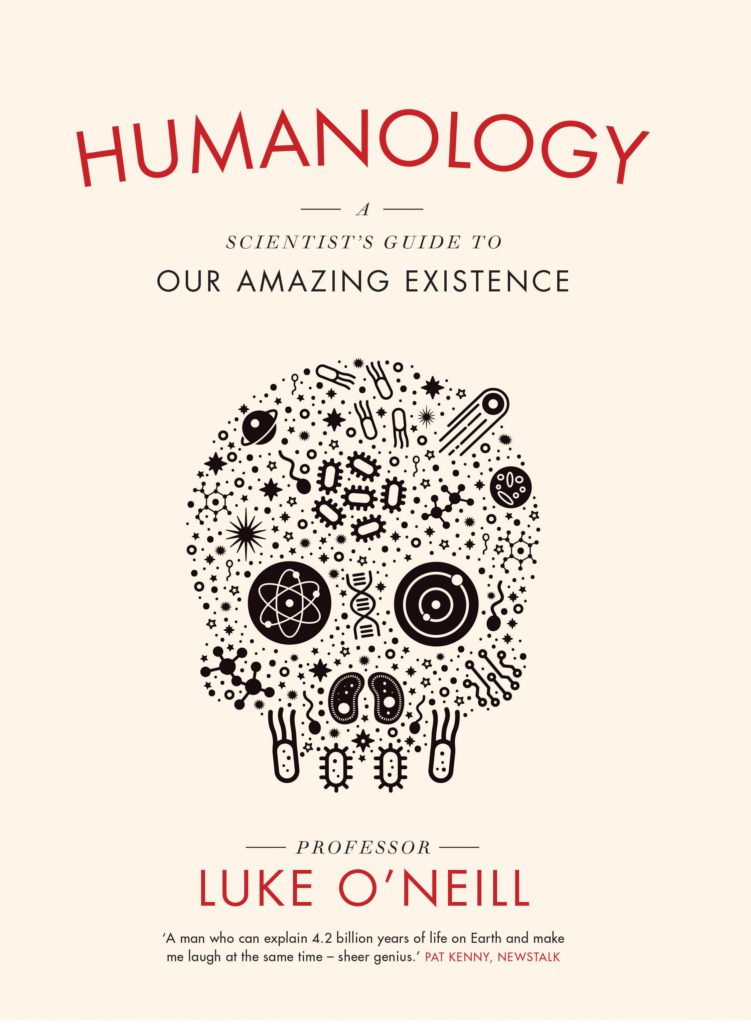 “Achoo, awunchoo.” The MC taps the microphone. “Welcome, Prof Luke O’Neill and Humanology!” The guitarist bounds onstage … minus guitar? Well, today he’s on keyboards – a laptop – and his literary debut is accomplished, charting humankind’s progress from its origins and speculating on our destiny.
Prof O’Neill’s prose has a lightness of touch, almost blindsiding readers to the fact that this professor of biochemistry at Trinity College Dublin is among the world’s best and most cited immunologists. Don’t, however, mistake a light touch – funny one-liners abound – for frivolity. Humanology confirms TS Eliot’s observation that humour is a way of saying something serious: A weapon wielded in defence of intelligence.
O’Neill has serious things to say, some of which readers may disagree with. But disagreement should be welcomed, given O’Neill’s starting point that the arts and sciences “are actually at the same game”. Aiming to reveal “how great science can be as a way of understanding life and what it is to be human”, O’Neill’s use of the word “a” is a subtle, but important qualifier: Acknowledging that although Humanology is subtitled as “A Scientist’s Guide to Our Amazing Existence”, the implication – at least, it’s my inference – is that a scientific culture does not exist, but what does exist is a rich and diverse culture of which science forms a part.
An important aspect of this culture was highlighted by Bryan Appleyard in his Understanding the Present (1992): “Scientists who insist that they are telling us how the world incontrovertibly is are asking for our faith in their subjective certainty of their own objectivity.” As for the certainties of physics, for example, Bertrand Russell noted that: “Physics is mathematical, not because we know so much about the physical world, but because we know so little…,” leading Arthur Koestler in The Heel of Achilles (1974) to speculate that such “resigned agnosticism” might prompt “a new open-mindedness, a sophisticated kind of innocence on a higher turn of the spiral”. This is realised in Humanology.
To undermine a culture, first attack its language, and with specialisation – whether in technology, medicine or philosophy – silting up, rather than freeing channels of communication, the author demonstrates that scientific history can only be expressed meaningfully in language drawn from the arts and humanities.
Over the course of 20 chapters, Prof O’Neill can be read as though you’re listening to somebody down the pub, except that few people down the pub talk at length with such eloquence. Thus, it is heart-warming to learn in chapter 7, “The God Invention”, that “messers” is the word to describe people in Ireland who tend “to stray from the path”. And where chapter 4 explores “The Science of Fertility” I laughed out loud when O’Neill interrupts his discussion on the role of the Izumo protein in spermatozoa production to observe of the availability of sperm that “most adolescent males have a lot going spare”.
Laughter too gets a chapter to itself, and although it features the world’s most popular joke – you’ll have to find out for yourself – Prof O’Neill tempers the undoubted health benefits conferred by laughing with a brief reflection on laughter motivated by malice and other unwholesome traits.
Perhaps Prof O’Neill’s musical background prompted his chapter on why we listen to music and as a former pub band ivory tickler, sharing – I guess – the author’s liking for a firmly struck chord, it was educational to learn about music’s life-enhancing aspects and the “devil’s interval” in Jimi Hendrix’s Purple Haze was a golden nugget. But while O’Neill cites music as a weapon, I would have valued his thoughts on the corrosive impact of muzac on society, with Stuart Sim pointing out in his Manifesto for Silence (2007) that “[t]he link between the corporate and rock worlds has never been closer…”. The human animal may thrive on music, but also craves periods of silence.
The author’s acceptance of cholesterol’s role in atherosclerosis (p 242), is surprising since a causal link between cholesterol and heart disease remains unproven. Indeed, America’s Dietary Guidelines Advisory Committee (2015) noted: “Cholesterol is not considered a nutrient of concern for overconsumption.” And given the author’s reflections on longevity in Japan (p 266), it’s significant that Japanese researchers (Ann Nutr Metab. 2015;66 Suppl 4:1-116) report from there “an inverse trend… between all-cause mortality and total (or low-density lipoprotein) cholesterol levels: Mortality is highest in the lowest cholesterol group without exception”.
Chapter 5 “Irish mammies got it right” is fascinating on nature, nurture and intelligence. But whereas O’Neill speculates in chapter 11 on whether the future is in synthetic nosh in relation to “Our desperate relationship with food,” my Irish mammy got it right when she fed us real food rather than ersatz provender, before sending us out to play.
Humanology is well copy-edited – a Homo sapians (sic) on p 38 proving the rule – printed on high-quality paper, and its handsome cover promises much and doesn’t disappoint. This is because Prof O’Neill not only extols the many virtues of science, while acknowledging possible pitfalls, but deftly, and humorously, contextualises them.