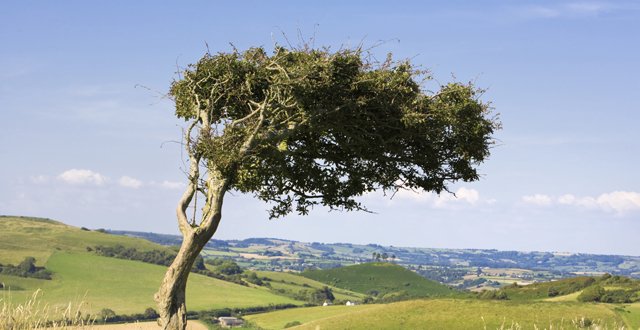 Risk management is what we do. Patients might think differently. They might want guarantees and absolutes. But our job is managing uncertainty. Even if the courts of mass media judgment and the legal eagles have to be brought to the trough of truth and reality. The reality is that we are not God. We can read neither patient’s minds nor read the sometimes cruel future that God has laid out for us and our patients.

These things were on my mind as the half-fallen tree branches cracked and swayed above me. I was alone, standing on the ground with a manual saw in my hand. I tried repeatedly to swing the long, heavy branch in such a way that it might either fall or stay solidly. To fall slowly would be best. So I could get out of its way in time. I remembered all those TV movies where the wood loggers stood back as the tree slowly creaked and gathered momentum and then crashed to the ground. My tree, here and now, was moving from left to right with my tugging but it was not coming down. It was safe for me to work on. Piece by piece. A thousand cuts.

Dealing with a fallen tree is like a lesson on life and risk management.

First you see the massive scale of the work to be done. I looked at the fallen tree and its crown of leaves and branches keeping it in a half-fallen position. All I had was a small electric hand-saw that was designed for small branches, not tree trunks. I knew there was a risk. Although I had never actually seen the movie The Texas Chainsaw Massacre in my 1970s youth, it was on my mind as I constantly considered my risk management strategy. I did not need an accidental blood bath by my own hands nor did I need being caught by an electric wire tied up in branches, nor my legs slipping into danger. I did not need another part of the tree falling on my equipment. I had my mobile phone if I got in trouble, but it was out of range. Better not to get into trouble in the first place.

Considering the massive job of work ahead of me, I thought what I have grown accustomed to thinking, with ALL problems in life: ‘Just get started on the easiest and the smallest part of the problem. Break the problem down into small manageable parts. You could walk around the world if you just took one step at a time.’

This reminds me that my car has 330,000km on the clock. That is 8.5 times around the world’s circumference of 40,000km at the equator. One step at a time. A medical life is lived one patient at a time. Some 40 patients a day is 10,000 a year is 400,000 in a medical lifetime. You could live your medical life by seeing 10 patients every kilometre as you walked around the equator, over a 40-year career. One Day at a Time the song sung by Gloria Smyth from Navan goes, also in the 1970s. It was obviously an influential time for me! Helped me enormously with risk management. This song became the biggest Irish hit of all time. The song spent a total of 90 weeks (no misprint!) in the Irish top 30 chart and we began wondering if it would be on the radio forever? No wonder I was heavily influenced by this song title. Driving around the world at 50 miles per hour would take 500 hours or three weeks to do the 25,000 miles. That is 30 times around the world while Gloria was still singing on the radio.

I tried my small electric saw on a few small branches. It got stuck in the bigger trunk now sleeping quietly on the ground. I could not fix it. It was burnt out. Another trick in life: ‘Maybe a bad thing is a good thing.’ Now that it was broken I was forced to use a safer method. A hand saw. Because the saw was new I flew though the work and was very impressed at myself. This recent whole-food, plant-based food I began eating lately seemed to be giving me extra endurance and energy. My reflexes lately seem to be faster as well. I will need fast reflexes to be able to move away nimbly from any unexpected falling branches.

So why am I taking these risks? Am I an idiot? Could I not get a tree surgeon in? The answer is in the word ‘surgeon’. I always like working with my hands and GP-land has far too much writing for my liking. I feel very much alive when I am working on the tree. Pitting my energy and brains against the much bigger Goliath. The physical effort along with the constant awareness that risk needs to be planned for, brings a certain adrenaline. Why does awareness of risk, injury and death bring such feelings of being alive? It brings all our talents and abilities into focus. How can a small man bring down a large dangerous tree?

And I began to understand the debate that is gaining momentum after storm Ophelia.

Kite-surfers in Blackrock, Dundalk. Swimmers in Salthill, Galway jumping off diving boards. No sign of Teresa Mannion from RTÉ. They are taking ‘insane’ risks and putting frontline workers at risk. Let us jail them or fine them or hang them. Although hanging is risky too. And we all know that frontline working is always risky. It is the unexpected more than the expected that is often the killer. And so it is no surprise that neither the swimmers nor the kite-surfers were killed. And it is no wonder also that this is where the mass gossip and legislative focus is. Let us hinder people’s rights to do dangerous things. They have laws in North Korea and China for taking risks, you know. I often think that politicians should do a compulsory course in democracy when they gain office. Continuous professional development of sorts. Module 1: People have the right to put themselves at risk. Module 2: All living involves risk. Module 3: Feeling ALIVE involves risk. Taking the risk of loving, or trying something new. Risking success or risking getting on a bicycle for the first time. Travelling, driving, flying and train journeys all involve risk. Who is to decide what is insane risk? War is an insane risk and yet governments mandate it. Conscription.

I think we risk fascism if we try to force people to stop taking risks. Better to allow frontline workers the choice to say no to unreasonable risk. The nudge of education and choice is better than the force of the State.