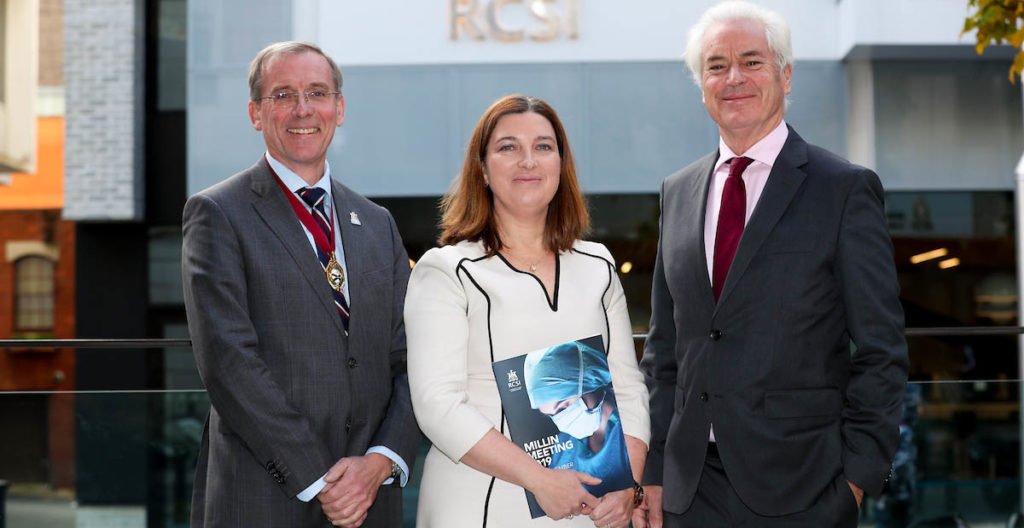 The recent Millin Meeting in the RCSI looked at risk in surgery in the private and public hospital sector. David Lynch reports

ospital capacity challenges, staffing levels, legal concerns and the need for greater risk management education were among the many topics raised by speakers at the recent Millin Meeting 2019, which was held in the RCSI earlier this month.

This year’s event was titled ‘De-Risking Surgery: For Surgeons and Patients’ and the meeting welcomed a range of speakers from across the island.

Dr Philip Crowley, National Director of Quality and Patient Safety at the HSE, told attendees that the health service remains compromised of many separate “silos in which people work”.

“We talk about getting integrated organisations, I’m sure we will create them, but that won’t create integration,” he said.

“What will create integration is people working differently… we obviously spend a lot of our time patching people up when they are not well; that’s the focus of the service. But I don’t think we are spending nearly enough time trying to get ahead of that and focus on prevention.” He added that the Irish health service remains a “very hierarchical organisation”.

However, despite the challenges, he said there were “many positives”.

“I remain resolutely optimistic about the service,” according to Dr Crowley.

But he said despite many good indicators, there “is performance that is persistently poor”.

Dr Crowley pointed to waiting lists as one of the main areas of concern.

He said, however, there had been “a lot of advances in the area of quality improvement”.

Dr Crowley added that the creation of an independent HSE board has and would continue to assist improvements in quality at the Executive.

“It is great to have a board. I used to be a member of the HSE board; you can imagine what kind of accountability that was — I was calling myself to account,” he said.

“Things are a lot healthier now that we have an independent board. It is challenging, but it is exactly what we need.”

He said it was important “through partnership with our own staff that we trust and enable them to make the improvements that they see fit”.

Speaking from the floor of the meeting, Prof Sean Tierney, Dean of Professional Development and Practice at the RCSI, responded to Dr Crowley on the HSE board, saying that he suspected “that the agenda starts with the budget for this year and the over-run, the budget for next year, then it moves on to the people on trolleys, then the people on waiting lists”. Prof Tierney said that he suspected only then, issues around quality improvement would be discussed.

“That would characterise most meetings, I’d say,” replied Dr Crowley. However, he added that having patient representatives on the board was a good start.

“If we do not address the environment we are working in and improve it, our improvement efforts will fall away.”

The meeting was also addressed by Dr Cathal O’Keefe, Head of Clinical Risk at the State Claims Agency. One of the messages that Dr O’Keefe delivered was to encourage doctors to report incidents to the National Incident Management System (NIMS).

“We can tell from the system who reports incidents,” he said.

“By far the most likely to report is nursing and midwifery staff. Unfortunately, medical [staff] are well down the list [in terms of reporting]. Some of this may be to do with how reporting systems are set up in hospitals, but I think what we would very much like to see is a big rise in this [reporting by doctors], because it would mean that doctors and clinicians were taking safety management seriously as part of their work.”

“Because the mantra we use is ‘no notes, no defence’. So you could say, ‘I did it all right’, but if it is a complex claim and a number of things have gone wrong and there is no documentation proving what happened, it will make it very difficult for us to defend, even if you did what you say you did.”

“I think we have far too few beds. I think there does need to be investment at the frontline…we are treating more and more patients every day on trolleys,” he told the meeting.

“There are a vast number of unfilled posts and this directly affects surgery, from neurology through to general surgery. This problem is in the newspapers every single day.”

He said that everyone knew about the problems of overcrowding and a system “bolstered by locum support”.

“I think burnout will become more and more prominent as goodwill medicine continues and people work outside their prescribed hours at night-time and weekends.”

Mr Moloney also strongly advocated for the widespread introduction of e-health as a way to tackle risk in hospitals.

“We don’t have an electronic [health] record. There is no joined-up thinking — if a patient comes to Limerick and ends up in Tallaght, it’s a different chart, different investigations,” he said.

“The hospitals are still paper-based, by and large. That is an inherent risk.”

Prof Paul Burke, Council member of the RCSI and Consultant Vascular Surgeon, University Hospital Limerick and St John’s Hospital, Limerick, said that the current health system clearly makes it harder to deal with risk, because “we are continually putting out fires”.

“For example, in Limerick this year [we had], massive numbers of patients on trolleys. We know this and I go to the meetings and complain to our finance people that we need more money.

“Then we say we need more staff, that we can’t get enough physicians.

“However, against that, you look at the outcomes for our mortality data and all the other performance data and you actually, to your own surprise almost, say ‘actually, we are doing very well’.”

Prof Burke also warned that because HSE public hospitals were a public service, “ultimately, we have to be very careful to get the balance between dissing our own system and not doing it to the extent that the patients and the public lose total confidence in the system, because it is the only system they have got.”

When summing-up the role of the clinical director in the modern hospital setting, Prof Burke said “your role in terms of governance is to provide as safe a service as possible” and maintain morale among clinical staff.

Speaking about the experience of model 3 hospitals in the regions, Prof Peter M Murchan, Consultant General and Colorectal Surgeon, South Tipperary General Hospital and University Hospital Limerick, said model 3 hospitals are “facing the abyss” if capacity issues are not addressed and young surgeons are not attracted to these hospitals.

He said wages should be increased for some posts to encourage surgeons into the regions.

“Let’s pay them more. This common [consultant] contract is a nonsense in my view… we should not [all] be paid the same.”

Mr Murchan also mentioned what he described as the “elephant in the room”, which was the “clinical paralysis resulting from litigation risk”.

He added that risk should be taught at medical school level. “We need to start at the beginning; this needs to go back to medical school. So we need to have risk management organically grow [in medicine]… it needs to be ingrained from day one.”

Dr Cliona Murphy, Chair of the Institute of Obstetricians and Gynaecologists at the RCPI, outlined the advances and “huge improvements” made in the area of obstetrics and gynaecology in recent decades.

During the questions and answers session, she also noted the issue around fears over litigation. “Ireland is way [out of] line with regard to litigation awards. When compared to the UK, you have to wonder about that,” she said, adding that it “was not as if” Irish obstetricians were worse at their jobs than their UK colleagues.

Speaking at the beginning of the event, Mr Kenneth Mealy, President of the RCSI, said “risk management is always challenging, especially in a never-ending era of fiscal constraint and less-than-ideal healthcare structure and increasing societal expectations”.

“I am convinced, however, that until we accept that many of the challenges we face in this area are under our control, we will not make progress on mitigating risk for both our patients and ourselves.”