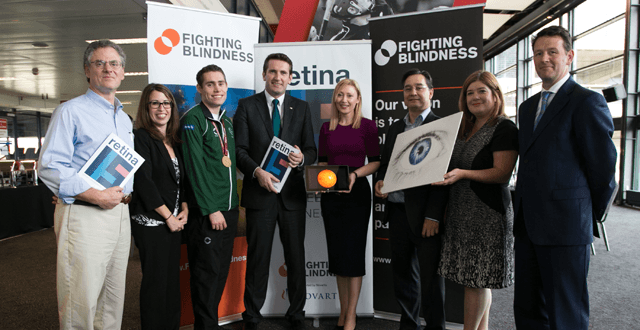 The Retina Conference is an annual event organised by Irish patient-led charity Fighting Blindness, and 2015 marked the 15th year of the event, which took place in Croke Park, Dublin, from 5-7 November. The Twitter hashtag for the event was #RetinaDublin.

The three-day event (roundtable day, scientific day, and public engagement day) facilitated networking between Irish and international colleagues, leading to future collaborations and catalysing the next generation of vision research.

The conference was officially opened by Minister Aodhán Ó Ríordáin, Department of Justice and Equality, who stressed the importance of listening to patients and making services “a genuine partnership”. Retina 2015 provided “a unique opportunity for clinicians and scientists on home soil to inform their own clinical and scientific practice by hearing first-hand from some of the most eminent researchers around the globe. It was  also an opportunity for patients to be equal partners in learning from, and asking questions of, researchers on the latest innovations, therapies and treatments”, the Minister said.

Dr Graham Love, CEO of the Health Research Board (HRB), discussed the importance and role of public and patient involvement in health research, and the HRB’s effort to develop and promote their participation. Patient involvement in the research projects it funds is a new focus for the HRB, and has been integrated into its 2016-2020 strategy, with specific criteria being developed for new research applications on how patients will be involved at each step of the proposed research, from study design, to participation to evaluation, Dr Love explained.

Keeping to its ethos of patient involvement, the scientific day featured an inspiring talk by Ms Annie Mae O’Mahony, who went blind in her mid-twenties but now manages a community radio station in Loop Head, Co Clare. The conference also heard from Derry man Mr Jason Smyth, who holds the title of the fastest paralympian on the planet. He was diagnosed with Stargardt disease at the age of eight years. The condition, which affects his central vision, has deteriorated since then and he now has approximately 10 per cent vision.

The conference heard that over the past number of years there has been remarkable progress made in the quest for treatments for retinal dystrophies, and many promising therapies are now at the translation phase from academic research to clinical stage research.

One of the key speakers was the inventor of the retina implant or ‘bionic eye’, which aims to give artificial vision back to patients. Prof Eberhart Zrenner, University of Tubingen and Tubingen Eye Hospital, Germany, discussed the treatment of hereditary retinal degeneration using transcorneal electric stimulation (TES). Results in several animal experiments have supported the beneficial effects of TES on the retinas of rats in vivo and in vitro on the survival of various retinal cell populations. Neuroprotective effects due to the release of endogenous growth factors by TES have been observed in several preclinical studies, he explained.

Outlining the latest human studies, including his own, Prof Zrenner summarised that TES has been found to be safe, with encouraging results. Adverse events to date were mainly dry eye, which he said has always been treatable by artificial tears. A major new study involving 180 patients is now in development.

Prof Zrenner said he believed it was currently a very exciting time for research developments across a range of eye conditions: “Many patients who have received electronic retinal implant technology have reported some restoration of vision and the ability to distinguish faces, identify mid-sized objects, including phones, and some of them even the ability to read letters. This is a pivotal time in vision research as new therapies—whether they be gene therapies, stem cell therapies, drug therapies, electrostimulation, retinal implants—become available to help patients maintain or regain some vision, making real what was once considered impossible. Never has there been a more exciting time in global vision research. People with sight loss can be very hopeful for the future.”

Meanwhile, Dr Volker Busskamp, a research group leader and a ‘Freigeist’ fellow at the Centre for Regenerative Therapies of the Technical University Dresden (CRTD), Germany, spoke about his group’s research on developing and applying protocols to generate retinal cell types of therapeutic interest from human-induced pluripotent stem (iPS) cells that will also be subjected to cell replacement therapies. He said, to date, his results demonstrate that, despite the diverse genetic origin of retinitis pigmentosa, the targeted expression of optogenes to retinal neurons could restore significant functionality to the visual system following degenerative changes. Furthermore, non-coding miRNAs might help to repair persisting photoreceptor cells.

The conference also heard from Prof Rocio Herrero Vanrell, Complutense University of Madrid, Spain. One of her main research areas is ocular drug delivery with special expertise in microencapsulation of drugs for the treatment of posterior segment diseases. She discussed intravitreal administration of biodegradable microspheres (MSs), saying it offers an excellent alternative to multiple administrations, as it is able to deliver the active substance in a controlled fashion for extended periods of time and disappear from the site of injection after delivering the drug.

Furthermore, contrary to larger devices, administration of MSs was performed without the need for surgical procedures, and was useful for retinal repair and personalised therapy, she explained.

Meanwhile, Dr Shannon Boye, University Of Florida, US, summarised efforts to develop gene therapies for photoreceptor-mediated, inherited retinal disease. She reported how her team has demonstrated the ability to restore visually-guided behaviour and preserve retinal structure in several animal models of Leber congenital amaurosis (LCA1). Dr Boye told delegates how they were now working with a pharmaceutical company to bring this treatment to the clinic.

A total of 28 research studies were submitted to the conference, and the posters were on display during the event.

One interesting project from UCD found that Histone Deacetylase (HDAC) inhibition is effective in restoring visual function and rescuing morphological defects in a zebrafish model of retinal degeneration.

The winners of the 2015 Geraldine Duggan Award were Dr Kirk Stephenson and Dr Matt Carrigan for their work on the Target 5000 project.

Target 5000 is a Fighting Blindness research project, which aims to provide a genetic diagnosis for people in Ireland who have a genetic retinal condition.

The purpose of the project is to identify every retinal disease-causing gene mutation in the Irish population by DNA sequencing the estimated 5,000 Irish people believed to have a degenerative retinal condition. It represents the first comprehensive population-level survey of the mutations causing retinal degeneration across the island of Ireland and Fighting Blindness says it is the most ambitious project it has undertaken to date.

The results of the Target 5000 study will potentially enable patients to access the growing number of clinical trials for gene therapies and other mutation-specific treatments, and will enable researchers to focus on treatments that will benefit the greatest numbers of patients.

The project began in 2012 as Target 3000 and was based solely in the Republic, with two sites in Dublin. In 2014 it was expanded to include a site in Belfast and became an all-Ireland project.

Until now, one of the challenges confronted by someone who has one of these conditions was the lack of a precise diagnosis. It is not uncommon to have a patient given a clinical diagnosis of one condition to be found to have a different condition after genetic testing.

Receiving a complete diagnosis requires genetic testing. Through genetic screening of the person affected and their family members, Target 5000 will provide more detailed information about the nature and inheritance pattern of the condition.

The researchers will investigate mutations in genes associated with retinal degenerations. There are approximately 200 genes known so far, and these are estimated to account for conditions in almost 60 per cent of people affected.

Almost 900 people have already registered to take part in Target 5000 and have donated a blood sample. The target is to have all eligible patients registered by late 2018.

Speaking to the Medical Independent, Mr Keegan said a lot of positive work was being done on preventable blindness, including the national diabetic retinopathy screening programme, Diabetic RetinaScreen, but treatment advances in inherited retinal diseases were now a priority.

“But to access those treatments we need to have the proper phenotype, we need to know what the condition looks like, that it is properly described and has a proper gentype so the Target 5000 project gives us the opportunity to do this for Irish patients,” Mr Keegan explained.

Hospital clinics for the project have already been set up in Dublin and Belfast, and as the project develops, clinics will be established  nationwide. “So we are relying on doctors to refer their patients, and patients who refer themselves, via Fighting Blindness to us, so to be seen in these specialist clinics. We assess them, perform a blood test and then they can be genotyped through the genetics [lab] in Trinity College. The next phase is to get clinically accredited genetic testing and link that then to genetic counsellors. They were the bits that were missing in the programme so we’re closing that off.”

Mr Keegan said Target 5000 would provide a template for patient registries with other retinal diseases and conditions, such as AMD, glaucoma and retinal detachment.

“Target 5000 is a headline project for Fighting Blindness, as it is at the core of everything that they do…Once we have that phenotype and genotype information from the patients we can start directing them towards therapies like gene therapy, artificial retinas, growth factors, optogenetics, or stem cells. To guide them and advise them properly you need to have that information, and Target 5000 is the first step towards that,” he said.

Ms Avril Daly, Chief Executive, Fighting Blindness, said: “The Government needs to understand that the model of healthcare is changing and if patients in Ireland are to receive the most up-to-date treatments for unmet needs, registers for not only rare but common diseases too should be developed. Target 5000 offers an excellent model and infrastructure on which to develop a national registry of patients with eye disease, including the more common conditions such as AMD, and we would urge the Government to build on its success. We call on the Minister for Health to make this a public health priority.”