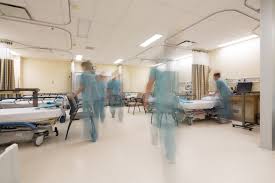 The National Clinical Programme for Acute Medicine is the largest of the HSE’s national clinical programmes, with 50 per cent of all medical interactions in the country comprising acute medicine.

AMUs are located in Model 4 hospitals, AMAUs in Model 3 hospitals and MAUs in smaller, Model 2 hospitals like Mallow, Ennis and Nenagh.

According to Prof Garry Courtney, Co-Lead of the HSE National Clinical Programme for Acute Medicine, some 100,000 patients went through acute units last year and about 20,000 were not admitted.

Some 45 acute physicians have been appointed to the Acute Medicine Programme in the last five years, but Prof Courtney says many more physicians are required.

AMAUs have a target whereby a senior clinical decision-maker should see a patient within one hour. However, according to Prof Courtney, the target is not being met.

This is because hand-held electronic devices and adequate information and communications technology (ICT) are required to accurately capture this metric, advised Prof Courtney, who is also Clinical Director at St Luke’s Hospital, Kilkenny.

“Units are not reaching that benchmark, but that is what we’re aiming for. But we won’t be able to prove that until we get better ICT. That’s a problem in Ireland,” Prof Courtney told the Medical Independent (MI).

AMAUs facilitate the assessment, diagnosis and treatment of patients before a decision is made on admission or discharge, usually within a target time frame of six hours. Same-day radiology and cardiac diagnostics are required to facilitate this.

They aim to help avoid admissions to hospitals and so-called ‘boarded patients’. For this very reason, there are no beds in AMAUs, only trolleys.

“The bigger the amount of boarders in an AMAU, the more dysfunctional it is and the worse the flow is. Boarding is a measure of dysfunction,” Prof Courtney advised.

AMAUs also aim to decrease length of stay (LOS). To date, AMAUs have decreased LOS by 1.6 days, according to Prof Courtney.

“If we brought that up to two days, that would have an enormous impact on trolleys,” he added.

Unfortunately, to date, the reduced LOS is not having an impact on alleviating emergency department (ED) waiting times. The Acute Medicine Programme aims to “eliminate trolley waits for medical patients”.

“The reason for this is that not enough patients are going through the AMAUs,” Prof Courtney told MI.

Last year, 20 per cent of patients going through AMAUs avoided admission to hospital. Prof Courtney believes this needs to rise to 40 per cent in order to have an impact on EDs.

It is not known if the introduction of AMAUs has had an impact on mortality rates nationally. However, data from St James’s Hospital, Dublin, has shown that its unit has reduced mortality, Prof Courtney said.

In 2010, the Acute Medicine Programme aimed to “reduce the admission rate of patients by 10 per cent per year for three years post full implementation without increasing 30-day readmission”.

Readmission rates have not gone up, Prof Courtney advised, illustrating that AMAUs are achieving this objective.

The Programme also sought to generate medical bed-day savings of 10 per cent per year for three years post full implementation. However, there is still a shortage of acute medical inpatient beds in Ireland and bed occupancy in hospitals remains dangerously high.

“Bed occupancy in Ireland is woefully too high… Over all the country, it is probably over 95 per cent, which is dangerous. It’s too high. It should be no more than 85 per cent. In some hospitals, it’s over 100 per cent because there are more patients than beds,” Prof Courtney commented.

Prof Courtney believes AMAUs may have put a cap on bed occupancy but they have not reduced it. This is because the population is rising and more people are living longer, resulting in increasing demand for healthcare.

“So we’re just running to catch up. We’re running to stand still. If we weren’t there, I think that trolleys would be on the lawns outside the hospitals rather than in the corridors… I don’t think we’ve reduced bed occupancy because as quick as we free-up beds, there’s more patients to fill them.”

The HSE’s Report of the National Acute Medicine Programme (2010) sets out how acute medicine in Ireland should be organised and introduced the concept of an ‘acute floor’.

“The precise configuration of the acute floor will depend on the services provided in each hospital but the aim should be to co-locate on a floor, or on consecutive floors, the entire range of acute services which are available on-site.”

Plans to introduce acute floors are still in train and will be facilitated by the introduction of an Acute Floor Information System (AFIS), which is due to launch next year following a pilot period in the South/South West Hospital Group.

According to the HSE, the system will allow real-time electronic recording of patient interventions in EDs, AMAUs, Acute Surgical Assessment Units (ASAUs) and injury units.

The aim is to track and monitor patient attendance and to improve patient flow throughout the hospital.

Prof Courtney noted that the system will mean all patients, irrespective of the department or hospital they are located in, will be measured and counted in the same way.

The concept of an acute floor, according to Prof Courtney, doesn’t exist anywhere in the world and is currently being developed by the HSE Acute Hospital Division.

Acute floors would be horizontally integrated and all wards and floors could be connected by the AFIS.

“Most hospitals don’t have an acute floor because they’re old, but you can still have them,” Prof Courtney added. “When you look at AFIS, you will see who is waiting where, and where the long waits are, and then you can divert patients accordingly.”

The new developments will help move patients from EDs and reduce queues, it is hoped.

“If you take half the patients away from any ED in Ireland, you’ve got no queues. It takes away queues for the patient but it also improves the working environment for the doctors, nurses and staff in the EDs. There’s a problem in EDs with burnout so this is definitely going to help prevent that. That’s the whole idea. This would be coming out of trying to make the environment for staff better as well,” noted Prof Courtney on the acute floor concept.

All patients are assigned a National Early Warning Score (NEWS), as in the UK, where AMUs have also been developed.

In the UK, regular audits are undertaken to demonstrate the value of units. However, in Ireland, AFIS is required in order to conduct similar audits and to measure outcomes, Prof Courtney argued.

Indeed, other countries such as Holland are examining the introduction of AMUs nationally.

An article published last year in the European Journal of Internal Medicine, titled Acute Medical Units: The Way to Go? A Literature Review, found that AMUs could potentially provide benefits in relieving pressure on the Dutch hospital system.

In a bid to further improve services, a move away from specialisation and a greater emphasis on generalism is also required in Irish hospitals.

While there will always be a need for specialists in hospitals, there has to be a bigger role for generalists, Prof Courtney believes. The concept of generalism has disappeared somewhat from the hospital system, he added.

“I think AMAUs are encouraging generalism and I think that’s a good thing,” Prof Courtney said.

The acute hospital bed review currently underway will, it is understood, highlight the shortage of acute inpatient beds but will also reveal how many beds are required in each hospital.

However, the introduction of new beds could take some time. A better, short-term solution, in Prof Courtney’s view, would be freeing-up acute inpatient beds currently occupied by long-term patients fit for discharge to rehabilitation or long-stay units.

Ward cohorting could also yield benefits. Currently, doctors have a patient or two in every ward in the hospital but if ward cohorting was introduced, it would have numerous advantages for patients and staff.

“If you were a respiratory physician, for instance, it would be much better for you to have hopefully all, or at least the majority, of your patients on one ward. Then you would be able to do all your work without wasting your time running around the hospital,” Prof Courtney said, as an example.

“That is the ‘Holy Grail’. That’s what we’re looking for and it means patients aren’t moved around the hospital a lot. Cohorting works. It is highly efficient. But it needs a lot of energy.”